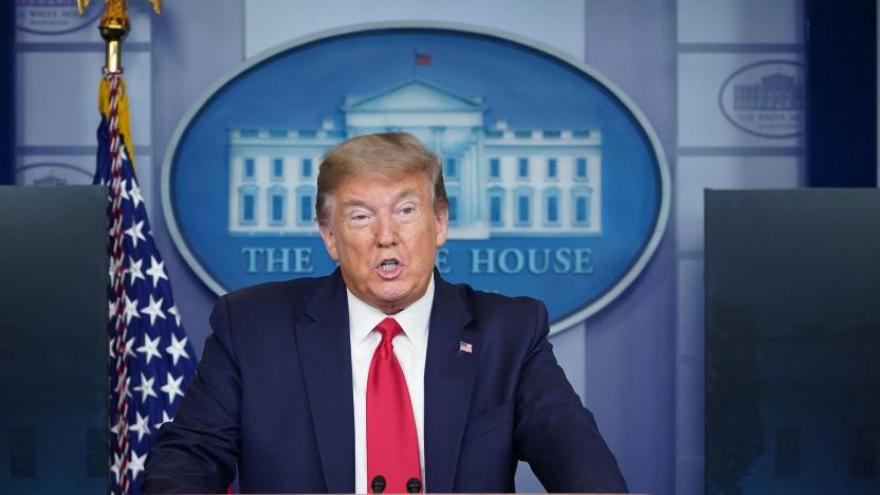 President Donald Trump said that he will ask for a delay to the 2020 Census to make sure it is completed safely and accurately.

(CNN) -- President Donald Trump said Monday that he will ask for a delay to the 2020 Census to make sure it is completed safely and accurately.

"During this difficult time we're also working to ensure that the 2020 Census is completed safely and accurately. We may be asking for an extension because, obviously, they can't be doing very much right now. They wouldn't even be allowed to do it. So the Census, we are going to be asking for a delay, a major delay," Trump said.

The late revisions to the Census data collection timeline mean officials need more time to compile the data that is used to apportion members of Congress among the states, as well as the data that states use to draw congressional districts. Federal law requires some of that data be compiled before the end of this year.

Trump said that the Census Bureau will ask Congress for a 120-day extension, which he feels is not long enough.

"In addition, as millions of Americans continue to complete their questionnaire online, the Census Bureau asked Congress for a 120-day extension. I don't know if you even have to ask them. This is called an act of God. This is called a situation that has to be -- they have to give it and I think 120 days isn't nearly enough," Trump said.

House Oversight and Reform Committee Chair Carolyn Maloney, a New York Democrat, said in a statement that Commerce Secretary Wilbur Ross announced the plans during a conference call with lawmakers.

The Commerce Department acknowledged the timeline changes and said in a statement it is "seeking statutory relief from Congress of 120 additional calendar days to deliver final apportionment counts."

The department said it is developing a plan to re-open hundreds of field offices nationwide on June 1 and begin deploying tens of thousands of enumerators nationwide soon after. Among the important tasks of those Census takers is to go door-to-door to homes that have not responded to the Census.

Maloney said the call was "hastily" arranged and complained that the director of the Census Bureau was not included.