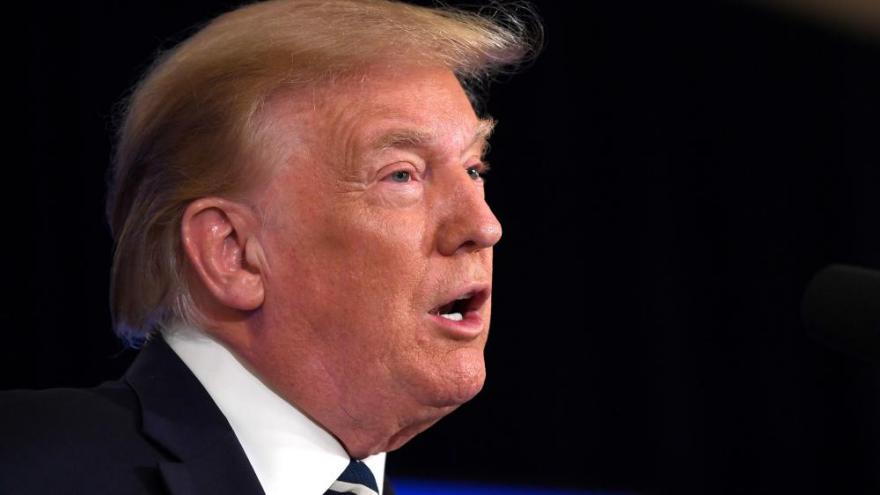 President Donald Trump, here speaking at Trump National Golf Club Bedminster in Bedminster, N.J.,August 7, 2020, said Monday that he will deliver his convention speech accepting the Republican presidential nomination from either the site of the 1863 Battle of Gettysburg in Pennsylvania or the White House in Washington, DC.

(CNN) -- President Donald Trump said Monday that he will deliver his convention speech accepting the Republican presidential nomination from either the site of the 1863 Battle of Gettysburg in Pennsylvania or the White House in Washington, DC.

"We have narrowed the Presidential Nomination Acceptance Speech, to be delivered on the final night of the Convention (Thursday), to two locations - The Great Battlefield of Gettysburg, Pennsylvania, and the White House, Washington, D.C," Trump tweeted, adding, "We will announce the decision soon!"

A federal law known as the Hatch Act generally forbids the use of government property and employees for political activities with some exceptions. The President and vice president are exempt, but by using the White House as a backdrop for a nationally televised convention speech, Trump would risk ordering government staffers to violate the Hatch Act, experts say. Some previous officeholders sought to limit political activity in the White House by holding political events elsewhere or in the residential spaces of the presidential mansion.

The President said last week he was considering delivering his speech from the White House after abandoning his plans to deliver the speech from Jacksonville, Florida, because of health concerns due to the coronavirus pandemic. The convention, which was originally scheduled to take place in Charlotte, North Carolina, is slated for later this month, from August 24-27. Trump moved his speech to Jacksonville after North Carolina's Democratic governor raised public health concerns about having a huge gathering in Charlotte.

"I've been to Gettysburg numerous times," Trump said during a news briefing on Monday evening. "It's a national park. It's a national historic site. It's incredible. ... It is a very important place in our country, so we're looking at that."

"The White House would be very much easier for Secret Service, you see what just went on here," he said, moments after being rushed out of the briefing room because of a security threat.

He said the White House would be "a lovely place" for the event, and the "least expensive place."

"There wouldn't be any expense or extraordinary expense," he said. "This is a government expense."

Trump said he was considering having an audience for the event, and there would be "plenty of room at both locations."

President Abraham Lincoln delivered his famous "Gettysburg Address" at the dedication of the Gettysburg National Cemetery in Pennsylvania after the Battle of Gettysburg. The battle was considered a turning point in the Civil War, and was one of the bloodiest battles of the war. The Gettysburg National Military Park protects the site of the battle, and the park is managed by the National Park Service.

The battle was fought from July 1-3, 1863, and the Union's victory ended Confederate General Robert E. Lee's second invasion of the North.

Trump compared himself to Lincoln earlier this year at a Fox News town hall that took place at the Lincoln Memorial. Trump complained that he has been treated worse by the press than Lincoln, who was assassinated after emancipating the slaves during the Civil War.

Last month, Trump was overheard reiterating support to keep the name of a US military base named after Robert E. Lee during a conversation with Senate Armed Services Chairman Jim Inhofe, according to The New York Times. Trump has vowed to keep the names on Confederate military installations, after some have called for their removal.

The police killing of George Floyd in Minnesota and others has led to a nationwide reckoning over systemic racism and the removal of Confederate statues by protesters and city leaders. Controversial monuments, especially Confederate monuments, have been the subject of nationwide debate for years.

This story has been updated with comments from Trump.