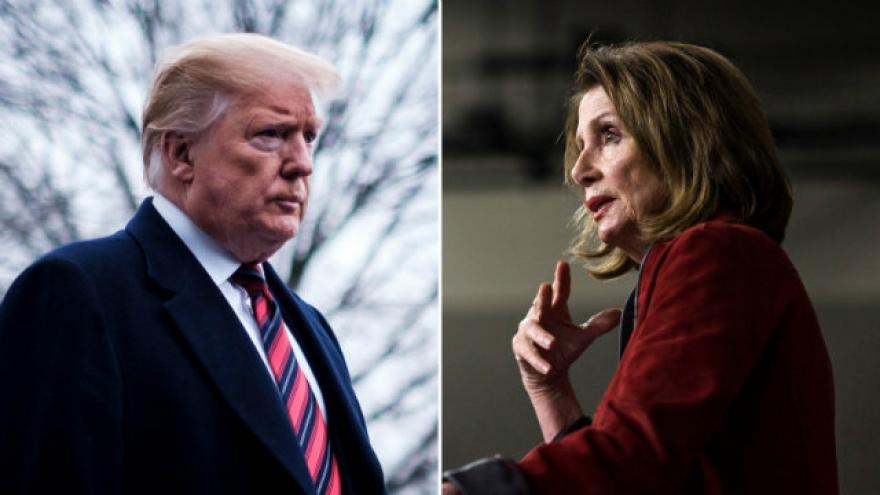 White House officials were caught off guard Wednesday by House Speaker Nancy Pelosi formally disinviting President Donald Trump from giving his State of the Union address from the House chamber, leaving them scrambling for a response. Photo courtesy Getty Images

(CNN) -- President Donald Trump made a concession to House Speaker Nancy Pelosi late Wednesday, agreeing to not give a State of the Union address until after the government shutdown standoff has ended.

"As the Shutdown was going on, Nancy Pelosi asked me to give the State of the Union Address. I agreed. She then changed her mind because of the Shutdown, suggesting a later date. This is her prerogative - I will do the Address when the Shutdown is over," Trump said in a tweet Wednesday.

"I am not looking for an ... alternative venue for the SOTU Address because there is no venue that can compete with the history, tradition and importance of the House Chamber. I look forward to giving a 'great' State of the Union Address in the near future!"

Trump's decision to abide by Pelosi's decision earlier in the day to disinvite him from giving the speech to a joint session of Congress in the House chamber is the first time one of the principal players in the standoff saga has blinked. Trump and Pelosi have been at loggerheads for more than 33 days as the speaker and the President both refuse to budge on shutdown negotiations -- Trump is demanding more than $5 billion for his wall along the southern border and Pelosi is refusing to give him a cent.

Pelosi reacted to Trump's decision by hoping he would back a House-passed bill to reopen the parts of the government shuttered for more than a month.

"Mr. President, I hope by saying 'near future' you mean you will support the House-passed package to #EndTheShutdown that the Senate will vote on tomorrow," Pelosi said on Twitter. "Please accept this proposal so we can re-open government, repay our federal workers and then negotiate our differences."

Earlier in the day, the California Democrat formally disinvited Trump from giving the address from the House chamber, catching White House officials off guard and leaving them scrambling for a response.

White House officials had believed Pelosi wanted only to postpone Trump's State of the Union for political reasons after she sent a letter to him last week asking him to delay the address until after the partial government shutdown ended. The plan from administration officials was to call her bluff by pressing forward with plans to deliver the speech, including a new letter on Wednesday that they hoped would force her hand. In that letter, Trump said he was planning on coming to the House chamber to deliver his address on Tuesday as planned, as he had been assured by Secret Service and Department of Homeland Security officials that there would be no problem providing security for the speech. Pelosi had initially cited security concerns as a reason to delay the speech.

They were left considering possible alternatives before Trump scuttled the idea in his Wednesday night tweet. White House officials were hesitant to hold a campaign-style rally because they thought it wasn't not formal enough to look like the traditional speech. Officials also recognized that it's harder to keep Trump on message during a rally, where he often feeds off the crowd, versus a more formal address. Officials noted that television networks rarely carry the rallies live.

The message Trump planned to deliver at the Capitol -- even one shaped around the shutdown -- would be much more tamped down than the President's usual rhetoric at a rally, where he often deviates from the script and works off the crowd.

It would also include other topic areas, like the economy and foreign policy, that might be hard to include in a speech on the border or in a political venue. And officials believe they have a positive message on both of those areas that they want to break through.

Some officials believed a rally would be seen as just another campaign speech, which they acknowledge people have started to tune out.

The White House floated the idea of holding a rally outside Washington, but not seriously, according to one official.

Officials also looked again at the Oval Office and at other venues in the White House.

The Oval Office was a tough sell for the President, since he disliked the last address he made from there and the polls showed it changed zero minds. They like the East Room/Cross Hall and the Diplomatic Room. The East Room would be easier for hosting Republicans as an audience.

The Senate is set to vote Thursday on two different proposals to end the shutdown, one that was passed by the Democratic-controlled House and one built off Trump's own proposal presented in a speech on Saturday. White House officials expect both bills will fail. But their hope is that once they do, Democrats will be more amenable to negotiations.

It appears that the White House is waiting on those votes before moving forward with negotiations.