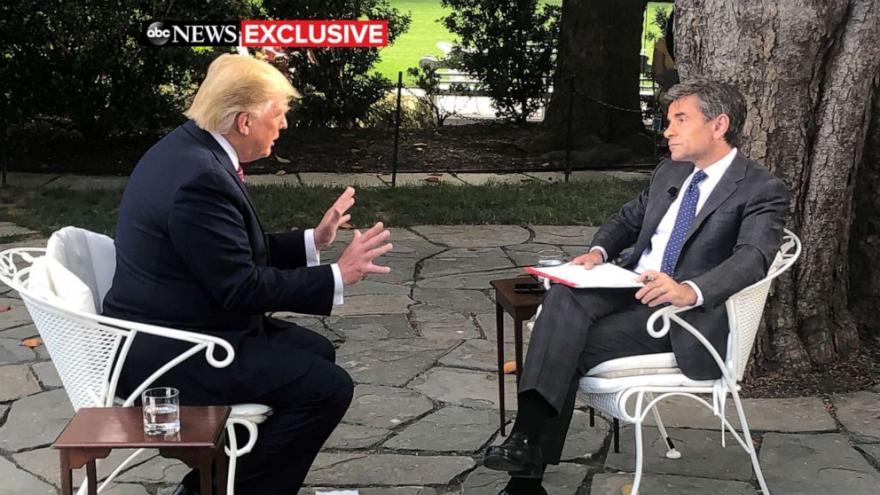 (CNN) -- President Donald Trump says he would listen if a foreign government approached him with damaging information about a political rival -- and wouldn't necessarily report the contact to the FBI.

"I think you might want to listen," Trump said in an interview with ABC News that aired on Wednesday. "There isn't anything wrong with listening."

It was a stark -- if not entirely surprising -- expression of nonchalance from the President over foreign efforts to influence US politics. Trump has consistently downplayed Russian efforts to interfere in the 2016 contest, and cast doubts on US intelligence agencies' assessments of the meddling.

It's a crime for a campaign to knowingly solicit or accept items of value from foreign nationals.

In the interview, though, Trump seemed to suggest rebuffing foreign governments would be unwarranted -- and unnecessary to report to federal law enforcement authorities.

That stance has put him at odds with national security professionals within his own administration. But Trump appeared unbothered by the discord in his interview, saying he would be open to any and all dirt on potential rivals.

"I think I'd want to hear it," Trump said, downplaying the idea such a move by another country would amount to election interference.

"It is shocking to hear the President say outright that he is willing to put himself indebt (sic) to a foreign power... not to mention the foreign interference in an American election part," House Judiciary Chairman Jerry Nadler tweeted Wednesday night.

House Intelligence Chairman Adam Schiff found Trump's comment "stunning on the one hand and not at all surprising on the other," he told CNN's Erin Burnett.

"Donald Trump has made it clear that he will engage in any action, no matter how unethical or unpatriotic, that he will go right up to the line of what's legal and indeed it looks like he crossed that line many times," Schiff added.

Accusing Trump of trying to determine "how he can violate the rules and policies of our country," Lawrence added, "It is past sad. It is past frustration. This is criminal. It is criminal, and we need to hold this President accountable."

Trump and his 2016 campaign have come under intense scrutiny -- and a special counsel investigation -- for their contacts with Russians during the last presidential election.

Special counsel Robert Mueller detailed extensive contact between Trump campaign associates and Russians, but did not conclude there was a criminal conspiracy. The contacts included a now-infamous meeting at Trump Tower between his son, Donald Trump Jr., and a lawyer with close ties to the Kremlin in which potentially damaging information about Hillary Clinton was on the table.

Only a month ago, Trump said he would "certainly agree to" a commitment not to use stolen information from foreign governments to damage a political rival.

"I don't need it," Trump said during a meeting with Hungary's prime minister. "All I need is the opponents that I'm looking at."

But asked Wednesday whether he would take opposition research being peddled by another government, Trump said he likely would.

Earlier Wednesday, Trump erroneously claimed from the Oval Office that his campaign rejected overtures from Russia when offered derogatory information about his opponent in 2016. He asserted falsely that Mueller's report "said we actually rebuffed your friends from Russia; that we actually pushed them back -- we rebuffed them."

Trump on Thursday attempted to equate normal interactions with foreign leaders with the question posed by Stephanopoulos.

"Should I immediately ... call the FBI about these calls and meetings? How ridiculous! I would never be trusted again. With that being said, my full answer is rarely played by the Fake News Media. They purposely leave out the part that matters," Trump added.

During Wednesday's interview, Trump also said he wouldn't automatically report a foreign government's actions to US law enforcement -- something he says he's never considered doing in his lifetime.

"I'll tell you what, I've seen a lot of things over my life. I don't think in my whole life I've ever called the FBI. In my whole life. You don't call the FBI," he said. "You throw somebody out of your office, you do whatever you do."

That's not the view taken by Trump's FBI director, who told lawmakers during his confirmation hearings it would be "wise" for political operatives -- including Trump's son after his meeting at Trump Tower -- to inform his agency about attempts by foreign governments to interfere in US elections.

Trump dismissed those concerns in his interview.

"The FBI director is wrong," he said.