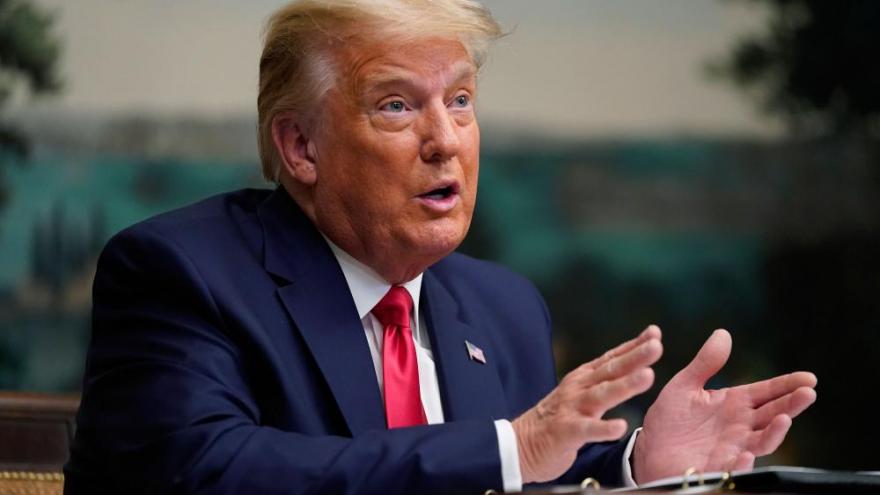 President Donald Trump speaks with reporters after participating in a video teleconference call with members of the military on Thanksgiving, Thursday, Nov. 26, 2020, at the White House in Washington.

(CNN) -- President Donald Trump said Thursday he will travel to Georgia to support the state's Republican Senate candidates ahead of the January 5 runoff election.

"Speaking of Georgia, I'll be going there," the President said after his Thanksgiving video teleconference call with US service members, as he baselessly railed against the integrity of the state's election results.

"Maybe I'll go twice," Trump said at one point, noting that he'd love to do it in a stadium, "But you can't, because of Covid."

Georgia is holding runoff elections for both of its US Senate seats. If either of the incumbent Republicans, Kelly Loeffler and David Perdue, hold onto their seats, the party will maintain its majority control in the chamber.

If Democratic challengers Jon Ossoff and Rev. Raphael Warnock both prevail, however, Democrats would gain control of the Senate thanks to Vice President-elect Kamala Harris' tie-breaking vote.

"Don't be disappointed yet," Trump said, "cause this race is far from over."

The President's comments punctuated a rambling news conference in which he pushed more unfounded voter fraud conspiracy theories and continued to deny his election loss. The spectacle came directly after his call with troops -- an event US Presidents traditionally use to boost morale of service members stationed abroad during the holidays and remind the country of their service.

"Many of you are very far from home, but today, we hope you know that millions of American families are praying with gratitude for the sacrifices you make and the incredible, absolutely incredible, job you do," Trump said as he began the call."

The country, he added, "is doing very well. It's the highest honor of my life to serve as your commander in chief."

Trump spoke with six units representing each US military branch, including the Space Force, which he said holds a "special place in my heart."

"Thank you all, have a great Thanksgiving, and don't eat too much turkey," he said as he concluded the call.

President-elect Joe Biden tweeted that he spent the afternoon on video calls with frontline workers.

"Jill and I were honored today to talk to some of the heroes on the front lines of this crisis," Biden said. "We're thankful today and every day for the nurses and firefighters who sacrifice so much to keep our communities safe. We see the very best of America in your courage and selflessness."

In 2017 and 2018, Trump held his Thanksgiving call with troops from his Mar-a-Lago resort and last year, he made a surprise visit to US troops in Afghanistan.

"There is nowhere I'd rather celebrate this Thanksgiving than right here," Trump said at the time, "with the toughest, strongest, best and bravest warriors on the face of the earth."