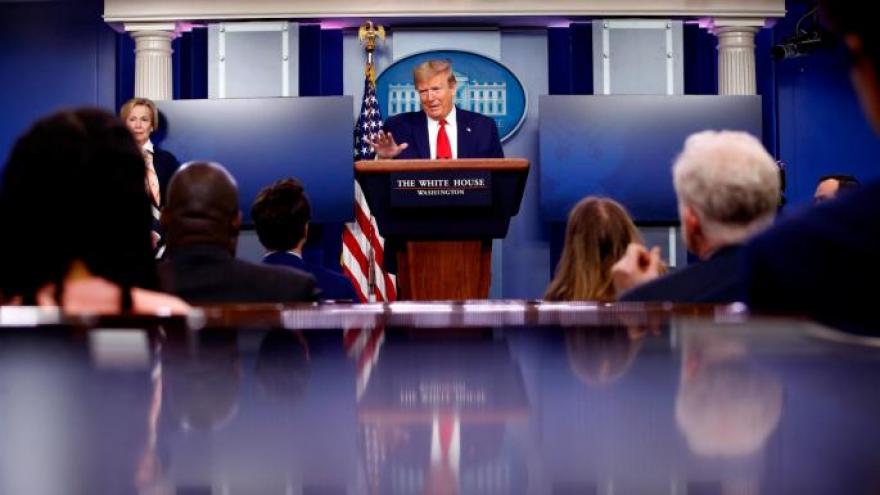 Spelling out details of the measure for the first time since tweeting late Monday he would "temporarily suspend immigration into the United States," Trump announced something short of a full halt on immigration amid the coronavirus pandemic.

Instead, he said the provision would amount to a 60-day pause only on people seeking permanent resident status in the United States. An administration official with knowledge of the process told CNN the order only addresses green cards because the temporary work visa portion is more complicated and needs more time to sort out, particularly given the fact that many of those currently in the US on work visas are working in industries related to the pandemic, from workers at food processing plants to health care workers.

Trump said on Twitter Wednesday he would sign the order later in the day. An administration official told CNN that legal aides spent Tuesday working on the order. Trump said he would review the executive order at the end of that 60-day period and decide if it should be renewed.

Trump suggested there will be economic effects of the order, indicating it would "protect American workers," and noted that it will have certain exemptions.

"By pausing immigration, we'll help put unemployed Americans first in line for jobs as America reopens," Trump said. "It would be wrong and unjust for Americans laid off by the virus to be replaced with new immigrant labor flown in from abroad. We must first take care of the American workers."

Details on exemptions, he later said, might come "tonight or tomorrow."

Ahead of Trump's briefing on Tuesday, details of the plan were murky and some White House aides said there wasn't a great deal of clarity on how the order would come together. A person familiar with the matter said administration officials began working around the middle of last week on an executive order that would restrict immigration after Trump raised the matter privately with aides.

Even before Trump provided more specific details about his move, his reelection campaign and allies were already touting and defending the executive order, reflecting the political underpinnings of Trump's late-night announcement on Monday.

The move -- which could prove largely symbolic, given the restrictions on immigration already in place due to the coronavirus pandemic -- allows Trump and his campaign to play directly to his base on the issue of immigration, which the President believes won him the 2016 election and he hopes to use again in 2020.

But it also stands to affect tens of thousands of people waiting to immigrate to the US, some of whom may be family members of US citizens. Approximately 459,000 foreign national new arrivals to the US became green card holders in 2019, down 13% from 2018 arrivals, according to statistics from the Department of Homeland Security.

There was "a lot of hype, but no real change to the current practice in place," said a US official, who added that most work visas and green card applications have been on hold due to coronavirus restrictions.

Over the course of recent weeks, the Trump administration has made more than a dozen changes to the US immigration system, citing the coronavirus pandemic -- largely cutting off immigration to the country. Refugee resettlement has been put on hold, visa offices are largely closed, citizenship ceremonies aren't happening, and the administration is swiftly removing migrants, including children arrested at the border, among a slew of other changes.

Administration officials began working on an executive order to further restrict immigration last week, according to a person familiar with the matter. But some of its provisions were still being fleshed out when Trump tweeted about it late Monday with little warning to officials who had been working to craft the order.

Facing criticism over his administration's response to the coronavirus, Trump had been impatient to announce the order, a person familiar with the matter said.

Trump's principal adviser on immigration, Stephen Miller, was involved in the discussions over the past several days, according to people familiar with the matter. Miller has long acted as a main internal advocate for limits on immigration through executive action.

Another official said National Security Council officials held a policy coordination committee on Tuesday about the issue, and the group plans to meet again on Friday to discuss implementing it. That meeting was led by the Border and Transportation Security Directorate (BATS), the official said. The entire order appeared to be still in flux Tuesday night, but the source said ultimately the order won't be as expansive as the President first indicated in his Monday tweet.

Immigration hardliners, who have urged the administration to reduce the flow of immigration to the US, heralded Trump's decision.

"With tens of millions of Americans who want to work full-time unable to do so, most immigration at this moment makes no sense, and the President appears to be moving in the right direction to curtail it," said Roy Beck, founder and president of Numbers USA, which advocates for reduced immigration.

Immigrants are on the frontlines of the coronavirus pandemic, making up a significant part of the workforce in many jobs that are key to fighting the virus and keeping the country afloat, according to a recent analysis by the Migration Policy Institute.

The administration has acknowledged the need for workers in some industries. Last week, the administration said it was temporarily amending visa requirements for foreign workers. The change is designed to help US agricultural employers who rely on foreign workers. Qualified employers who are concerned workers will be unable to enter the US due to travel restrictions can employ those already in the US with a certain visa status.

Among the reasons listed by the Department of Homeland Security and Department of Agriculture for the temporary rule change is protecting the nation's food supply chain.