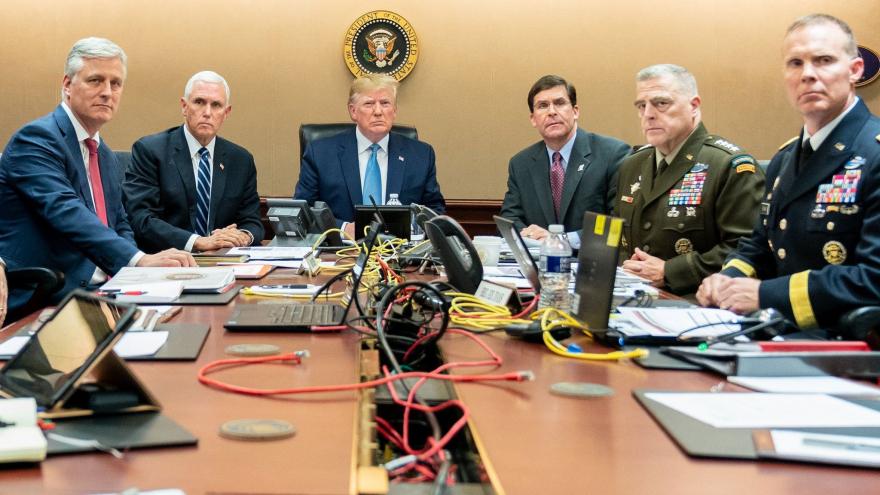 "Just confirmed that Abu Bakr al-Baghdadi's number one replacement has been terminated by American troops. Most likely would have taken the top spot - Now he is also Dead!" Trump tweeted.

A US official told CNN that "the President was referring to ISIS spokesperson Abu Hasan al-Muhajir."

The official described al-Muhajir as both a spokesperson and "kind of a number two" to Baghdadi.

Mazloum Abdi, the general commander of Syrian Democratic Forces (SDF), also said Monday that al-Muhajir was killed in a coordinated operation between the US military and SDF intelligence officers near Jarablus in northern Syria.

The White House and the national security council did not say whether it is accurate that "American troops" were responsible for the death. The Pentagon said it had nothing to provide beyond the President's tweet.

What remains of ISIS -- the so-called Islamic State in Iraq and Syria -- is yet to acknowledge the death of Baghdadi who was killed in a raid by US forces in northern Syria on Saturday.

At this early stage it's not clear who will succeed him, especially now with the death of al-Muhajir, but a long-time Baghdadi companion and religious scholar would seem to be a leading candidate.

He is known within jihadi circles as Abdallah Qardash, but the US government identifies him as Amir Muhammad Sa'id Abdal-Rahman al-Mawla and is thought to have known Baghdadi for at least 15 years. They were both detained at a US-run prison known as Camp Bucca soon after the coalition's invasion of Iraq in 2003, though it's unclear if that's where they first met.

In August, it was widely reported that the ISIS-affiliated Amaq news agency had announced al-Mawla as Baghdadi's anointed successor. But the announcement came from a fabricated account and it would certainly not have been ISIS' modus operandi to issue such a statement.

Later that month, the US added al-Mawla to its Rewards for Justice list, offering up to $5 million for information leading to his capture and saying that "as one of ISIS's most senior ideologues ... he is a potential successor to ISIS leader Abu Bakr al-Baghdadi."