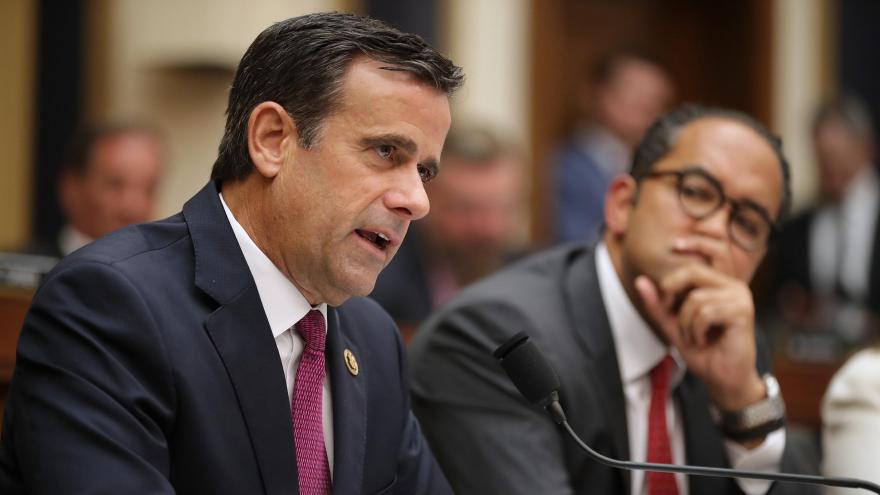 Ratcliffe was announced as Trump's choice for the job less than a week ago but it became more apparent with each passing day that his nomination was in serious trouble even as the President continued to defend him publicly.

Even after the fact, Trump blamed the press for Ratcliffe's downfall even though he nominated a lawmaker with minimal national security experience to one of the most sensitive jobs in government.

"Our great Republican Congressman John Ratcliffe is being treated very unfairly by the LameStream Media," Trump wrote on Twitter. "Rather than going through months of slander and libel, I explained to John how miserable it would be for him and his family to deal with these people. John has therefore decided to stay in Congress where he has done such an outstanding job representing the people of Texas, and our Country. I will be announcing my nomination for DNI shortly."

Trump has privately voiced concern in recent days about Ratcliffe's ability to be confirmed as the next director of national intelligence, according to two people who spoke with him. The President had been assured by allies before selecting Ratcliffe that he would be an easy pick and was surprised when Ratcliffe started facing issues from senators who had their own concerns.

A Republican Senate source told CNN that they did "not know anyone who was enthusiastic about his appointment with the exception of a couple of friends whom he served with in the House."

"The intelligence community was truly up in arms and very worried," and a couple even broke traditional protocol to call and express that concern, the source said.

Shortly after Trump's announcement, Ratcliffe tweeted that he was withdrawing from consideration.

"While I am and will remain very grateful to the President for his intention to nominate me as Director of National Intelligence, I am withdrawing from consideration. I was humbled and honored that the President put his trust in me to lead our nation's intelligence operations and remain convinced that when confirmed, I would have done so with the objectivity, fairness and integrity that our intelligence agencies need and deserve," the post read.

"However, I do not wish for a national security and intelligence debate surrounding my confirmation, however untrue, to become a purely political and partisan issue. The country we all love deserves that it be treated as an American issue. Accordingly, I have asked the President to nominate someone other than me for this position," Ratcliffe added.

Republican Sen. Richard Burr, the chairman of the Senate Intelligence Committee, said Friday that he respected Ratcliffe's decision and is grateful that he will continue serving in the House.

"As the White House determines its next nominee, I'm heartened by the fact that ODNI has an experienced and capable leadership team to help see it through this transition. However, there is no substitute for having a Senate-confirmed director in place to lead our Intelligence Community," he said in a statement.

A source familiar with Trump's selection of Ratcliffe said his pick for DNI was not properly vetted prior to the announcement.

"Some kind of vetting" had occurred when Ratcliffe was previously considered for Attorney General, "but not enough," the source said, noting that it was his performance during the Mueller hearing that was a driving force behind his selection.

This source compared Ratcliffe's nomination process to that of Dr. Ronny Jackson, who was picked to be the Veterans Affairs Secretary in large part due to his performance on television at a press briefing where the physician praised Trump's health.

Jackson ultimately withdrew from consideration after his nomination was hampered by a flurry of personal conduct-related allegations.

But this source said the haphazard handling of Ratcliffe's vetting was more serious this time around.

"DNI is briefing the president. Everybody has to have confidence" in the director, they added.

Trump denied that there was any issue with the White House vetting process Friday.

Yet administration officials are expressing concern that the vetting process in the White House isn't up to the standard it should be in the wake of yet another nominee being withdrawn.

One senior official says the White House has known for weeks that Coats would be replaced soon and there's no excuse for this, adding "traps should be run" to figure out who told the President nominating Ratcliffe would be a good idea and that he would be confirmable.

Republican Senators raised concern to the White House about Ratcliffe ahead of Trump's announcement he would no longer be nominated, according to two White House officials and sources familiar with the process.

Senators "have made their views known" about Ratcliffe, one White House official told CNN.

"The nomination was greeted with a distinct lack of enthusiasm. The Senators don't know Congressman Ratcliffe, and none of them seemed eager to champion his nomination. The only positive from the administration's standpoint was that the nomination got lost in the combination of the usual pre-August recess scramble and the Democratic presidential debates," a Senate GOP aide said.

A source familiar with the situation also told CNN that some senior administration officials had reservations about whether Ratcliffe was the right person for the job and were raising questions about whether he could be confirmed.

Before his nomination was pulled, two White House officials downplayed questions about Ratcliffe's qualifications, saying the thinking among some inside the White House was that Ratcliffe's lack of national security experience was not as much of an issue.

The more important thing in the President's view, according to the officials, was to have someone who melds with Trump personality-wise and can be a 'credible interlocutor' with the administration, Congress and other countries -- which the President believed Ratcliffe fit the bill for, at least before he withdrew.

Democrats had also vowed to stop Ratcliffe from being confirmed, raising concerns about both his lack of experience and partisanship.

Following news of Ratcliffe's withdrawal, Sen. Mark Warner, a Democrat and vice chairman of the Senate Intelligence Committee, urged Trump on Friday to nominate someone "in the mold of Dan Coats."

"The President should take this opportunity to nominate a DNI in the mold of Dan Coats: someone with a deep knowledge of the intelligence community, respect for the hard work intelligence professionals do to keep us safe, and the independence and integrity to speak truth to power when necessary," he said in a statement to CNN.

There's an active search right now for candidates to assume the acting role and it's unlikely that Deputy Director Sue Gordon will be picked, a senior administration official and a source familiar with the issue added.

Should Trump skip over Gordon, it could further the criticism that he is politicizing the intelligence community at the expense of long-serving career professionals.

The administration is reviewing whether it can legally choose an acting director outside the line of succession, one of the sources said. However, the sources caution no final decision has been made.

Ultimately Trump has discretion. CNN legal analyst and law professor Stephen Vladeck says there are two competing theories about the relevant statutes. Under one theory, the President has no discretion as long as a there is a confirmed principal deputy. Under a broader statute, Trump has a wider pool of potential acting directors.

Two sources have told CNN that Gordon is viewed by some in the administration as someone who is not going to be the type of political loyalist Trump wants in that role.

Gordon is a career official, though Trump does like her, one of those sources said.

However, Trump told reporters on Friday that Sue Gordon "could be" considered as acting DNI and said he likes her.

"Sue Gordon is there now and I like her very much. I've always liked Sue Gordon."

"She will certainly be considered for the acting and that could happen," Trump said adding that he would be talking about it this weekend.

Trump's ambassador to the Netherlands, Pete Hoekstra, is one of the people who is being looked at for the acting role -- in part because he is already Senate confirmed. He is not considered the frontrunner right now, according to White House officials.

Multiple sources have told CNN that Hoekstra was discussed as a possible candidate for the full time DNI role but he was never given an opportunity to interview for the job before Trump selected Ratcliffe.

Unlike Ratcliffe, who came under fire by Senate Democrats over reports that he embellished his credentials, one Congressional source told CNN that there is no question about Hoekstra's experience in this area.