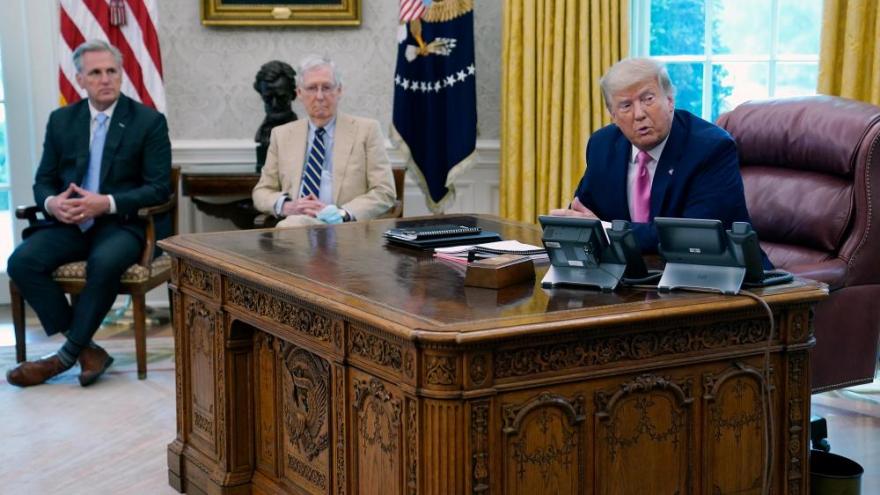 "We have had this big flare up in Florida, Texas, a couple of other places," Trump said from the Oval Office. "I'll get involved and we'll start doing briefings."

The acknowledgment came as Trump's advisers debate a return to the daily briefings, which were a hallmark of the pandemic's earlier days. They ceased after Trump repeatedly found himself sparring with reporters and going on tangents, including one about ingesting disinfectant.

Now, however, many of Trump's aides worry he appears absent as the crisis continues to rage. Trump no longer attends daily coronavirus task force meetings and hasn't held an event specifically focused on the virus in two weeks.

Trump said the revival of briefings would allow him to tout advancements on therapeutics and vaccines, and explain the "positive things" his administration is doing to combat the virus.

"I think it's a great way to get information out to the public," Trump said, adding they would likely resume on Tuesday at 5 p.m. ET -- the same time he typically briefed in the spring.

"We had a good slot. A lot of people were watching," Trump said, using television ratings lingo to describe the sessions: "We had record numbers watching," he said. "In the history of cable television there's never been anything like it."

As polls show Americans souring on Trump's handling of the public health crisis, his aides had begun weighing plans to put him back in front of the administration's response, including the potential of resuming the type of near-daily update that marked the first stage of the outbreak, people familiar with the plans say.

Recognizing that Trump's reelection prospects are now tied intractably to the coronavirus pandemic, his aides are hopeful the coming weeks will mark a new focus on his part on addressing the crisis and appearing in charge.

A senior Trump campaign adviser said not only would that help Trump politically, it would have the added benefit of saving lives.

"It's about doing the right thing," the adviser said.

Few believe Trump is interested in resuming the day-to-day oversight of the pandemic, which he has largely left to Vice President Mike Pence since April.

The potential pitfalls seem numerous, including the type of disastrous episode that ended his briefings the first go-around. Many are skeptical that Trump can remain on-message long enough to convince Americans that he is taking the pandemic seriously.

And Trump himself had been wary of returning to the podium as the face of the administration response, concerned it will send the signal the virus isn't under control and that his efforts so far have been fruitless.

But with the virus spreading out ofcontrol in many parts of the country and his standing among voters worsening, Trump's advisers feel they have little choice but to try something new.

So a change in strategy appears in the offing, at least in theory.

"The President's routinely focused on the coronavirus," White House press secretary Kayleigh McEnany said on Thursday. "I think you'll be hearing more about what we're doing in the coming week. He's hard at work."