Trump says Shanahan out of confirmation process to be defense secretary 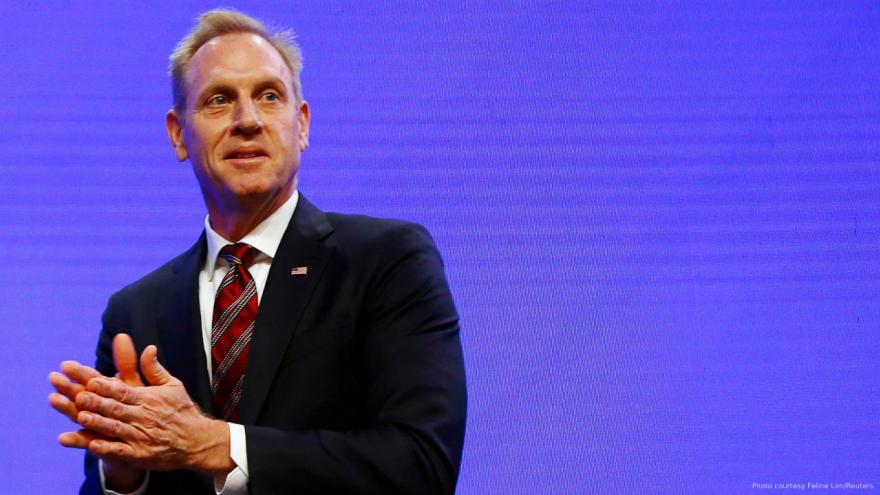 (CNN) -- President Donald Trump said Tuesday that acting Defense Secretary Patrick Shanahan has "decided not to go forward with his confirmation process." His resignation comes amid reports detailing his contentious divorce, which dragged out over six years.

"Acting Secretary of Defense Patrick Shanahan, who has done a wonderful job, has decided not to go forward with his confirmation process so that he can devote more time to his family," Trump tweeted.

"I thank Pat for his outstanding service and will be naming Secretary of the Army, Mark Esper, to be the new Acting Secretary of Defense. I know Mark, and have no doubt he will do a fantastic job!" he added.

Later Tuesday, Shanahan released a statement saying he withdrew from consideration after details surfaced related to "a painful and deeply personal family situation from long ago."

"After having been confirmed for Deputy Secretary less than two years ago, it is unfortunate that a painful and deeply personal family situation from long ago is being dredged up and painted in an incomplete and therefore misleading way in the course of this process," he said.

"I believe my continuing in the confirmation process would force my three children to relive a traumatic chapter in our family's life and reopen wounds we have worked years to heal. Ultimately, their safety and well-being is my highest priority," Shanahan added.

In court filings, Shanahan's ex-wife Kimberley accused him of hitting her during a dispute at their home in August 2010.

A police officer who responded to the dispute noted that "Patrick had a black eye and a bloody nose" and that Kimberley did not have "any visible marks" on her, though Kimberley told the officer Patrick struck her several times in the stomach, according to a police incident report.

His ex-wife, who later changed her name to Kimberly Jordinson, was arrested and charged with assault for the incident. The charges against her were later dropped.

In an unrelated incident, Jordinson was also arrested in Florida in 2014, for smashing a car's front and back windshields with a sledgehammer according to a police report, but she was not convicted.

When CNN spoke to Jordinson in January, she said she stood by her allegations. She also said she had not spoken to Shanahan since the 2010 incident, and that the two only communicated through attorneys.

Shanahan addressed the issue in a statement earlier this week.

"Though my marriage ended in sorrow and disappointment, I never laid a hand on my then-wife and cooperated fully in a thorough law enforcement investigation that resulted in her being charged with assault against me—charges which I had dropped in the interest of my family," he said.

Patrick and Kimberley's daughter Kayla Shanahan released her own statement saying: "I never once saw my father raise a hand against my mother or against his children. To the contrary, my mother has a history of domestic abuse and physical violence, victimizing my father and her children, as well as having been subject of a restraining order unrelated to our family."

Their son, Will Shanahan defended his father as a "source of stability."

"I and my brother and sister were subject to emotional and physical abuse by our mother. My father was and is the source of stability in our lives, in contrast to the constant physical and emotional trauma inflicted on us by our mother," he said in a statement.

A US defense official told CNN that Esper received a call from the White House about 30 minutes before the President's tweet.

The service secretaries, including Esper, will meet later Tuesday afternoon with Shanahan to discuss transition, the official said.

Trump announced his intention to nominate Shanahan on May 9, but the paperwork necessary to begin confirmation hearings hadn't been filed.

Shanahan appeared to downplay concerns about his candidacy last week.

"I can't tell you how long the process is supposed to work," Shanahan responded when asked why it is taking so long for his paperwork to be sent from the White House.

When asked last week if he had assurances from Trump that he was still the President's pick to lead the Defense Department, Shanahan said he is "in contact with the White House" and expects the process to be completed shortly.

"I'm in contact with the White House. We're done with our paperwork, expect to have the process completed here shortly," he said.

While Esper will replace Shanahan as acting defense secretary, Trump did not specify whether he will also become the new nominee to take on the role full-time.

Esper's name had previously been floated before Trump nominated Shanahan and his allies have been pushing for the President to nominate him over the acting secretary for weeks.

Asked about Esper's interest in the secretary of defense role, his spokesman pointed to a December statement in which the Army secretary told the Ft. Worth Star-Telegram: "I'm very happy and privileged to be secretary of the Army."

A senior GOP aide on the Senate Armed Services Committee told CNN Tuesday that naming Esper to replace Shanahan was "a good move by the administration" and said he would be "a very smart pick" should the White House choose to nominate him.

"He would have a very smooth confirmation," the aide said, adding that Esper is "the most qualified in the Department."

The aide also told CNN that most committee staff are relieved about Trump's announcement.

"We don't have to go through that confirmation battle," they said, referring to Shanahan.