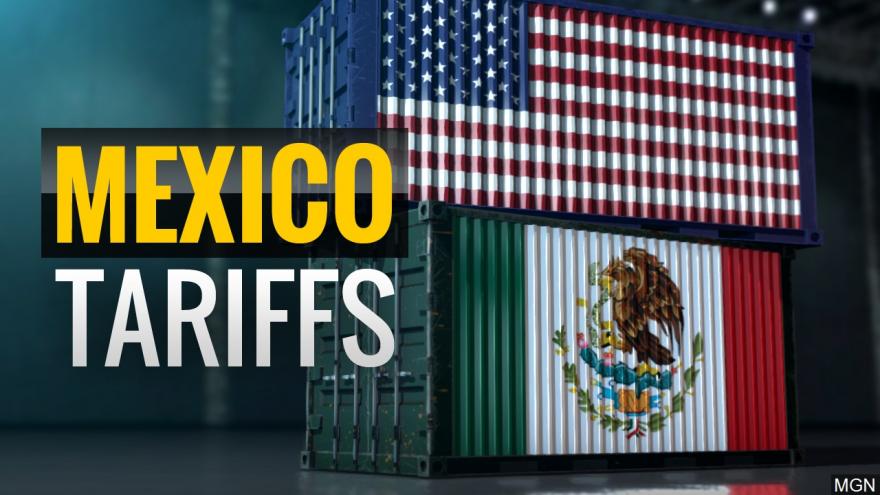 (CNN) -- President Donald Trump said tariffs on Mexican goods are "indefinitely suspended" after negotiators from the US and Mexico were able to reach a deal on immigration enforcement.

"I am pleased to inform you that The United States of America has reached a signed agreement with Mexico," Trump tweeted Friday. "The Tariffs scheduled to be implemented by the U.S. on Monday, against Mexico, are hereby indefinitely suspended."

Trump had threatened to impose tariffs on Mexican goods entering the US if Mexico did not limit the number of migrants moving through the country to the US. He said late Friday, after he had returned to the White House from his visit to Europe for D-Day commemorations, that the Mexican officials had agreed to his demands.

"Mexico, in turn, has agreed to take strong measures to stem the tide of Migration through Mexico, and to our Southern Border," Trump tweeted. "This is being done to greatly reduce, or eliminate, Illegal Immigration coming from Mexico and into the United States. Details of the agreement will be released shortly by the State Department. Thank you!"

Administration officials had said earlier Friday that they were prepared to move forward with the threatened tariffs on Mexico, even as negotiations continued in Washington over addressing the immigration issues at the heart of the standoff.

The Trump administration was expected to submit legal notification on Friday of its intention to implement tariffs Monday on Mexico, Vice President Mike Pence's chief of staff Marc Short said. But Short said Trump could "turn that off" over the weekend if negotiations "continue to go well," which appeared to be the route Trump chose Friday.

"There's a legal notification that goes forward today with a plan to implement tariffs on Monday, but I think there is the ability -- if negotiations continue to go well -- that the President can turn that off at some point over the weekend," Short had told reporters at the White House on Friday morning.

Trump faced a Friday deadline to sign an executive order to ensure the tariffs go into effect by Monday, his deadline for Mexico to meet his immigration demands or face a 5% tariff on all exports to the US. And before he signed a potential the executive order, US Customs and Border Protection would have had to submit a notice to the Federal Register to begin the process.

Trump on Thursday had said "a lot of progress was made" earlier this week in talks with Mexican officials, but repeatedly stood by his vow to impose the tariffs, despite criticism from some Republicans, who have urged him to delay the implementation.

The US-Mexico deal, details of which were not yet available,comes amid a surge in migrants crossing into the US, straining the resources of federal immigration and border authorities. More than 144,000 migrants were encountered or arrested at the US-Mexico border in May, US Customs and Border Protection said this week, a roughly 32% increase from the previous month and the highest monthly total in more than a decade.

Of those, nearly 133,000 crossed the US-Mexico border illegally, including more than 11,000 unaccompanied children.

Mexico has already pledged to send about 6,000 National Guard troops to its southern border with Guatemala in a bid to cut off the flow of Central American migrants whose journey to the US's southern border has led to a steep spike in border crossings in recent months.

But US officials demanded more.

US officials pressed Mexico to change its asylum policy by entering into a "safe third country" agreement with the US. Mexico has rejected those offers in the past, but US officials have said that Mexico was more open to some version of this idea in talks on Thursday. The goal would be to require Central American migrants to face asylum proceedings in Mexico or the first country they cross through, rather than in the US.

Mexican officials, meanwhile, urged the US to address the root causes of Central American migration by investing in programs that would reduce poverty violence in those countries. Trump, though, moved earlier this year to cut US foreign aid to those countries, a move even US officials say is counterproductive.

Amid the negotiations, some Republican lawmakers continued to express concern about the impact of tariffs on all goods that cross into the US from Mexico, a move that could ultimately lead to higher prices for US consumers and hurt US businesses as well as the Mexican economy.

Short hit back at the uneasy Republican lawmakers on Friday.

Short said specifically that the administration wants Congress to change US asylum laws that "allow families to basically come across the border and be protected and let go into our United States until the adjudication process completes."