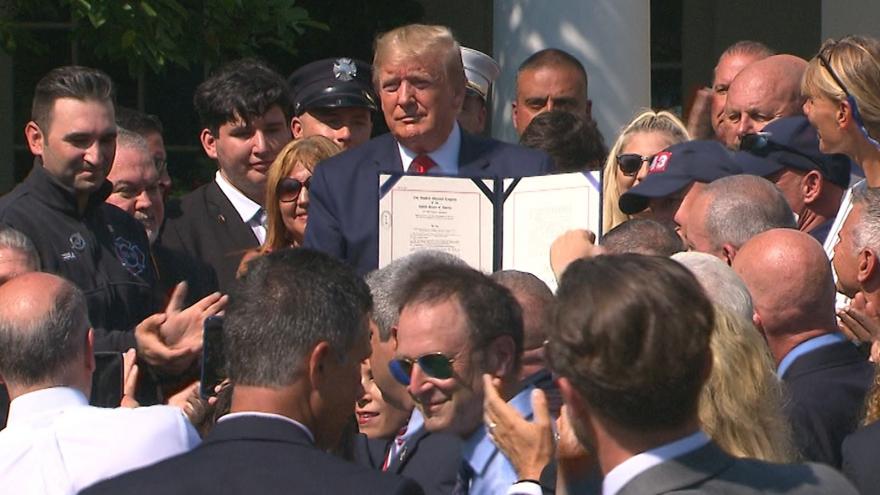 President Donald Trump signed an act into law which authorizes the extension of the 9/11 Victim Compensation Fund. Source: CNN
By Maegan Vazquez, CNN

(CNN) -- President Donald Trump on Monday signed an act into law which authorizes the extension of the 9/11 Victim Compensation Fund.

"Today we come together as one nation to support our September 11th heroes to care for their families and to renew our eternal vow -- never ever forget," Trump said during a White House Rose Garden ceremony, calling the fund's extension part of "a sacred duty."

The President was joined by more than 200 individuals affected by the 9/11 terrorist attacks, including more than 60 first responders.

"The love and loyalty of our 9/11 responders knew no bounds," Trump said. "They answered terror with the emotional strength of true American warriors."

Former New York City Mayor Rudy Giuliani, who has served as Trump's personal attorney, was among the lawmakers in the audience. The family of the late Luis Alvarez, a retired NYPD bomb squad detective who testified before Congress to advocate for the extension of the fund, was also in attendance. The President thanked Alvarez's family for his hard work.

Trump told the crowd of 9/11 first responders and their families that he was also at Ground Zero in the wake of the terror attacks, though he said he doesn't consider himself a first responder.

The comments were reminiscent of previous claims Trump has made about 9/11, including when he claimed during the 2016 election to have "helped a little bit" to clear the rubble. Trump did not reiterate that claim on Monday.

Trump was near Ground Zero in the days after the 9/11 attacks, where he conducted at least two TV interviews, discussing the attacks and claiming that he had "hundreds of men" working to clear the rubble at Ground Zero -- a claim that 9/11 responders have called dubious.

The extension of the fund will ensure compensation for individuals injured during the 2001 terrorist attacks and their aftermath rescuing people and removing debris under hazardous conditions.

In the face of dwindling resources and a surge in claims, the fund's administrator announced in February that it would need to significantly reduce its awards. The fund was slated to expire in 2020. But the newly signed legislation, championed by comedian Jon Stewart, ensures the compensation for victims through 2090.

Stewart and 9/11 first responders testified to a near-empty House Judiciary Committee about the bill, catching the attention of many.

"As I sit here today, I can't help but think, what an incredible metaphor this room is for the entire process that getting health care and benefits for 9/11 first responders has come to," Stewart said at the time.

In the following days, the bill passed in the House of Representatives on a voice vote without opposition.

The Congressional Budget Office estimates the fund's extension will cost about $10 billion over the next decade.

Republican Sens. Rand Paul of Kentucky and Sen. Mike Lee of Utah were the only senators to vote against the bill.