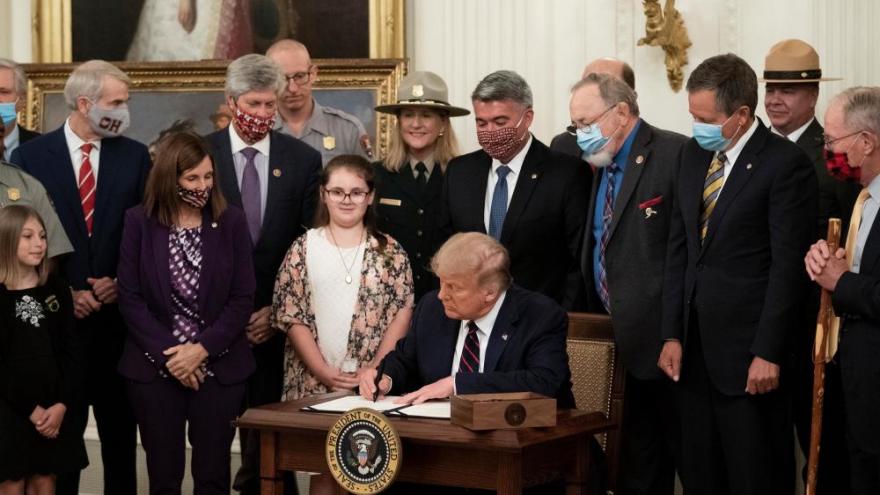 (CNN) -- President Donald Trump signed a measure Tuesday that will fully fund the Land and Water Conservation Fund -- a program his administration's budget proposals had repeatedly tried to cut.

The legislation signing marks an important political win for Republican Sens. Cory Gardner of Colorado and Steve Daines of Montana, who both hail from conservation-minded states and face tough reelection races this November.

The Great American Outdoors Act passed with bipartisan support, but no Democrats were invited to the event. Instead, Trump largely credited Daines and Gardner for its passage.

Trump called the bill a "very big deal from an environmental standpoint" and compared himself to the "legendary conservationist" President Theodore Roosevelt, who, among other environmental efforts, established 230 million acres of public lands during his time in office.

He also called the bill signing "the most significant contribution to our parks" since Roosevelt.

"We are proving that we can protect our treasured environment without bludgeoning our workers and crushing our businesses," Trump said, before attacking China, Russia and India, countries that he said "pollute with impunity."

The President also conceded that the modern Republican Party isn't necessarily associated with conservation but said the party has been "unbelievably active" on that front.

But while ticking off his perceived environmental accomplishments since taking office, the President mentioned Bears Ears National Monument in Utah -- a segment of public land his administration shrunk by more than 80%.

The Center for American Progress, a left-leaning think tank, estimated earlier this year that "the Trump administration has attempted to remove protections from nearly 35 million acres of public lands -- approximately 1,000 times more land than his administration has protected."

Trump has frequently vowed to "ensure" that the United States has the "cleanest air" and the "cleanest water," but his administration has also repeatedly attempted to roll back environmental regulations.

Most recently, in July, Trump announced regulatory changes to the National Environmental Policy Act to speed up approval of federal projects such as mines, highways, water infrastructure, and gas pipelines, which effectively weakened what's considered to be a landmark conservation law.