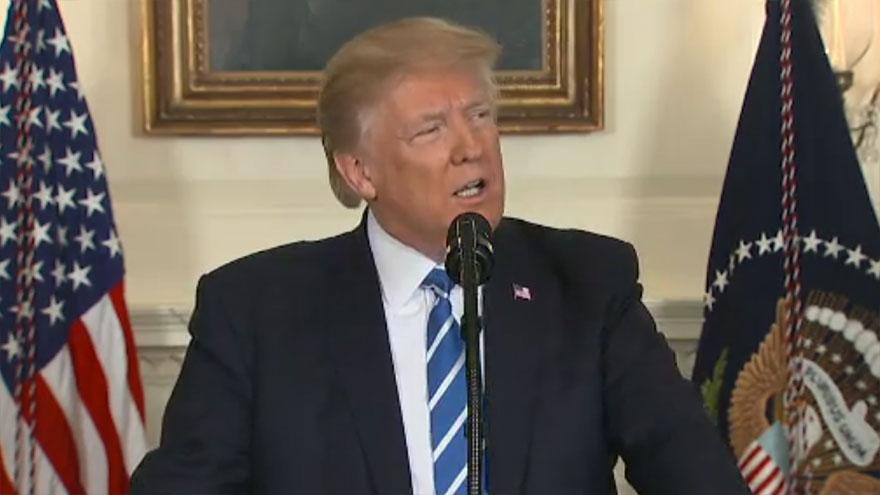 (CNN) -- President Donald Trump, fresh off a five-country swing through Asia, sought Wednesday to cast his first 10 months on the world stage as an unmitigated success, claiming a "great American comeback" that has restored the US' standing in the world.

The speech, which came as Trump fumed at press coverage of his trip, framed his accomplishments in terms of correcting the "mistakes" of his predecessors and following through on his promises to voters. But he offered no new announcements on trade or North Korea, two of the top issues he focused on during his trip.

"I vowed that we would reaffirm old alliances and form new friendships in pursuit of shared goals. Above all I swore that in every decision, every action I would put the best interest of the American people first. Over the past 10 months traveling the globe and meeting with world leaders, that is exactly what I have done," Trump said from the Diplomatic Reception Room of the White House.

Trump pointed to his efforts during his first foreign trip to rally Muslim leaders around the fight against radical Islamist terrorism and his urging that NATO allies boost their financial commitments to the alliance. And he highlighted his efforts on this most recent trip to bring back "free and reciprocal trade" and unite the world against the North Korean threat.

"My fellow citizens, America is back, and the future has never looked brighter," he concluded.

But much of his speech failed to counter the core of the criticism he has faced in the wake of his 12-day trip to Asia: that he didn't deliver on his rhetoric.

Beyond fresh Japanese sanctions against North Korea and a verbal commitment from China to increase pressure on North Korea, Trump made no immediate, visible progress to stop North Korea's development of nuclear weapons and ballistic missiles.

Trump on Wednesday touted his insistence to regional partners on "free and reciprocal" trade, but he emerged with no written commitments from the region to rebalance trade with the US or change trade practices that have disadvantaged the US.

The President did appear to try to clean up remarks in Beijing when he said he did not "blame" China for its unfair trade practices and gave the country "credit" for taking advantage of the US.

Trump said Wednesday that he emphasized to Chinese President Xi Jinping in "a very candid conversation" that US-Chinese trade must be "conducted on a truly fair and equitable basis."

"The days of the United States being taken advantage of are over," Trump promised, though he announced no changes to the terms of the relationship.

Trump returned Tuesday night from his tour of Japan, South Korea, China, Vietnam and the Philippines, where he focused on trade and North Korea's ongoing development of nuclear weapons and ballistic missiles.

Trump was able to help secure the release of three UCLA basketball players, appealing directly to Xi to look into the matter.

But Trump on Wednesday morning was focused on the criticism he has faced from some over his warm embrace of Xi, whom Trump praised in Beijing and absolved of any wrongdoing for unfair trading practices that Trump has said have hurt the US.

"The failing @nytimes hates the fact that I have developed a great relationship with World leaders like Xi Jinping, President of China," Trump tweeted. "They should realize that these relationships are a good thing, not a bad thing. The U.S. is being respected again. Watch Trade!"