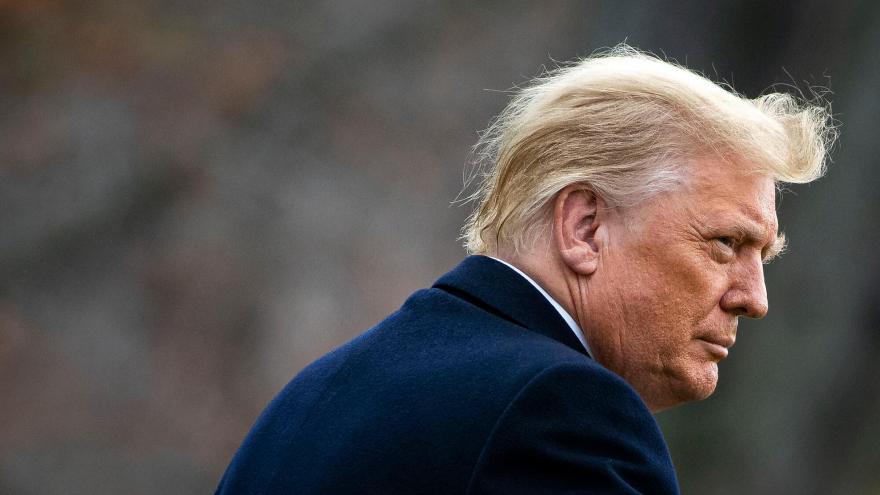 President Donald Trump departs on the South Lawn of the White House, on December 12, 2020 in Washington, DC. Trump is traveling to the Army versus Navy Football Game at the United States Military Academy in West Point, NY.

(CNN) -- President Donald Trump's vow to veto the bipartisan National Defense Authorization Act places Capitol Hill in a bind and could lead to Congress having to return to session between Christmas and New Year's -- or even a veto override vote happening next year before the new Congress is sworn in.

Senate leaders are discussing holding an override vote of Trump's possible veto of the annual defense bill on the morning of Sunday, January 3, before the outgoing 116th Congress expires and the incoming 117th Congress is sworn in at noon that day.

The timing, which is not finalized, would allow senators to avoid being brought back to Washington over the Christmas and New Year's Day holidays to deal with the override, according to GOP aides. But it would also require careful planning to overcome any possible procedural delays by opponents of the bill that could disrupt it.

"That would be my preference," Senate Armed Services Chairman James Inhofe, a Republican from Oklahoma, told CNN about voting once senators have returned from their year-end recess.

Republicans are still trying to convince Trump not to veto the poplar National Defense Authorization Act, which has become law for the last 59 consecutive years. He opposes a provision requiring renaming of military bases named for Confederate leaders and wants a provision added to reform liability laws for social media companies like Twitter. Trump has until December 23 to veto the defense bill as he has threatened or to allow the measure to become law.

White House Press Secretary Kayleigh McEnany said Tuesday that Trump plans to veto the NDAA over objections beyond the absence of a Section 230 repeal, the social media liability law, though she didn't say when.

"He does still plan to veto the NDAA. I don't have a timeline for you on that. But he does plan to veto it," McEnany said during a White House press briefing.

House leaders have not settled on a plan for when they would override the veto but may do it before January 3 and therefore require members to return over the holidays, according to a Democratic aide.

Both the House and the Senate passed the annual defense authorization bill last week with wide bipartisan majorities, plenty to override a presidential veto.

Trump's threat to veto the bill has drawn swift and sharp bipartisan pushback from lawmakers who have argued that Trump is using leverage over the troops to settle personal scores. But the potential veto has left Republicans split over the issue.

House Minority Leader Kevin McCarthy said his members will vote to sustain the President's veto should the measure come back to the House, which could drop the initial 335-78-1 vote below the threshold to override the veto, meaning the outcome of the override vote is in question.

Even if the House has enough votes to override the veto, the process for doing so in the Senate could take time -- unless all senators agree to expedite the process.

"If the House overrides, we will come back. If they sustain it with their vote, we won't," Senate Republican Whip John Thune of South Dakota told reporters Wednesday.

If Trump were to veto the bill this week, Congress might have enough time to vote to override the veto while it finishes passing a government funding bill and an emerging stimulus deal.

But Inhofe suggested that if the President waited to veto the legislation, it could force the Senate to return later.

"He has up to 10 days, so if he takes that time, that would have to be sometime between Christmas and New Year's, which would mean probably having to come back for that purpose, which doesn't excite many people," Inhofe said.

The $740 billion bill includes pay raises for America's soldiers, modernizations for equipment and provisions to require more scrutiny before troops are withdrawn from Germany or Afghanistan, but that hasn't stopped Trump's threats against it.

If Trump successfully vetoes the NDAA it would impact "special pay" for thousands of US service members across the military branches. Special pay includes raises for service members in highly skilled positions where there is a lot of competition with the private sector for personnel.

Trump has said he opposes it because would require the renaming of bases and because it doesn't repeal Section 230.