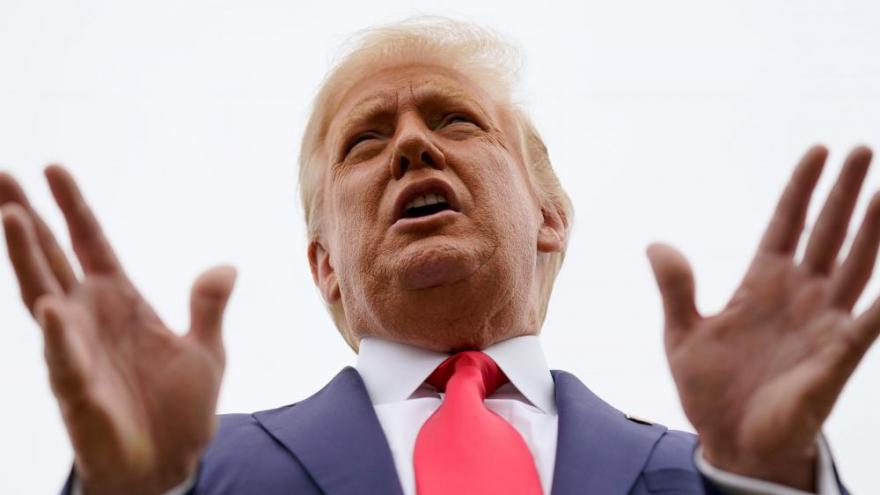 President Donald Trump, seen here speaking to the media on Tuesday in Andrews Air Force Base, MD, threatened on Wednesday to cut federal funding to several major US cities -- all run by Democrats and located in blue states -- on the grounds that their leaders are allowing "anarchy, violence, and destruction."

(CNN) -- President Donald Trump on Wednesday threatened to cut federal funding to several major US cities -- all run by Democrats and located in blue states -- on the grounds that their leaders are allowing "anarchy, violence, and destruction."

The White House announced it had instructed federal agencies to prepare reports for the White House Office of Management and Budget, setting a timeline for the agency to restrict federal grants from going to "anarchist jurisdictions." The memo specifically mentions New York City; Portland, Oregon; Seattle; and Washington, DC.

Such a move would immediately trigger legal challenges, and echo Trump's threats about withholding aid to US cities that limit cooperation between local law enforcement and federal immigration authorities, attempts that were largely blocked by federal courts.

But for Trump, it immediately adds to his frequent "law and order" messaging, which he has promoted in recent weeks. Notably absent from Wednesday's memo are Minneapolis and Kenosha, Wisconsin, which have also seen unrest this summer but are located in more competitive states as it relates to the presidential election.

It's also the latest extraordinary example of Trump seeking to use the power of the federal government to punish citizens who reside in areas that oppose him politically.

"My Administration will not allow Federal tax dollars to fund cities that allow themselves to deteriorate into lawless zones. To ensure that Federal funds are neither unduly wasted nor spent in a manner that directly violates our Government's promise to protect life, liberty, and property, it is imperative that the Federal Government review the use of Federal funds by jurisdictions that permit anarchy, violence, and destruction in America's cities," the memo states.

"It is also critical to ensure that Federal grants are used effectively, to safeguard taxpayer dollars entrusted to the Federal Government for the benefit of the American people."

The President's campaign has increasingly turned to dark themes of violence and chaos as he seeks to paint Democratic-led cities as out of control, largely in an appeal to suburban residents. Since protests spread throughout the country following the killing of George Floyd in May, Trump has worked to cultivate a tough-on-crime message.

"My Administration will do everything in its power to prevent weak mayors and lawless cities from taking Federal dollars while they let anarchists harm people, burn buildings, and ruin lives and businesses," Trump tweeted Wednesday evening.

"We're putting them on notice today."

Portland Mayor Ted Wheeler rebuked the President on Twitter for threatening to pull funds that "Americans need to get through the pandemic and economic crisis."

Wednesday's memo sets a timeline of 30 days for the Office of Management and Budget Director Russell Vought to "issue guidance to the heads of agencies on restricting eligibility of or otherwise disfavoring, to the maximum extent permitted by law, anarchist jurisdictions in the receipt of Federal grants that the agency has sufficient lawful discretion to restrict or otherwise disfavor anarchist jurisdictions from receiving."

Trump has repeatedly called on governors to deploy National Guard troops to quell violent protests, even though demonstrations have been largely peaceful. In June, following Floyd's death, roughly 5,000 National Guard troops were briefly called to patrol Washington, DC, where the federal government has authority to order such deployments.