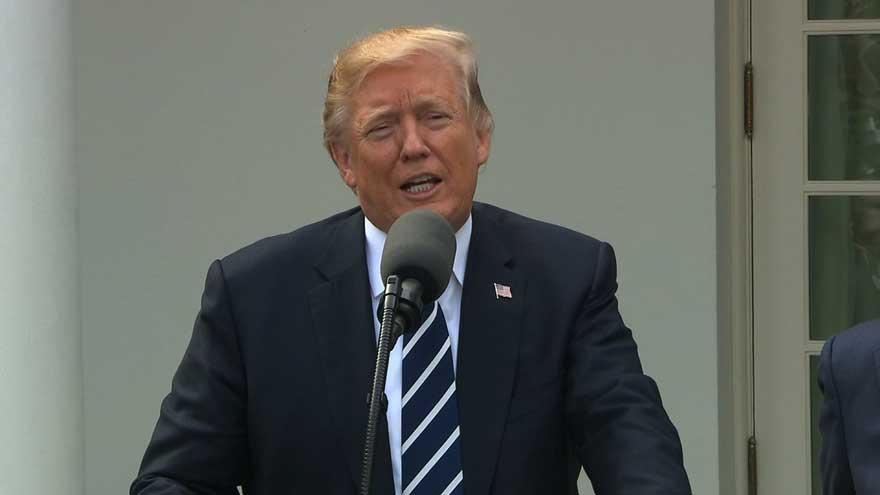 (CNN) -- President Donald Trump told reporters Monday that he would officially make a national emergency declaration to fight the opioid epidemic next week, a move he billed as a "major announcement."

The measure comes after Trump, on the steps of his golf club in New Jersey, pledged in August to declare the opioid epidemic a national emergency. The President, though, never backed up that statement by officially doing so, thus far depriving the fight against the deadly drugs a designation that would offer states and federal agencies more resources and power.

"We are going to have a major announcement, probably next week, on the drug crisis and on the opioid massive problem and I want to get that absolutely right," Trump said, billing the official declaration as a large step that took time.

During an impromptu news conference in the White House Rose Garden alongside Senate Majority Leader Mitch McConnell, Trump said he would declare a national emergency when asked why he had not followed through with his initial pledge.

His August statement was heralded by local and state drug treatment advocates who had worried Trump wouldn't follow through on campaign rhetoric to fervently combat the opioid epidemic. Those advocates have largely felt let down by the Trump administration, especially because his failed health care plan would have stripped money for treatment and let state decide whether to cover such services.

Trump's former Health and Human Services Secretary Tom Price, who resigned last month after it was revealed that he had booked extensive private jet travel in his role as secretary, had originally suggested that declaring a national emergency was unnecessary.

"We believe that at this point, the resources that we need or the focus that we need to bring to bear to the opioid crises can be addressed without the declaration of an emergency," Price said in August, "although all things are on the table for the President."

The White House commission examining the nation's opioid epidemic had told Trump that declaring a national public health emergency would be an immediate help in combating the ongoing crisis.

"Our citizens are dying. We must act boldly to stop it," the commission, headed by New Jersey Gov. Chris Christie, said in its interim report. "The first and most urgent recommendation of this Commission is direct and completely within your control. Declare a national emergency."

Christie told The Associated Press earlier this month that it was "not good" that Trump had not declared the opioid crisis a national emergency.

Since 1999, the number of American overdose deaths involving opioids has quadrupled, according to the US Centers for Disease Control and Prevention. From 2000 to 2015, more than 500,000 people died of drug overdoses, and opioids account for the majority of those. New government data show an increase in opioid overdose deaths during the first three quarters of last year, an indication that efforts to curb the epidemic are not working.

It is not often that a public health emergency is declared for something other than a natural disaster. The Department of Health and Human Services declared one in Puerto Rico last year after more than 10,000 Zika cases were reported there. Before that, the last emergency declaration, unrelated to a natural disaster, was during the 2009-10 flu season, when there was widespread concern over a potential pandemic.