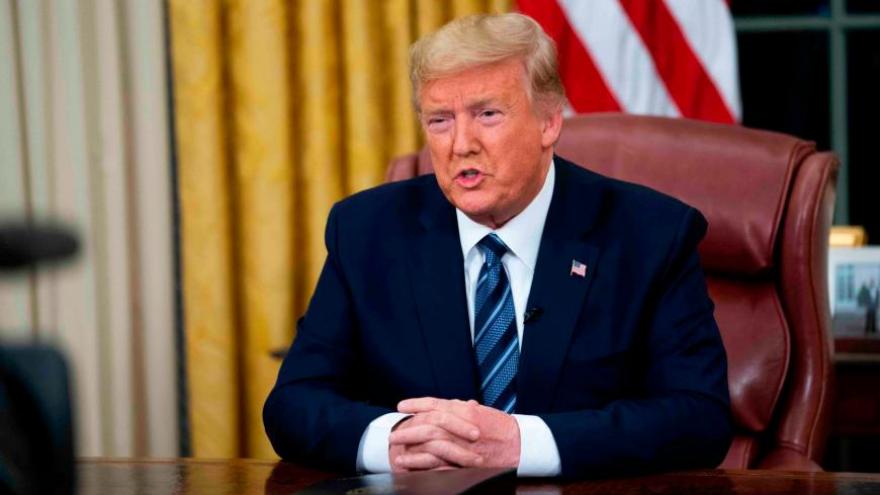 President Donald Trump said during Wednesday's White House press briefing that he will be invoking the Defense Production Act.

(CNN) -- President Donald Trump said during Wednesday's White House press briefing that he will be invoking the Defense Production Act to help make up for potential medical supply shortages and deploy two hospital ships as the US battles the coronavirus pandemic.

Trump said that he sees the country on wartime footing and himself as a wartime president amid the coronavirus crisis.

"I view it -- in a sense as a wartime president," Trump said after announcing he was invoking the Defense Production Act, which was established in 1950 in response to production needs during the Korean War.

The Federal Emergency Management Agency describes the act as "the primary source of presidential authorities to expedite and expand the supply of resources from the US industrial base to support military, energy, space and homeland security programs."

An executive order issued Wednesday afternoon indicated that the President will use the act to obtain "health and medical resources needed to respond to the spread of COVID-19, including personal protective equipment and ventilators."

The order also states that Health and Human Services Secretary Alex Azar may consult with other agency heads to determine "the proper nationwide priorities and allocation of all health and medical resources, including controlling the distribution of such materials ... in the civilian market, for responding to the spread of COVID-19 within the United States."

Azar is also responsible for issuing government purchase orders and contracts related to Covid-19, and may "adopt and revise appropriate rules and regulations as may be necessary to implement" Trump's executive order.

The President stressed later Wednesday that he would only use the powers granted under the Defense Production Act "in a worst case scenario."

"I only signed the Defense Production Act to combat the Chinese Virus should we need to invoke it in a worst case scenario in the future," Trump tweeted. "Hopefully there will be no need, but we are all in this TOGETHER!"

The President also announced during Wednesday's briefing that two hospital ships were preparing to deploy in response to New York, which has been heavily impacted by the coronavirus, though Pentagon spokesman Jonathan Hoffman said only one ship, the US Navy hospital USNS Comfort, was currently slated to go there at this time.

New York Gov. Andrew Cuomo, who has at times expressed frustration with the President's lack of action to help his state, said he spoke with Trump Tuesday and Wednesday morning in what Cuomo described as an "open and honest conversation."

"He is fully engaged on trying to help New York," Cuomo said, calling the President's actions "creative' and "energetic."

Cuomo is also meeting with the Army Corps of Engineers Wednesday afternoon.

But the USNS Comfort could still be a "few weeks" away from arriving in New York, a US defense official told CNN.

Trump said Wednesday that the administration is still evaluating where to send ships on the West Coast.

Defense Secretary Mark Esper said at Wednesday's briefing that the Defense Department will make available up to 5 million N95 masks and other personal protective equipment from US strategic reserves.

"The first 1 million masks will be available immediately," he said.

He also said they are also prepared to distribute "up to 2,000 operational deployable ventilators for use as needed" the Department of Health and Human Services.

The medical supply and personnel assistance comes following growing concerns for weeks, if not months, about a broad variety of shortages at hospitals.

Former US Surgeon General Vivek Murthy said Sunday some doctors and nurses are already short on equipment such as gowns and gloves, and industry groups have been sounding the alarm with the Trump administration about possible shortages in supplies for several days, even weeks. State officials and hospitals have also been sounding the alarm about projected shortages of hospital beds to deal with critical coronavirus cases.

The major US lab industry group has raised concerns with federal agencies over the past week about potential shortages of supplies, including N95 face masks and hand sanitizer.

Officials from the Department of Health and Human Services told medical professionals on a conference call Monday that there was not enough personal protective equipment in the Strategic National Stockpile to fulfill anticipated gaps in state and local supplies, according to a source who was on the call.

CNN reported last month that the Trump administration was considering using the law to expand the production medical supplies and equipment to deal with the virus.