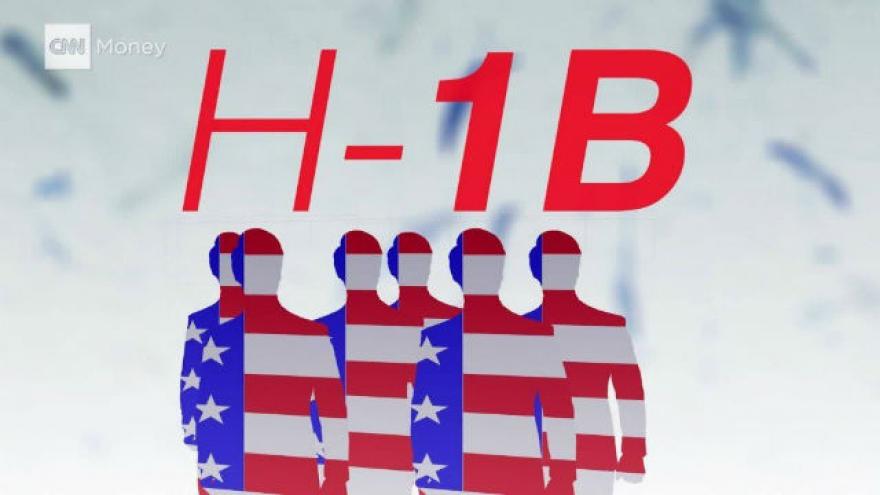 The Trump administration plans to make it illegal for the spouses of thousands of immigrant workers to get jobs in the U.S. Since 2015, the spouses of H-1B visa holders waiting for green cards have been eligible to work in the U.S. on H-4 dependent visas, thanks to a rule introduced by President Obama. Many H-1B visa holders are highly skilled, working in the tech sector. Photo courtesy CNNMoney

(CNN Money) -- The Trump administration will propose revoking a rule that makes spouses of thousands of immigrant workers eligible to work while in the U.S., potentially complicating a major driver of technology jobs.

Since 2015, the spouses of H-1B, or high-skilled, visa holders waiting for green cards have been eligible to work in the U.S. on H-4 dependent visas, under a rule introduced by President Obama's administration. The tech sector is a major employer of H-1B visa holders, a category of visas for highly skilled jobs.

But in a statement Thursday, the Department of Homeland Security said it intends to do away with that rule.

The department didn't explain its reasons in the announcement, saying only it was acting "in light of" the "Buy American, Hire American" executive order that President Trump signed in April. The formal process to rescind the rule will still need to be initiated at a later date.

While changing the rule wouldn't prevent spouses of H-1B holders from pursuing other avenues for work authorization, it could deter a number of high-skilled immigrants from staying in the U.S. if their spouses can't easily find work.

The order also called for the H-1B visa program for skilled workers to be reviewed with the aim of reforming it.

As well as dropping the rule allowing spouses to work, the Department of Homeland Security statement mentioned plans for other changes to the H-1B visa program. They include revising the definition of what occupations are eligible for the program "to increase focus on truly obtaining the best and brightest foreign nationals." That would be a standard potentially far above what is currently understood under the law.

The Obama-era rule allowing spouses to work already faces a legal challenge. A group called Save Jobs USA filed a lawsuit in April 2015 arguing that it threatens American jobs.

It has continued to press the case following Trump's election, and Attorney General Jeff Sessions has said in the past that the H-4 rule "hurts American workers."

The Trump administration's plans to overhaul the H-1B program has caused particular alarm in India, which accounts for 70% of all H-1B workers.

The H-1B is a common visa route for highly skilled foreigners to find work at companies in the U.S. It's valid for three years, and can be renewed for another three years.

It's a program that's particularly popular in the tech community, with many engineers vying for one of the program's 85,000 visas each year.

In October, the government said it was toughening up the process for renewing the visa. The U.S. Citizenship and Immigration Services instructed its officers to review requests for renewal as thoroughly as they would initial visa applications.

-- Tal Kopan contributed to this report.