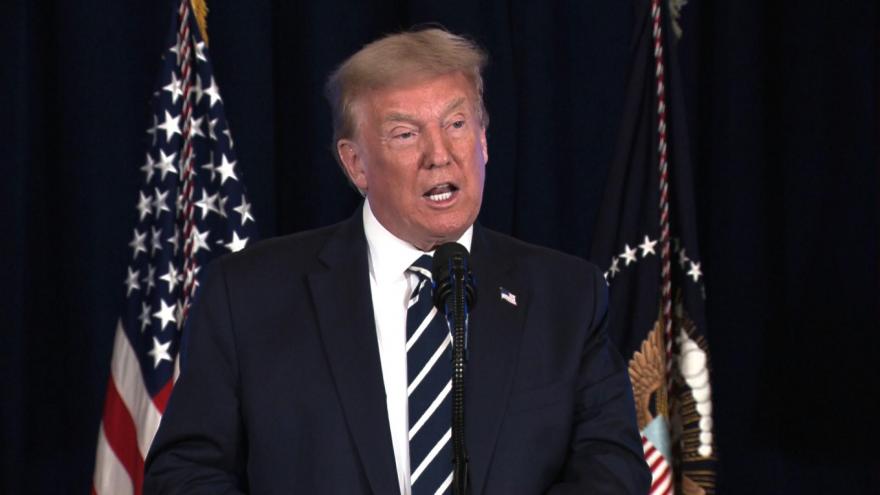 (CNN) -- President Donald Trump tried to assert executive power by signing four actions on coronavirus relief Saturday, one of which will provide as much as $400 in enhanced unemployment benefits after Democrats and the White House were unable to reach an agreement on a stimulus bill this week.

But that memorandum on enhanced unemployment benefits -- 25% of which states are being asked to cover -- has more strings attached than the White House acknowledged and is seen as a cumbersome effort that may not help a lot of the unemployed.

The other three actions he signed include a memorandum on a payroll tax holiday for Americans earning less than $100,000 a year, an executive order on "assistance to renters and homeowners" and a memorandum on deferring student loan payments.

"I'm taking action to provide an additional or extra $400 a week and expanded benefits, $400. That's generous but we want to take care of our people," Trump said about his memorandum on unemployment benefits at his golf club in Bedminster, New Jersey.

Up to $44 billion from the Disaster Relief Fund would be made available for "lost wage assistance" to supplement state payments, according to the memorandum issued by the White House shortly after Trump's news conference.

But when asked about the President's executive action asking states to pay 25% of the $400 unemployment relief, an official from a northeastern state run by a Democratic governor laughed. "We don't have that money," the official said.

This official went on to say that they were not given any heads up on this executive action and that in the wake of the pandemic, their funds are completely tapped.

In fact, states have asked Congress to provide them with an additional $500 billion to help shore up their budgets, which have been crushed by the loss of tax revenue amid the pandemic. This has been one of the main points of contention between Democrats, who want to allocate additional aid, and Republicans, who don't want to bail out what they say are badly managed states.

Several experts told CNN there are major questions about how many states may be able to afford the extra cost. If a state says that it does not have the funds or does not want to enter into the agreement with the federal government, the unemployed people in that state would receive zero dollars in the extra benefits (they would still receive the normal state unemployment insurance).

Also, because Congress has not authorized an extension of extra federal unemployment assistance, the state will have to set up an entirely new system to deliver the additional aid, which could take months. The memorandum signed by Trump was not an unemployment insurance benefit and would not come through the unemployment insurance program already instituted in states.

Michelle Evermore, an unemployment expert at the National Employment Law Project and one of the nation's leading experts on unemployment, told CNN she considered the chances of this effort helping many of the newly unemployed due to Covid "low."

"This is a brand new program, it's an assistance program for lost wages, it requires the creation of an entirely new administrative system. The states that don't get the program set up as quickly as other states aren't going to get any funding because it will run out," Evermore said.

Lastly, according to the memorandum, an individual can only receive the $300 federal benefit if he or she first qualifies for $100 in aid from their state. Evermore said this will cut out a large group of people. "There are so many problems with people getting a benefit under this," she told CNN.

Trump administration officials and Republicans haven't wanted to continue the $600 supplement, which expired July 31 and was part of the historic expansion to the nation's unemployment benefits program lawmakers passed in late March, because they say it could disincentivize people's return to work. When combined with state benefits, about two-thirds of workers make more than they earned at their former jobs, a University of Chicago study found. GOP lawmakers initially floated giving the jobless a $200 supplement for at least two months and then a payment that would provide 70% of the laid-off worker's former wage, when added to state benefits.

Democrats, on the other hand, say the economy is still weak and the jobless need the $600 to pay their bills.

"Struggling Americans need action now. Since Democrats have sabotaged backroom talks with absurd demands that would not help working people, I support President Trump exploring his options to get unemployment benefits and other relief to the people who need them the most," McConnell said in a statement Saturday.

House Speaker Nancy Pelosi and Senate Minority Leader Chuck Schumer criticized Trump's executive actions, describing them as "meager" and accusing the President of not grasping the severity of the current crisis.

"We're disappointed that instead of putting in the work to solve Americans' problems, the President instead chose to stay on his luxury golf course to announce unworkable, weak and narrow policy announcements to slash the unemployment benefits that millions desperately need and endanger seniors' Social Security and Medicare," Pelosi and Schumer said in a statement.

"This is no art of the deal," Biden said in a statement. "This is not presidential leadership. These orders are not real solutions. They are just another cynical ploy designed to deflect responsibility. Some measures do far more harm than good."

Trump said he believes that the unemployment aid will be "rapidly distributed," even though there are potential challenges over the legality of his executive action.

At least one Republican criticized Trump's efforts at executive policy making, specifically in regards to the payroll tax.

"The pen-and-phone theory of executive lawmaking is unconstitutional slop," Sen. Ben Sasse of Nebraska said in a statement Saturday night. "President Obama did not have the power to unilaterally rewrite immigration law with DACA, and President Trump does not have the power to unilaterally rewrite the payroll tax law. Under the Constitution, that power belongs to the American people acting through their members of Congress."

The payroll tax cut is one of Trump's favorite tax moves that both parties had opposed, including in the latest stimulus bill. One of his memoranda calls for deferring the employee portion of payroll taxes -- 6.2% for Social Security and 1.45% for Medicare -- for workers making less than $100,000 a year through the rest of 2020.

If he's reelected, Trump said, he plans to forgive the taxes and make permanent cuts to the payroll taxes.

"I'm going to make them all permanent," he said.

Otherwise, presumably, workers would have to pay the taxes at the end of the year.

The controversial measure, however, wouldn't do anything to help the unemployed and would likely weaken the already strained finances of Social Security and Medicare.

He did not provide further details.

CLARIFICATION: This headline and story have been updated to reflect that Trump signed one executive order and three memoranda.