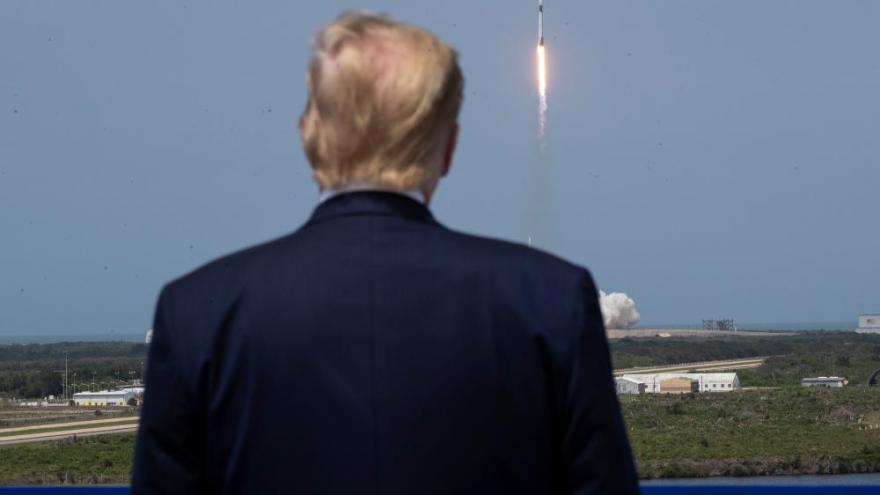 (CNN) -- Following the successful launch of the NASA/SpaceX rocket on Saturday, President Donald Trump claimed that America has regained its position as the "world leader" in space.

While speaking at the Kennedy Space Center, Trump said that "the United States has regained our place of prestige as the world leader."

The President continued: "You can't be number one on earth if you are number two in space," and that "we are not going to be number two anywhere."

Trump's comments come as the US is reeling from the coronavirus pandemic and rising racial tension this week following the death of an unarmed African American man named George Floyd. Protests were underway in major cities across the nation as Trump praised the American spirit "which powered our astronauts to the moon" and has "also helped lift our country to ever greater heights of justice and opportunity throughout our history."

Earlier in the day, Trump offered congratulatory remarks after the launch, calling it a "beautiful sight."

"It's incredible, the technology, the power. I'm so proud of the people at NASA, all the people that worked together, public and private. When you see a sight like that it's incredible," Trump said.

The rocket launch, which took place in Cape Canaveral, Florida, marked the first American astronauts from American soil on an American made rocket in nearly a decade. In attendance at the event was Trump, who was not wearing a face mask, alongside Vice President Mike Pence and Second Lady Karen Pence, who also were without face masks. Noticeably absent was first lady Melania Trump.

The two NASA astronauts onboard the SpaceX Crew Dragon Spacecraft are Douglas Hurley and Robert Behnken.

Trump spoke to SpaceX CEO Elon Musk after the launch.

"I speak to him all the time. Great guy. He's one of our great brains, we like great brains, and Elon's done a fantastic job," Trump said.

Trump also said he spoke with the astronauts prior to Saturday's launch, saying he told them, "God bless you." He praised the astronauts for having a lot of courage.

Trump praised America as "the leader of the world again" in space travel and talked about a future mission to Mars.

When asked about what this launch means coming amid the coronavirus pandemic and protests across the country, Trump called it "such a great inspiration for our country."

"[I] stand before you in firm opposition to anyone exploiting this tragedy to loot, rob, attack and menace. Healing not hatred. Justice not chaos," Trump said.

Trump also said he spoke with Floyd's family on Friday, "expressing the sorrow of the entire nation for their loss."

Pence also addressed the current mood of the nation. "As the nation reels from the tragic death of George Floyd and violent protests of the past few days, I believe with all my heart that millions of Americans today will find the same inspiration and unity of purpose that we found in those days in the 1960's," the vice president said.

Pence added that there is no tolerance for racism or violence in America and called for "law and order in our streets."

"In America, every life matters, and there's not tolerance for racism or violence in the streets of this country. And as the President has made clear, we will honor the memory of George Floyd. Justice will be served. We will have law and order in our streets and we will heal our land," Pence said.