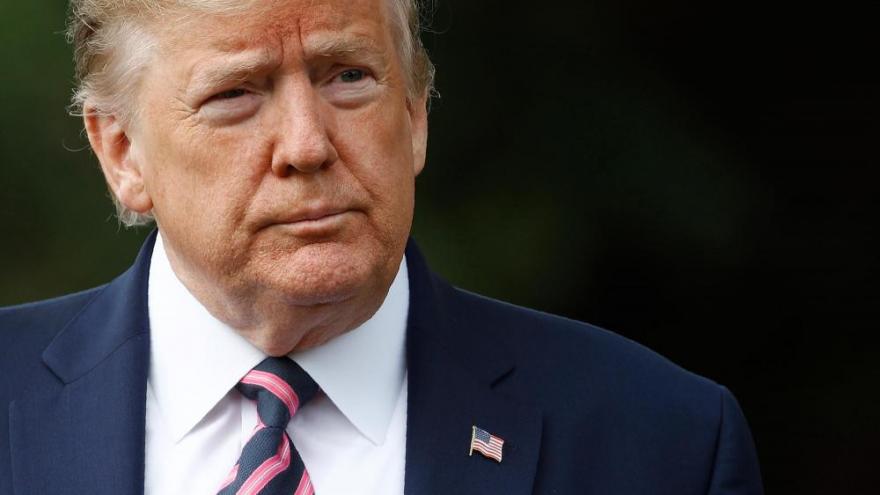 President Donald Trump vetoed the Iran War Powers resolution, a bipartisan effort to rein in presidential authority to use military force against Iran without congressional approval.

(CNN) -- President Donald Trump on Wednesday vetoed the Iran War Powers resolution, a bipartisan effort to rein in presidential authority to use military force against Iran without congressional approval.

Trump called it a "very insulting resolution" and argued the measure was "based on misunderstandings of facts and law" in a statement.

"This indefinite prohibition is unnecessary and dangerous," the White House said in a separate message to the Senate on Wednesday.

Trump had long threatened a veto, which Congress isn't expected to have enough votes to override.

But passage of the resolution, which Democratic Sen. Tim Kaine of Virginia introduced following the President's decision to order a strike that killed Iranian commander Qasem Soleimani in January, represented a significant rebuke of the President and highlighted congressional support for efforts to check the executive branch's war-making powers.

Trump in his Wednesday statement claimed the resolution was "introduced by Democrats as part of a strategy to win an election on November 3 by dividing the Republican Party."

The Senate passed the resolution with bipartisan support despite the President's vocal opposition. The Democratic-controlled House passed it the following month with a handful of Republicans crossing the aisle.

The resolution called for "the President to terminate the use of United States Armed Forces for hostilities against the Islamic Republic of Iran or any part of its government or military, unless explicitly authorized by a declaration of war or specific authorization for use of military force against Iran."

It included a provision ensuring the President would still be able to defend the United States from "imminent attack" absent congressional approval.

"Contrary to the resolution, the United States is not engaged in the use of force against Iran. Four months ago, I took decisive action to eliminate Qassem Soleimani while he was in Iraq. Iran responded by launching a series of missiles at our forces stationed in Iraq. No one was killed by these attacks," Trump said in his statement.

He claimed the strike against Soleimani "was fully authorized by law, including the Authorization for Use of Military Force Against Iraq Resolution of 2002 and Article II of the Constitution."

"The resolution implies that the President's constitutional authority to use military force is limited to defense of the United States and its forces against imminent attack. That is incorrect," Trump said. "We live in a hostile world of evolving threats, and the Constitution recognizes that the President must be able to anticipate our adversaries' next moves and take swift and decisive action in response. That's what I did!"

In the days and weeks after the strike, the Trump administration repeatedly insisted its decision to kill Soleimani was justified because he posed an "imminent threat" to American lives. But it ultimately moved away from that argument after being pressed for details amid rampant skepticism from Democrats.

The phrase "imminent threat" was also notably absent in an official White House report sent to Congress in February that outlined its legal and policy rationale.

The notice not only outlined the administration's legal justification for killing Soleimani, but acknowledged that the White House expanded its interpretation of the 2002 Authorization for Use of Military Force to include military action against Iran.

At the time the Senate passed the resolution, Kaine argued it wasn't intended to rein in any one president's power. "It would apply equally to any President," he said. "It's fundamentally about Congress owning up to and taking responsibility for the most significant decision that we should ever have to make."

This story has been updated with additional information about the administration's legal justification for the strike.

One in five Wendy's is out of beef, analyst says