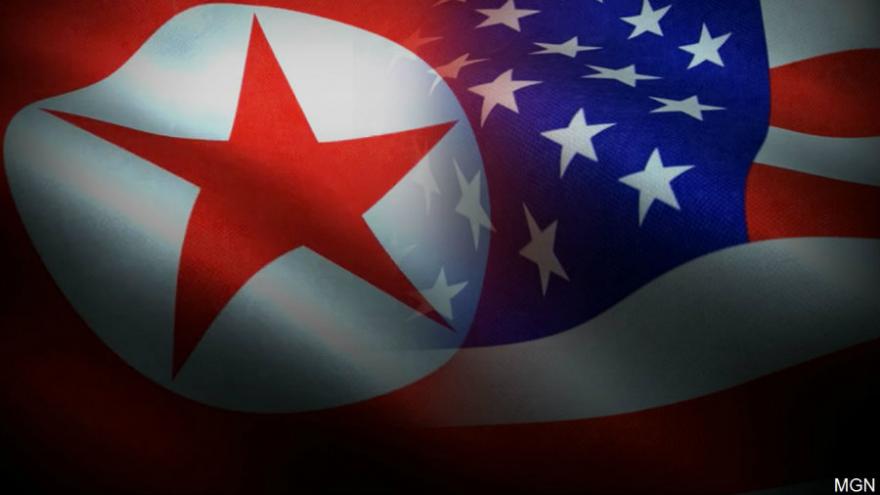 SEOUL, South Korea (AP) — North Korea said Saturday that it will dismantle its nuclear test site in less than two weeks, in a dramatic event that would set up leader Kim Jong Un's summit with President Donald Trump next month. Trump welcomed the "gracious gesture."

In a statement carried by state media, North Korea's Foreign Ministry said all of the tunnels at the country's northeastern testing ground will be destroyed by explosion, and observation and research facilities and ground-based guard units will also be removed.

Kim had already revealed plans to shut the test site by the end of May during his summit with South Korean President Moon Jae-in last month. Analysts say that while the closure of the site is important, it doesn't represent a material step toward full denuclearization.

"A ceremony for dismantling the nuclear test ground is now scheduled between May 23 and 25," depending on weather, the Foreign Ministry's statement said, adding that journalists from the United States, South Korea, China, Russia and Britain will be invited to witness the dismantling.

The ministry said the North will continue to "promote close contacts and dialogue with the neighboring countries and the international society so as to safeguard peace and stability on the Korean Peninsula and over the globe."

Trump, in a tweet Saturday, thanked North Korea for its plan to dismantle the nuclear test site, calling it "a very smart and gracious gesture!"

Following the Moon-Kim meeting, Moon's office said Kim was willing to disclose the process to international experts, but the North's statement Saturday didn't address allowing experts on the site.

South Korea had no immediate response to the statement.

The North's announcement comes days after Washington announced that the historic summit between Kim and Trump will be held June 12 in Singapore.

South Korea has said Kim has genuine interest in dealing away his nuclear weapons in return for economic benefits. However, there are lingering doubts about whether Kim would ever agree to fully relinquish the weapons he probably views as his only guarantee of survival.

During their meeting at a border truce village, Moon and Kim vaguely promised to work toward the "complete denuclearization" of the Korean Peninsula, but made no references to verification or timetables.

North Korea for decades has been pushing a concept of "denuclearization" that bears no resemblance to the American definition. The North has been vowing to pursue nuclear development unless Washington removes its 28,500 troops from South Korea and the nuclear umbrella defending South Korea and Japan.

Some experts believe Kim may try to drag out the process or seek a deal in which he gives away his intercontinental ballistic missiles but retains some of his shorter-range arsenal in return for a reduced U.S. military presence in the South. This could satisfy Trump but undermine the alliance between Washington and Seoul.

Kim declared his nuclear force as complete in December, following North Korea's most powerful nuclear test to date in September and three flight tests of ICBMs designed to reach the U.S. mainland.

North Korea announced at a ruling party meeting last month that it was suspending all tests of nuclear devices and ICBMs, as well as the plan to close the nuclear testing ground.

Kim said during the meeting that the nuclear test site's mission had come "to an end" because the North had completed developing nuclear-capable intermediate-range missiles, ICBMs and other strike means.

The North also said for the first time at the meeting that it had been conducting "subcritical" nuclear tests. These refer to experiments involving a subcritical mass of nuclear materials that allow scientists to examine the performance and safety of weapons without triggering a nuclear chain reaction and explosion.

North Korea's reference to such activity is designed to communicate that even without underground testing, the country intends to maintain its nuclear arsenal and be a "responsible" steward of those weapons at the same time, said Andrea Berger, a senior analyst at the Middlebury Institute of International Studies.

Still, the closure of the underground testing site could be a useful precedent for Washington and Seoul as they proceed with the nuclear negotiations with Pyongyang, analysts say.

"Now that North Korea has accepted in principle that agreements should be verified, U.S. negotiators should hold them to this standard for any subsequent agreement," said Adam Mount, a senior defense analyst at the Federation of American Scientists. "It will make it more difficult for Kim Jong Un to deny inspections now that he has placed them on the table."

North Korea has invited the outside world to witness the dismantling of its nuclear facilities before. In June 2008, international broadcasters were allowed to show the demolishing of a cooling tower at the Nyongbyon reactor site, a year after the North reached an agreement with the U.S. and four other nations to disable its nuclear facilities in return for an aid package worth about $400 million.

But in September 2008, the North declared that it would resume reprocessing plutonium, complaining that Washington wasn't fulfilling its promise to remove the country from the U.S. list of state sponsors of terrorism.

The administration of George W. Bush removed North Korea from the list in October 2008 after the country agreed to continue disabling its nuclear plant. However, a final attempt by Bush to complete an agreement to fully dismantle North Korea's nuclear weapons program collapsed that December when the North refused to accept U.S.-proposed verification methods.

The North went on to conduct its second nuclear test in May 2009.