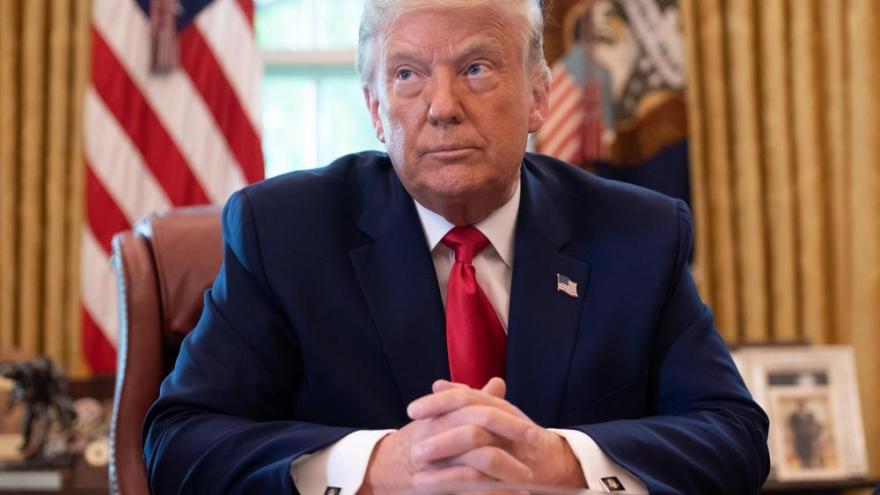 US President Donald Trump speaks during an event commemorating the repatriation of Native American remains and artifacts from Finland in the Oval Office of the White House in Washington, DC, September 17, 2020. (Photo by SAUL LOEB / AFP) (Photo by SAUL LOEB/AFP via Getty Images)

(CNN) -- President Donald Trump will not attend the United Nations General Assembly in person next week in the latest example of how the coronavirus pandemic has disrupted the way world leaders interact.

The decision, which White House chief of staff Mark Meadows revealed to reporters Thursday evening, will keep the President at least physically distant from the annual forum in New York City where even world leaders who don't believe in global relationships make a pilgrimage to see and be seen.

It's unclear in what capacity the President will participate in the event virtually.

The adjustment underscores the difficulty in getting world leaders to gather during a still-raging global pandemic. Last month, Trump announced he will look to postpone the G7 meeting until after the election in November due to Covid-19 concerns.

"I'm much more inclined to do it sometime after the election," Trump told reporters at a news briefing. "We haven't sent out invitations. We're talking to them."

He noted he planned on inviting countries that aren't formal members of the Group of 7.

The President and his aides have regularly criticized the United Nations for being ineffective at solving the world's most intractable problems and for taking positions on Israel and other matters that oppose the administration's stance.

Even before he was president, Trump took issue with the green marble tiles that adorn the speaker's platform at the United Nations building.

At last year's UN General Assembly, Trump had announced new initiatives as part of a global call for protecting religious freedom, which his aides characterized as the centerpiece of his visit to the conference of world leaders.

The President said that the US would dedicate "$25 million to protect religious freedom, religious sites, and relics." In addition, the US will be "forming a coalition of US businesses for the protection of religious freedom."

Trump had said he is the first US president to host such a meeting.

"That's very sad in many ways," he said at the time. The President also called the issue one of his "highest priorities."