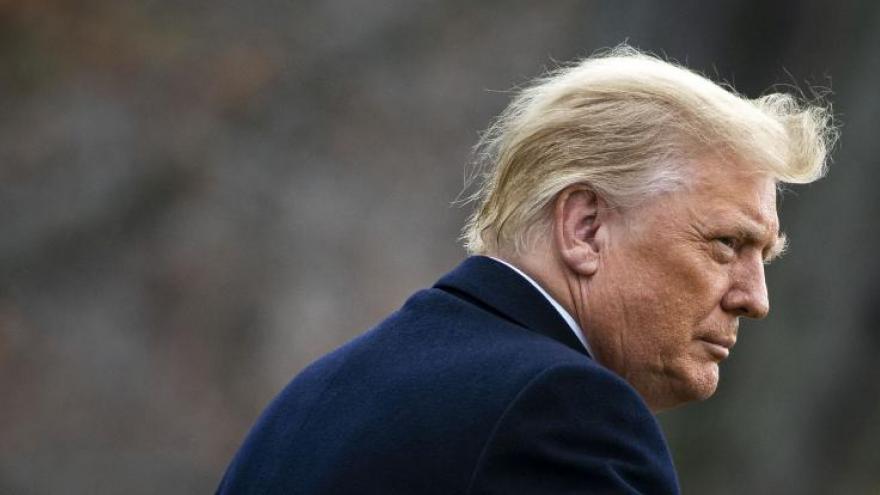 U.S. President Donald Trump departs on the South Lawn of the White House, on December 12, 2020 in Washington, DC.

(CNN) -- Experienced prosecutors, election lawyers and some public officials have piled on calling for criminal investigations into whether President Donald Trump broke election fraud laws when he pressured Georgia officials on a phone call Saturday to "find" 11,870 votes that would reverse his loss in the state.

While the path to a federal criminal case against the outgoing President isn't an easy one to make, Georgia officials said the state could be considering a serious inquiry and the matter has already been referred to the FBI.

"If you look at the statutes, both the federal statutes and the Georgia state statutes, if you engage in some effort to solicit or procure election fraud, and you knowingly do that, that's potentially a federal or state crime," Preet Bharara, the former US attorney in Manhattan, said on CNN on Sunday.

Elie Honig, a former federal prosecutor and CNN contributor, was urging criminal investigation into Trump on Monday, arguing that at some point, prosecutors couldn't keep looking past such shocking statements. The prominent elections law expert Rick Hasen also wrote on Monday that Trump should be prosecuted or at least investigated.

Proving the President intended to commit a crime is another matter. Trump would likely face a jury if he were charged, and prosecutors would need to prove what he meant on the call.

Prosecutions of former presidents in the US are unheard of in modern times, and the presidency has immense power that lends protection to Trump. The Justice Department previously shied away from coming close to charging Trump for obstruction in the Mueller investigation and after his call asking Ukraine for political help, which led to the President's impeachment.

President-elect Joe Biden, who defeated Trump with 306 electoral votes, has indicated he would want the country to move on rather than dwell on scandals from the Trump presidency and would leave decisions up to the Justice Department.

CNN has previously reported Trump has explored the possibility of granting himself a self-pardon, though that could only provide him immunity from federal crimes. The Justice Department previously reasoned a president couldn't pardon himself, but could temporarily give power to his vice president to do so -- but there has been no indication that would happen.

The case itself over Trump's pressure to force a fraudulent election result in Georgia, if pursued, would take time, and might depend on the parameters of conspiracy laws.

If Trump actually won the election and was cheated, then proving his intentions to find phantom votes would be a harder task for prosecutors in court, Bharara said, though not impossible.

"He was smart enough to get elected, he's smart enough to try to figure out ways to try to undo the election, even if they're not going to amount to anything," Bharara said. "And the fact that he is very specific about the number of votes that he needs ... That's a pretty powerful argument that he knows what he's doing."

The President cannot pardon himself from state crimes. New York state has already made public that it's investigating Trump for business-related crimes, making a state charge after Trump leaves the presidency still a possibility on other matters. Trump has not been charged with any crime.

Criminal referrals to the FBI

Two Democratic members of the US House, Ted Lieu and Kathleen Rice, wrote to the FBI Director Chris Wray on Monday, asking the agency to open a criminal investigation into the President immediately.

They pointed out federal criminal code that prohibits election fraud or refusing to count valid votes, and Georgia state law that outlines a felony in the state when a person encourages another person into election fraud. That state crime is punishable by imprisonment for not less than one nor more than three years, according to Georgia code.

The FBI confirmed it received the request from the lawmakers and didn't comment further. Criminal referrals about political incendiary moments are relatively common and infrequently result in law enforcement consequences.

Yet the FBI and Justice Department have been down this road before, following Trump's call with Ukrainian President Volodymyr Zelensky. After Trump asked Ukraine to investigate his then-opponent Biden, the FBI and Justice Department received several criminal referrals from lawmakers and even other parts of the executive branch. But the Justice Department, then led by Attorney General William Barr, quickly shot down opening an investigation into the President, after having departmental staff analyzing the possibility of a campaign finance violation. Congress, instead, picked up the issue, impeaching Trump for abuse of power.

A Justice Department spokesman declined to comment on the Georgia call on Monday.

Some Republicans on Capitol Hill downplayed Trump's remarks on the call or defended him, though others, like Liz Cheney, who is in the House Republican leadership, said it was "deeply troubling."

With 16 days left in his presidential term and the joint session of Congress set for Wednesday to confirm Biden's electoral victory, a quick impeachment is unlikely. However, Democratic Rep. Hank Johnson of Georgia, said he plans to introduce a resolution to censure Trump, a largely symbolic move.

Georgia Secretary of State Brad Raffensperger said on Monday that local prosecutors may launch an investigation.

"I believe that because I had a conversation with the President, also had a conversation with our chief investigator, after we did the signature match audit of Cobb County last week, there may be a conflict of interest," Raffensperger said in an interview with ABC's Good Morning America. "I understand that the Fulton County District Attorney wants to look at [it], maybe that's the appropriate venue for it to go."

The Fulton County District Attorney Fani T. Willis said in a statement on Monday that she found the phone call with Trump and Raffensperger "disturbing" and had a received a request to investigate Trump's actions already.

"It is my understanding from news reports that a member of the State Election Board has requested that the Secretary's Elections Division investigate the call, after which the Board can refer the case to my office and the state Attorney General," Willis said. "I will enforce the law without fear or favor ... Once the investigation is complete, this matter, like all matters, will be handled by our office based on the facts and the law."

Raffensperger also said during the interview that he did not feel pressured by Trump when he asked him to recalculate the votes that put Biden as the winner in Georgia.

When asked what he was thinking and feeling during the call, Raffensperger said "for the last two months we've been fighting a rumor Whac-a-Mole ... We believe that truth matters."

In the election law realm, some experts say if there is criminal fallout for Trump, it will take time. Political fallout, however, is immediate -- and, unusually, can be gauged by the upcoming runoff election for two Senate seats from Georgia. Those elections will decide the majority party in the US Senate.

"Our advice is always don't try to make up or steal votes," Ben Ginsberg, a longtime election lawyer for Republicans and CNN contributor, said on Monday.

Politically, what Trump said "is beyond the pale, beyond norms, beyond common decency, if not beyond the law."

Because Raffensperger, an elected Republican, clearly refused what Trump was suggesting he do, Ginsberg said, that may set the situation up for Trump to face heavier political fallout.

"The political damage will be far greater than any legal damage since he's leaving office in 16 days," and investigations take time. "You'll know the answer Tuesday night in Georgia and Wednesday in the votes on the Electoral College," Ginsberg added.

And while Trump may not face legal jeopardy, lawyer Cleta Mitchell, who participated on the President's behalf on the call, already is under scrutiny for her role in the call.

The large national law firm affiliated with Mitchell distanced itself from her -- an indication that Trump's request was abhorrent even in the usually reticent and politically tolerant legal industry.

"Our policy did allow our attorneys to participate in observing election recounts and similar actions on a voluntary basis in their individual capacity as private citizens so long as they did not act as legal advisers. We are aware of, and are concerned by, Ms. Mitchell's participation in the January 2 conference call and are working to understand her involvement more thoroughly," Dan Farrell, a spokesman for the law firm Foley & Lardner where Mitchell, who's long pushed unsubstantiated allegations of fraud in elections, is a partner.

Mitchell did not respond to an inquiry from CNN.