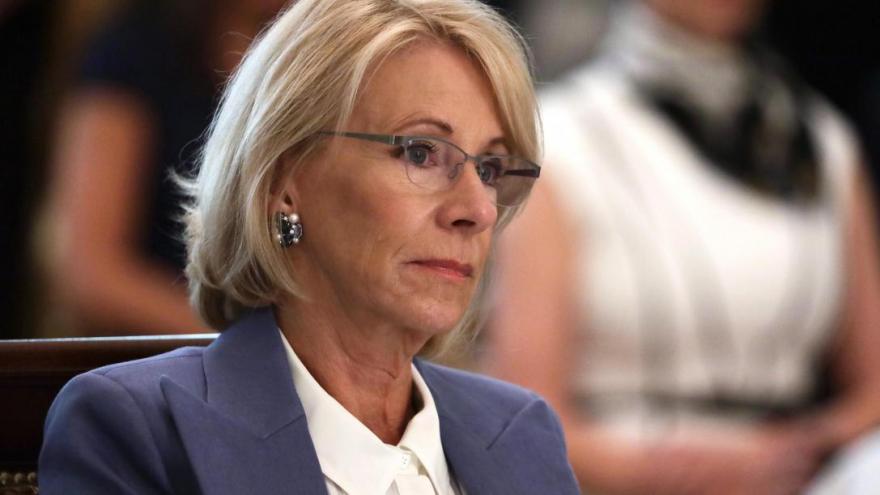 Secretary of Education Betsy DeVos, seen here at the White House on May 19, 2020 in Washington, DC, has submitted her resignation.

(CNN) -- Education Secretary Betsy DeVos has submitted her resignation, saying President Donald Trump's role in spurring the mob that breached the US Capitol on Wednesday was "the inflection point," making her the second Cabinet member to resign over the incident.

In her resignation letter to Trump dated Thursday, which CNN obtained a copy of, DeVos called the rioters' behavior "unconscionable" and wrote, "There is no mistaking the impact your rhetoric had on the situation, and it is the inflection point for me."

"Impressionable children are watching all of this, and they are learning from us," she added.

"I believe we each have a moral obligation to exercise good judgment and model the behavior we hope they would emulate. They must know from us that America is greater than what transpired yesterday."

DeVos joins Transportation Secretary Elaine Chao, who had announced her resignation earlier Thursday after taking "time to absorb" the insurrection on Capitol Hill and the President's response to it, according to a senior administration official.

"Today, there was a lot of soul-searching and discussion," a senior official said. "It was obviously the right thing to do."

The wave of abrupt exits came after Trump supporters -- spurred by the President -- had breached the Capitol on Wednesday and engulfed the nation's capital in chaos.

After hundreds of pro-Trump rioters pushed through barriers set up along the perimeter of the Capitol, demonstrators eventually made their way into the building and the House floor was evacuated by police.

Only after pleading from aides and congressional allies inside the besieged Capitol did Trump release a video urging the rioters to "go home," while still fanning their baseless grievances about a stolen election.

DeVos had said in a statement released Wednesday in the aftermath of the breach: "The eyes of America's children and students -- the rising generation who will inherit the republic we leave them -- are watching what is unfolding in Washington today. We must set a better example for them, and we must teach them the solemn obligations and duties that come with the title 'American.'"

A peaceful transfer of power, she said, "is what separates American representative democracy from banana republics."

A top Republican donor and school choice activist, DeVos was tapped to head the Department of Education in 2016. The President hailed her in a statement at the time as "a brilliant and passionate education advocate."

"Under her leadership we will reform the US education system and break the bureaucracy that is holding our children back so that we can deliver world-class education and school choice to all families," Trump said.

While DeVos' tenure was marred by intense criticism of her education policies -- particularly her support for charter schools -- her eagerness and effectiveness at delivering on conservative priorities kept allies of Trump happy.

Frederick M. Hess, an education policy expert at the conservative American Enterprise Institute, previously called her a "trust buster" and a threat to the education establishment.

That includes her advocacy for charter schools as well as rolling back of numerous Obama-era regulations and guidelines. Among these was the institution of new protections for college students accused of sexual assault, which her department called a restoration of due process.

Recently, she faced considerable scrutiny internally for rarely attending coronavirus meetings, despite the heavy focus on whether schools should remain open in the spring or open as scheduled in the fall.

But even in her resignation letter, DeVos touted what she called the Education Department's advocacy for "forgotten students" as she bemoaned how Wednesday's violence took away from the Trump administration's "many accomplishments."

"Holding this position has been the honor of a lifetime," DeVos said in concluding her message, "and I will be forever grateful for the opportunity to serve America and her students."