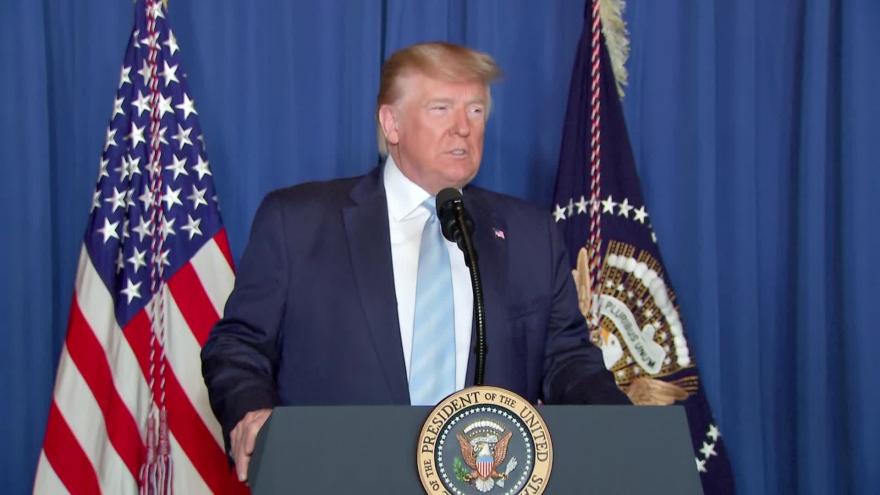 (CNN) -- Donald Trump's legal team filed its formal response Saturday evening to the Senate summons of the President, offering the first glimpse into what will ultimately be the White House's impeachment defense.

The response -- which calls the articles "constitutionally invalid" and says they are an attack on Americans -- argued both substantively, against the charges in the articles, and procedurally, against the House's impeachment inquiry.

"President Trump categorically and unequivocally denies each and every allegation in both articles of impeachment," the document reads.

The legal team argues that the first article of impeachment, abuse of power, "alleges no crime at all, let alone 'high crimes and Misdemeanors,' as required by the Constitution." The team cited Ukrainian President Volodymyr Zelensky's repeated denials that he felt any pressure from Trump as evidence that Trump did not abuse his power during the July 25 phone call.

The team pointed to the fact that the President released transcripts of both the July 25 phone call and an earlier one on April 21 to argue the conversations were "perfectly legal, completely appropriate and taken in furtherance of our national interest."

Defending Trump against the second article of impeachment, obstruction of Congress, the legal team claimed the administration "replied appropriately to these subpoenas and identified their constitutional defects."

The legal team highlighted the fact that House Democrats did not seek to enforce their subpoenas in court. Democrats have said they chose not to do so because they did not want the investigation to get bogged down in a months-long court battle when they felt they had collected sufficient evidence already.

The legal team cast the White House's refusal to cooperate with the impeachment inquiry as an effort to exercise its executive branch authority, and accused the House of attempting to "bypass our Constitution's system of checks and balances."

Meanwhile, House Democrats on Saturday released their argument for why President Donald Trump should be removed from office by the Senate in the upcoming impeachment trial, calling on the Senate to "eliminate the threat that the President poses to America's national security."

The House impeachment managers filed to the Senate their trial brief, a summary explaining why the House passed two articles of impeachment last month charging Trump with abuse of power and obstruction of Congress ahead of the trial arguments kicking off next week.

"President Trump's conduct is the Framers' worst nightmare," the managers wrote in the brief.

The House managers made their case directly to the senators who will act as jurors in the impeachment trial.

"History will judge each Senator's willingness to rise above partisan differences, view the facts honestly, and defend the Constitution," the managers wrote. "The outcome of these proceedings will determine whether generations to come will enjoy a safe and secure democracy in which the President is not a king, and in which no one, particularly the President, is above the law."

A source close to the White House who speaks to Donald Trump regularly said the President has appeared "distracted" by the impeachment trial that begins on Tuesday, telling people around him Friday night at Mar-a-Lago in Florida that he "can't understand why he is impeached."

"Why are they doing this to me," the source quoted Trump as saying repeatedly.

Trump has been telling associates and allies around him that he wanted a "high profile" legal team that can perform on television, the source said. It's simply who Trump is, the source continued, adding Trump loves having people who are on television working for him.

This in part may explain why Kenneth Starr and Alan Dershowitz were added to the legal team representing the President.

Starr, the hard-charging prosecutor whose work led to President Bill Clinton's impeachment, and Dershowitz, the constitutional lawyer, will join Robert Ray, Starr's successor at the Office of Independent Counsel during the Clinton administration, on the defense team, White House press secretary Stephanie Grisham said earlier in a statement.

The three seasoned lawyers are expected to join a legal team headed by Cipollone and Sekulow, who are still expected to deliver statements on the President's behalf on the Senate floor.