Trump's name will be added to stimulus checks 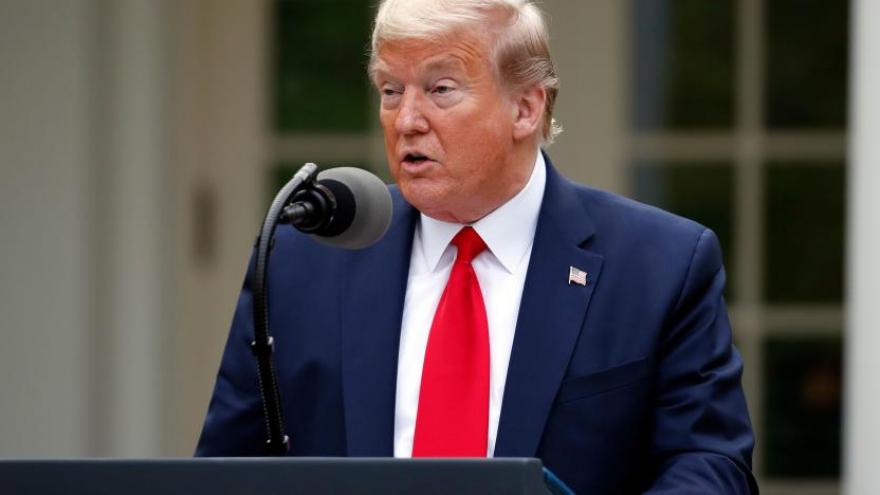 President Donald Trump speaks about the coronavirus in the Rose Garden of the White House, Tuesday, April 14, 2020, in Washington. (AP Photo/Alex Brandon)

(CNN) -- President Donald Trump's name will appear on checks sent to millions of Americans to combat the economic effects of the coronavirus in a last-minute Treasury Department order, a senior administration official confirmed to CNN on Tuesday.

Two senior Treasury officials told The Washington Post, which first reported the decision, that the move will probably set back the delivery date on the first set of paper checks -- potentially slowing a process that could already take up to 20 weeks. The Internal Revenue Service, however, insists that the move will not result in a delay.

"Thanks to hard work and long hours by dedicated IRS employees, these payments are going out on schedule, as planned, without delay, to the nation," Jodie Reynolds, an IRS spokeswoman, told CNN. "The IRS employees are delivering these payments in record time compared to previous stimulus efforts."

Citing senior agency officials, the Post reported that the words "President Donald J. Trump" would appear in the memo line on the left side of the checks -- marking the first time a president's written name is featured on an IRS check.

The President's name will be on all paper checks sent to people who are receiving stimulus payments. Many others are receiving the payments through direct deposit, if they have their bank information on file with the Treasury Department. Some of those direct deposit payments have already begun being deposited in bank accounts.

The news comes as the Treasury Department races to get coronavirus stimulus checks to tens of millions of taxpayers who haven't authorized direct deposits -- and could be waiting weeks for checks in the mail.

According to a House Ways and Means Committee memo, the paper checks will be issued at a rate of about 5 million per week, and it could take up to 20 weeks to issue them all. Individuals with the lowest incomes, based on adjusted gross income, will receive their checks first.

The President, however, is not authorized to sign Treasury payments -- a practice typically held by a government employee to protect the checks from politicization.

Trump had previously denied wanting to sign the checks during a briefing earlier this month.

The plan for Trump's name to appear on the checks had been underway for weeks, a Treasury official told the Post.

But the IRS' information technology team, working remotely, received the news earlier Tuesday -- and is now rushing to enact the change with a looming Thursday deadline to send the checks to be printed and issued, the paper reported.

The two officials warning of a delay told the Post that computer code changes and systems testing are now required to incorporate Trump's name.

This story has been updated to include comment from the IRS.

JuanCarlosDiaz 49 days ago
Dont be fooled people. This check isn't coming from him. Its our money, not from his pocket.
Like Reply Delete

Today 76° Times of sun and clouds