Trump's physician expects him to return to public events on Saturday 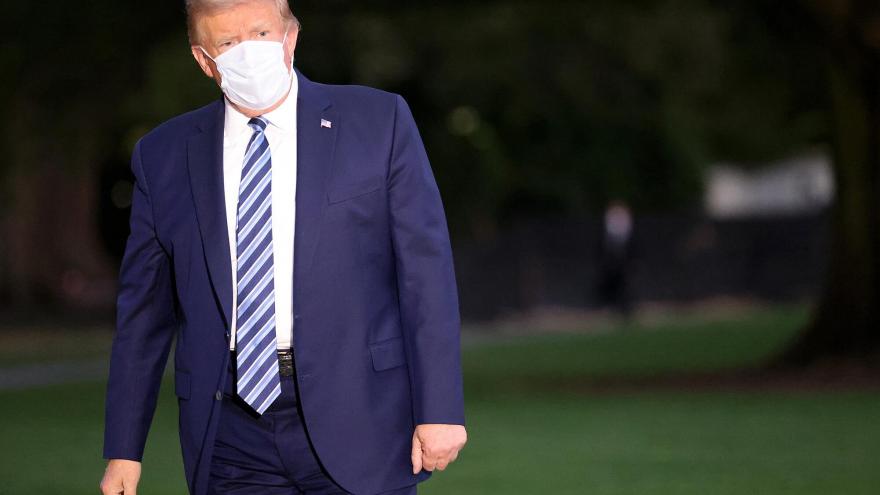 President Donald Trump is spinning up his own claims about his health, including that he is no longer contagious with coronavirus.

(CNN) -- President Donald Trump's physician said Thursday that the President "has completed his course of therapy for COVID-19," and he expects him to "return to public engagements" on Saturday. But there have still not been any independent sightings of Trump, who's been itching to return to the campaign trail with just a few weeks until Election Day.

"Saturday will be day 10 since Thursday's diagnosis, and based on the trajectory of advanced diagnostics the team has been conducting, I fully anticipate the President's safe return to public engagements at that time," Navy Cmdr. Dr. Sean Conley wrote in a memo released by the White House Thursday evening.

His latest memo, which still does not say when the President's last negative test occurred before his diagnosis, comes after Trump spun up his own claims about his health earlier in the day, including saying that he is no longer contagious with coronavirus, filling up the information void left by his doctors' lack of public candor.

During an interview with Fox News' Sean Hannity on Thursday night, Trump against refused to answer if he's tested negative for the virus or when his last negative test took place. Instead, he said that he wants to hold campaign rallies this weekend.

"I think I'm going to try doing a rally on Saturday night if we can, if we have enough time to put it together, but we want to do a rally in Florida, probably in Florida on Saturday night, might come back and do one in Pennsylvania on the following night," Trump said, saying he would take some tests on Friday, though it was not clear whether the President understood which tests he would be getting or what they would mean.

Trump told Fox Business Network's Maria Bartiromo that he doesn't believe he is contagious anymore and that he is ready to resume campaign rallies -- environments where participants previously have not been required to social distance or wear masks. The President also said he is immune from catching coronavirus again.

However, the US Centers for Disease Control and Prevention say people infected with coronavirus need to wait 10 days after their symptoms first appear before being around others and need to be 24 hours fever-free without taking fever-reducing medication.

By those guidelines, Trump should still be isolating, not campaigning. But just two days after being discharged from the hospital, he was working in the Oval Office.

Asked Thursday about criticism that he was returning to the White House while still is almost certainly shedding the virus, Trump said he didn't believe that was true.

But it's impossible for Trump to know based on how he feels whether he is shedding the virus.

Trump also claimed he now has immunity to the coronavirus. The science so far indicates that he may have some degree of protection, but it's not clear how strong that protection is or how long it lasts.

Trump sounded raspy in his Thursday morning interview, but he insisted he is better than normal and is prepared to resume his campaign schedule.

"I think I'm better ... to a point where I'd love to do a rally tonight. I wanted to do one last night," Trump told Bartiromo. "I feel perfect. There's nothing wrong."

Calling his illness "almost a gift from heaven," Trump again praised the drugs he received at Walter Reed National Military Medical Center, but said he couldn't have avoided contracting coronavirus.

"No matter how good the security, you're not going to protect yourself from this thing," he said, adding later: "You catch this thing. It's particles of dust."

The CDC says the virus can be transmitted through the air in some circumstances; the virus is not "particles of dust."

The President said he hadn't been tested recently, telling Bartiromo: "No, I'll be tested very soon, but I'm essentially very clean. They say it's over a period of six, seven days."

Trump also seemed to blame an event with Gold Star families for his infection, even though his White House Supreme Court nomination announcement has been labeled by some as a superspreader event and several attendees of that event have been infected.

"I got a lot of things doing ... when I want to say hello to Gold Star families ... I'm not going to be in a basement saying, 'Hey I can't see you as you traveled in from California and all the different places.' It's OK," Trump said.

The origin of Trump's coronavirus infection, of course, remain unclear.

Timothy Davis, president & CEO The Greatest GENERATIONS Foundation, said in a statement that all the Gold Star families who attended the White House event tested negative for coronavirus.