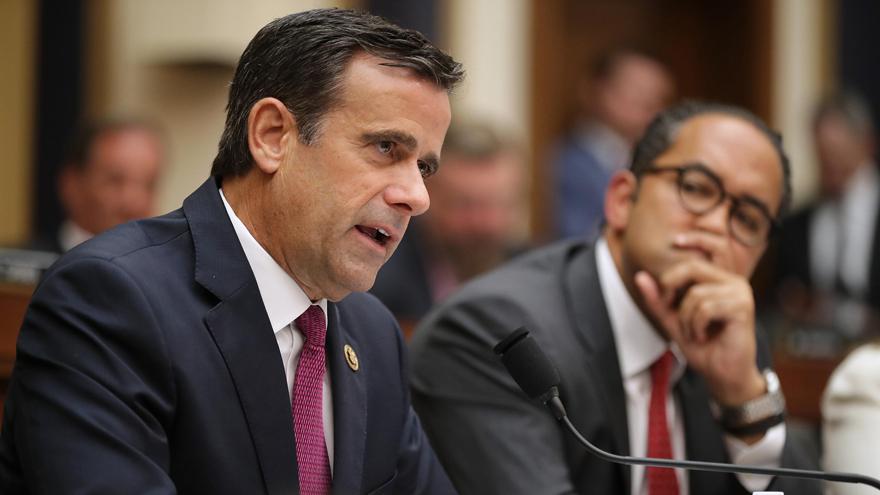 (CNN) -- President Donald Trump's pick to be director of national intelligence, Rep. John Ratcliffe, pledged to deliver unbiased intelligence to the President and Congress amid questions about the Texas Republican's loyalty to a President deeply skeptical of the intelligence community.

Ratcliffe is appearing before the Senate Intelligence Committee after he was selected by the President a second time to be the nation's spy chief. Ratcliffe withdrew from consideration when he was first tapped for the role last summer amid concerns from even some Republicans about exaggerations to his national security resume, but Trump picked him again in February for the role.

"Let me be very clear. Regardless of what anyone wants our intelligence to reflect, the intelligence I will provide, if confirmed, will not be impacted or altered as a result of outside influence. Above all, my fidelity and loyalty will always be with the Constitution and the rule of law, and my actions as DNI will reflect that commitment," Ratcliffe said in his opening statement.

Ratcliffe appears to have the support he needs from Republicans who were skeptical the first time he was picked, but Democrats are sure to press him on his ability to be independent from Trump when the President has expressed an open distrust of the intelligence community and refused to agree with the assessment on Russian election interference.

The hearing comes amid questions about Trump's claims of intelligence on the origins of the coronavirus outbreak in Wuhan, China, and the removal of top intelligence officials earlier this year, including former intelligence community inspector general Michael Atkinson and then-acting Director of National Intelligence Joseph Maguire.

Ratcliffe would be replacing US Ambassador to Germany Richard Grenell, a fierce loyalist to the President who was named acting director of national intelligence in February following Maguire's ouster. Grenell has butted heads with Congress since taking over the role.

Virginia Sen. Mark Warner, the committee's top Democrat, said he has concerns about what he described as Ratcliffe's "inexperience, partisanship, and past statements that seemed to embellish" his record.

"Some have suggested that your main qualification for confirmation to this post is that you are not Ambassador Grenell. But frankly, that is not enough," Warner said in his opening statement. "Before we put the Senate's stamp of approval and confirm a nominee to this critical position, senators must demand the qualities that the Senate specified when it passed the law creating the ODNI ... We must expect and demand professionalism, a nonpartisan commitment to the truth, and a rock-solid dedication to defending those who defend us every day: the professional women and men of the nation's intelligence agencies."

Ratcliffe is not particularly close to Trump, and they did not meet on-on-one until last year, according to a source close to the confirmation process. Ratcliffe was, however, a vocal defender of the President during the impeachment proceedings, a performance Trump raved about before picking him a second time.

Democrats say they will press Ratcliffe on the politicization of the intelligence community and his willingness to provide intelligence to the President that he doesn't want to hear. They're also likely to delve into apparent exaggerations to Ratcliffe's resume prosecuting terrorism cases in the US Attorney's Office for the Eastern District of Texas, which emerged following his selection last year.

Ratcliffe's confirmation hearing is the first Senate hearing being held since the Senate reconvened this week in a new, socially distant world at the US Capitol. The hearing will be closed to the public, and the number of Senate aides and reporters will be curtailed. Senators rotated into the hearing in small groups for half-hour blocks in order to limit the number in the room at one time.

A nominee's family members are nearly always in attendance for confirmation hearings, but Ratcliffe's were not present on Tuesday. Ratcliffe was supposed to be introduced by former Attorney General in the George W. Bush administration, John Ashcroft. Instead, Senate Intelligence member Sen. John Cornyn, a Texas Republican, read excerpts of Ashcroft's planned statement.

Ahead of the hearing, the Justice Department provided the committee with a document stating that Ratcliffe was assigned 34 cases labeled terrorism or national security critical infrastructure, according to the source close to the confirmation process. But a Democratic source close to the committee said the document didn't include specific cases or show that Ratcliffe had tried any of the cases included.

Senate Intelligence Committee Chairman Richard Burr, a North Carolina Republican who was cool to Ratcliffe's nomination last year, said after Ratcliffe was nominated a second time this year that he would support the pick. And Republican Sen. Susan Collins of Maine said in a statement last week that she was backing Ratcliffe after meeting with him, saying he had the "experience to meet the statutory standard to fill the position."

The director of national intelligence leads the 17 agencies that make up the intelligence community. The role and the Office of the Director of National Intelligence were created in the aftermath of the 9/11 terrorist attacks.

Ratcliffe has been prepping for Tuesday's confirmation hearing at ODNI and has met with agency heads to get their perspective.

There are a host of issues Ratcliffe is likely to field questions about, from Russian election interference to the intelligence on the coronavirus outbreak to the restricting of the nation's intelligence agencies and the office he would lead if confirmed.

Trump's recent touting of intelligence on the exact origins of the coronavirus in China -- as well as his attempt to rebut press reports about when he was given intelligence on the outbreak earlier this year -- are both likely to be key topics at Tuesday's hearing.

Ratcliffe said if he's confirmed, the intelligence community would be "laser-focused" on coronavirus.

"The immediate focus of the IC must be directed to the geopolitical and economic impact of the coronavirus pandemic, as well as its origins," Ratcliffe said Tuesday. "The American people deserve answers. And if confirmed, I pledge the IC will remain laser-focused on providing them."

This story has been updated with additional developments and will update throughout the day Tuesday.