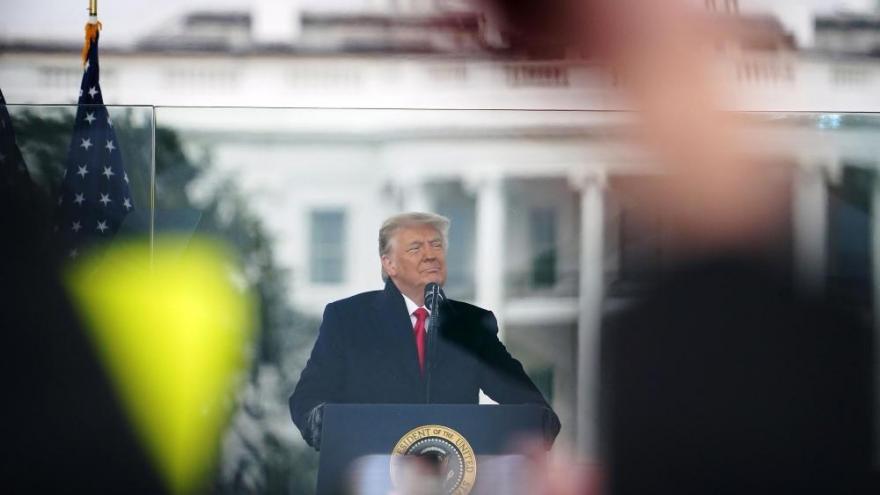 Donald Trump speaks to supporters from The Ellipse near the White House on January 6, 2021, in Washington, DC.

(CNN) -- The Senate voted Tuesday that the second impeachment trial of former President Donald Trump is constitutional after the House impeachment managers made an emotionally compelling case showing how rioters violently breached the US Capitol and attacked police officers last month, invoking Trump's name as they tried to disrupt the certification of the November election.

The 56 to 44 vote, however, showed why there's little path for the House managers to obtain the two-thirds majority needed for conviction, as all but six Republican senators voted for a second time that the trial was unconstitutional because Trump is no longer president -- even while Republican senators praised the House managers' presentation and panned the one made by Trump's lawyers.

Sen. Bill Cassidy, a Louisiana Republican, was the only senator to vote differently than a procedural vote last month on the constitutionality of the trial. Cassidy told CNN on Tuesday after the managers' presentation that it was a "very good opening" and they had made strong arguments.

"Anyone who listened to those arguments would recognize that the House managers were focused, relied upon and trusted upon the opinion of legal scholars," Cassidy said after the vote. "Anyone who listened to President Trump's legal team saw they were unfocused, they attempted to avoid the issue. And they talked about everything but the issue at hand."

Rep. Jamie Raskin of Maryland, the lead impeachment manager, opened his presentation with a video showing disturbing footage of how protesters overran police and ransacked the Capitol, forcing lawmakers in the House and Senate to flee their chambers. The video was spliced with Trump's speech on January 6 ahead of the riots, showing the crowd's reaction to Trump as he urged them to head to the Capitol.

The video was an early sign about how the House impeachment managers intend to confront senators with the violent events of the riot and charge that Trump is culpable for inciting the insurrectionists that attacked the Capitol and placed their lives in danger. The opening session of the trial was a debate on the constitutionality of the trial itself, but Democrats quickly turned their attention to the harrowing attack on the Capitol.

The Democrats' 13-minute video concluded with Trump's deleted tweet on January 6, saying that "these are the things and events that happen when a sacred landslide election victory is so unceremoniously & viciously stripped away."

Senators on both sides turned away from the video from time to time as it played on monitors, the yelling of the mob echoing in the chamber that rioters had breached. When the video ended, there was silence in the chamber before Raskin spoke again.

"If that's not an impeachable offense, then there's no such thing," Raskin argued.

Trump's team has contended that the impeachment trial itself is unconstitutional, while arguing that Trump did not incite the rioters and that his speech about the election was protected by the First Amendment.

The initial presentation from the defense team offered a Jekyll-and-Hyde-esque response to the impeachment charge, with Trump attorney Bruce Castor praising the managers for a presentation that was "well done" and attorney David Schoen following by slamming Democrats for trying to tear apart the country.

Castor opened Trump's defense with a meandering presentation that included a lengthy praise of the Senate, including his home state Pennsylvania senators Republican Pat Toomey and Democrat Bob Casey, while also arguing that the Senate should not be holding the impeachment trial. Castor warned that a second impeachment trial in 13 months would "open the floodgates" to future impeachments, even making the unfounded rhetorically suggestion that former Obama administration Attorney General Eric Holder could be impeached.

"We can't possibly be suggesting we punish people for political speech in this country. If people go and commit lawless acts of their beliefs, and they cross the line, they should be locked up," Castor said. "If we go down the road my very worthy adversary here Mr. Raskin asks you to go down, the floodgates will open."

Senate Republicans were critical of Castor's presentation, saying they failed to grasp what point he was trying to make.

"I was really stunned at the first attorney who presented for former President Trump," said Sen. Lisa Murkowski of Alaska, one of the six Republicans who voted the trial was constitutional. "I couldn't figure out where he was going, spent 45 minutes going somewhere, but I don't think he helped with us better understanding where he was coming from on the constitutionality of this."

Even senators who voted against the managers raised criticisms. "I don't think the lawyers did the most effective job," said Texas GOP Sen. Ted Cruz.

"I thought the President's lawyer, the first lawyer, just rambled on and on and on and didn't really address the constitutional argument," said Sen. John Cornyn, also a Texas Republican. "Finally the second lawyer got around to it, and, I thought, did an effective job, but I've seen a lot of lawyers and a lot of arguments and that was ... not one of the finest I've seen."

Schoen was supposed to present first, not Castor, according to two people familiar with the plan. But Castor told the Senate that Trump's legal team "changed what we were going to do on account that we thought that the House managers' presentation was well done."

After Castor deferred to Schoen, the tone of the defense team changed starkly. Schoen charged that Democrats were using impeachment as a political "blood sport" to try to keep Trump from running for office again, accusing Democrats of trying to disenfranchise pro-Trump voters. Schoen played a video montage showing Democrats saying they wanted to impeach Trump back in 2017, before ticking through the arguments Trump's side has made that the House failed to give Trump any due process and that the trial of a former president was unconstitutional.

"They're willing to sacrifice our national character to advance their hatred and their fear that one day they might not be the party in power," Schoen said of Democrats.

Trump was unhappy with Castor's opening argument, according to two people familiar with his reaction.

'This cannot be our future'

The Democrats argued there was clear precedent for the impeachment trial when the acts Trump was impeached for happened while he was in office. After their video opening, Raskin and Democratic managers Reps. Joe Neguse of Colorado and David Cicilline of Rhode Island walked through the history of impeachment and how it was written in the Constitution, arguing there was sufficient precedent to hold a trial for Trump. Raskin used a series of writings to argue the Framers indeed intended impeachment to be a tool that could be used even after an official left office. Raskin said that in fact, one of the Founders' key concerns was protecting against politicians who came into office as "demagogues" and left as "tyrants."

"President Trump may not know a lot about the framers, but they certainly knew a lot about him," Raskin said. "Given the framers' intense focus on dangers to elections and the peaceful transfer of power, it is inconceivable they designed impeachment to be a dead letter in a president's final days in office."

The Democrats argued that Trump's team was trying to create a "January exception" that would create a loophole for presidents to commit impeachable offenses just before leaving office.

"Presidents can't inflame insurrection in their final weeks and then walk away like nothing happened," Neguse said. "And yet that is the rule that President Trump asks you to adopt."

Raskin closed the Democrats' opening argument with a personal plea to senators, choking up as he described how his daughter was in the Capitol when the riot unfolded, one day after his family had buried his 25-year-old son. When he was reunited with his daughter, who had been in hiding off the floor, Raskin apologized, saying he promised it wouldn't be like this the next time she visited. His daughter responded she didn't want to come back.

"Senators, this cannot be our future," Raskin said.

The Senate plans to continue the trial every day until it concludes, including the weekend, after an initial planned break for the Shabbat holiday on Friday evening was scrapped. Democratic senators came away from a conference call Tuesday morning with Senate Majority Leader Chuck Schumer under the belief that a final vote on conviction could occur Sunday or Monday if there are no witnesses, according to multiple senators on the call. Republican senators discussed the possibility the trial could wrap up by Saturday evening if there are no witnesses, according to two senators.

House managers have not yet requested witnesses -- beyond a request for Trump himself last week that the defense team swiftly rejected -- but are preserving that option in case they need witnesses' testimony to rebut an argument made by the Trump team, which would extend the length of the trial into at least next week. The timing is also a bit uncertain because it's unclear how much time the Trump team will use, though they're not expected to use their full 16 hours.

Senior House aides on the impeachment team argued Tuesday that the Senate's vote that the trial is constitutional should settle the issue like any other trial motion. But while Democrats won the vote Tuesday, the constitutionality question looms over the entirety of the trial, because Republicans have coalesced around the argument as a reason to acquit Trump. Conviction requires a two-thirds majority, or at least 17 Republican senators, to join all members of the Democratic caucus.

Sen. Roger Wicker, a Mississippi Republican, told CNN Tuesday that "Democrats sent a better team" this time, calling them "very eloquent." But he said "no," nothing had changed his mind on the constitutionality question.

"I think the constitutional defects of this -- both in the House and the Senate are overwhelming," said Sen. John Kennedy, a Louisiana Republican.

A different kind of trial

Unlike the last trial, senators will not be required to sit at their desks throughout the proceedings, due to the Covid-19 pandemic. They will be able to instead watch from the gallery above the Senate chamber or in a room off the floor that will show the trial on television. Masks will not be required on the floor, unlike on the House floor, but the expectation is the managers and Trump's lawyers will wear masks unless they are speaking.

As the trial got underway, all senators were wearing masks except Republican Sen. Rand Paul of Kentucky, who has long argued that he's immune after having Covid early last year. It's still unclear if those who have had coronavirus remain immune to the virus. Other senators, however, who have had coronavirus or been vaccinated for Covid-19, still wear masks.

Senators are not allowed to speak during the trial as jurors.

After Tuesday's debate and vote, the House managers will have 16 hours over two days to make their presentation beginning Wednesday, followed by up to two days for Trump's lawyers, though they may not use all of their time. Senators will then have four hours to ask questions submitted in writing to both sides, and the Senate could debate and vote on whether to subpoena witnesses.