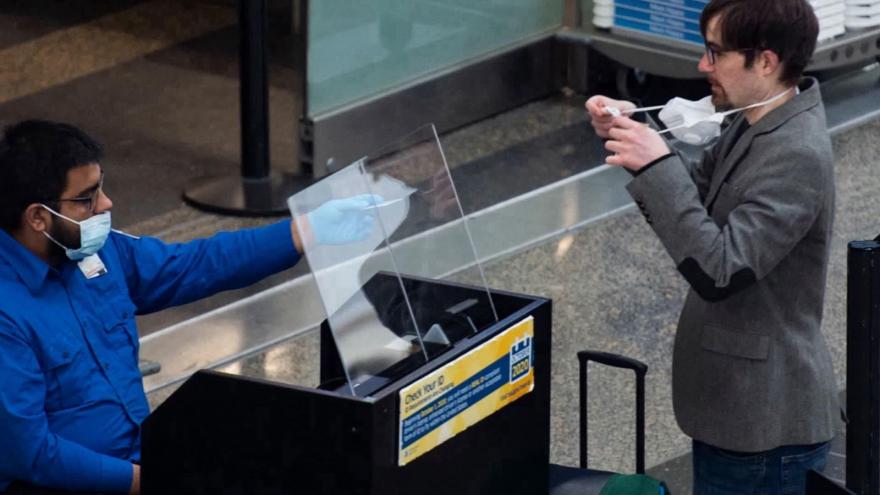 The Transportation Security Administration has implemented a number of procedure changes to better protect employees and passengers against the coronavirus following a recent whistleblower complaint that raised concerns about how the agency was responding to the pandemic.

(CNN) -- The Transportation Security Administration has implemented a number of procedure changes to better protect employees and passengers against the coronavirus following a recent whistleblower complaint that raised concerns about how the agency was responding to the pandemic.

The whistleblower, TSA federal security director Jay Brainard, who oversees Kansas airports for the agency, first raised concerns about how the TSA was handling the pandemic in a June whistleblower report filed with the Office of Special Counsel.

Brainard said on Wednesday that the agency made procedure changes on the eve of the July Fourth holiday after he raised concerns to Administrator David Pekoske, who he met with in late June.

The changes require TSA officers to clean their gloves -- or change to a new pair of gloves -- between interactions with passengers, such as a pat down or ID check, Brainard said. That change is intended to prevent cross-contamination between passengers. The TSA has also implemented other measures to prevent cross-contamination, such as encouraging passengers to put loose items in their bags rather than in bins.

Another change requires officers to wear face shields in addition to face masks. Brainard said that those two protections do a good job shielding officers from a potentially contagious passenger. Officers are offered, but not required, to wear N-95 masks, and may instead wear surgical-type masks, he added.

The agency is also standardizing the practice of putting up transparent screens at stations where passengers and officers interact without social distancing, Brainard said. The positions include the ID checking station, another station prior to the x-ray machine, and at the table where bags receive further inspection. Some airports and regions, such as Brainard's, had begun this practice months ago, he said.

Over the Independence Day weekend, the TSA saw the most passengers it has seen since the pandemic hit the US. To date, 997 TSA employees have tested positive for the virus and six have died after contracting it.

The agency did not dispute that procedure changes have been made, and acknowledged the meeting between Brainard and Pekoske. Spokesman R. Carter Langston said in a statement that "internal feedback comes from many different sources and we listen to all of them."

The meeting and its role in the changes were reported earlier by The Washington Post.

A letter to the agency's Office of Special Counsel from Brainard's lawyer says his complaint "demonstrates a substantial likelihood of gross mismanagement, a substantial and specific danger to public health and safety, and abuse of authority."

"He charges that TSA has failed to provide a centralized, proactive response to the pandemic through adequate guidance, authority to enforce public health controls and resources such as personal protective equipment (PPE), authority and basic sanitation controls to prevent unnecessary spread of the COVID-19 virus to airport passengers," the letter reads.

The TSA outlined some of the changes in a June 30 announcement, and internally directed procedure changes that week.

Langston said Pekoske has held weekly employee town halls and pointed out a series of procedure changes in May and June to adapt to the pandemic.

"Most importantly, we take the responsibility to protect both passengers and our employees from COVID-19 very seriously," he said in a statement. "Internally, we are consistently communicating about our COVID-19 mitigation efforts to help contain community spread of the COVID-19 virus."

Brainard had previously filed a whistleblower complaint in December 2019 alleging that top TSA officials have prioritized speed over security by reducing the sensitivity of metal detectors, disabling technology on some X-ray machines, and ordering policy changes that result in fewer pat-downs, among other things.