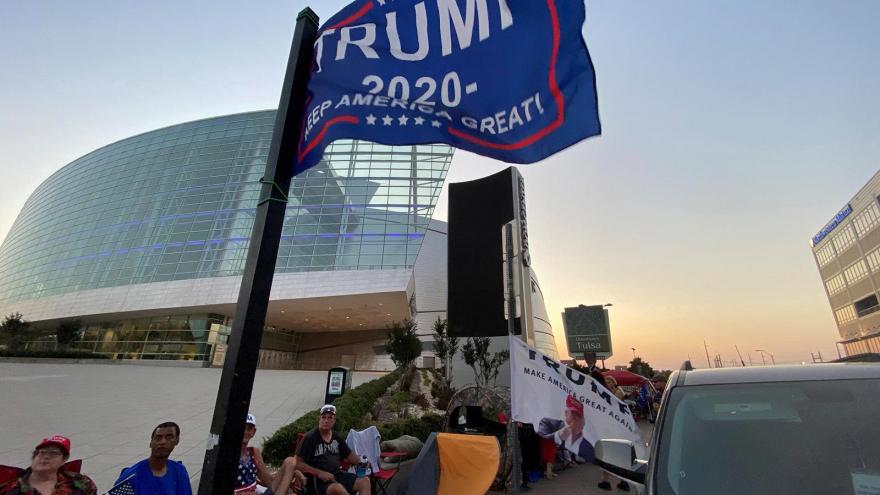 (CNN) -- The mayor of Tulsa, Oklahoma, has rescinded a curfew for the area around President Donald Trump's rally in the city that had been imposed ahead of the event.

"Last night, I enacted a curfew at the request of Tulsa Police Chief Wendell Franklin, following consultation with the United States Secret Service based on intelligence they had received," Republican Mayor G.T. Bynum said in a statement Friday. "Today, we were told the curfew is no longer necessary so I am rescinding it."

Trump thanked Bynum on Twitter for revoking the curfew, stating that the mayor had notified him of the change during a recent conversation.

"I just spoke to the highly respected Mayor of Tulsa, G.T. Bynum, who informed me there will be no curfew tonight or tomorrow for our many supporters attending the #MAGA Rally," Trump tweeted Friday afternoon. "Enjoy yourselves - thank you to Mayor Bynum! @gtbynum."

Bynum had issued an executive order Thursday establishing the curfew in parts of the city's downtown area, saying more than 100,000 people were expected in the vicinity of the event.

The order also said that "individuals from organized groups who have been involved in destructive and violent behavior in other States are planning to travel to the City of Tulsa for purposes of causing unrest in and around the rally."

The curfew began Thursday, 10 p.m. local time and was slated to stay in effect until Saturday, 6 a.m. Then, after the rally, a continued curfew was scheduled to be in place until 6 a.m on Sunday.

"We understand that many people are unaware that a curfew will be in place and barricades are still in the process of being setup," the Tulsa Police Department said Thursday. "If we find anyone in violation of the Executive Order this evening, we will request that they leave the area based on the curfew. If people refuse to leave the area, they may be cited or arrested."

Earlier this week, rally-goers enthusiastically awaiting the President's arrival have formed a line and camped outside the rally's venue, the Bank of Oklahoma Center. The mayor's curfew appeared to extend to the area around the BOK Center. CNN has reached out to the mayor's office and Tulsa police.

The rally in Tulsa is Trump's first major campaign event since the coronavirus pandemic shut down parts of the country.

Oklahoma recently reported its largest single day increase in Covid-19 cases since the start of the pandemic.

The Trump campaign said it plans to provide hand sanitizer, temperature checks and masks to attendees, though wearing a mask won't be required.

This story has been updated to reflect that the curfew has been rescinded.