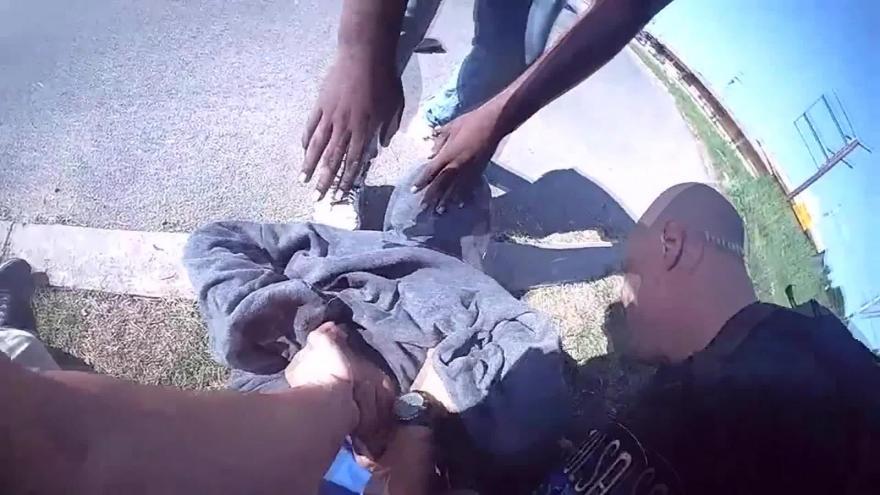 Body camera footage was released from two Tulsa police officers who arrested a black teenager and handcuffed a second for jaywalking.

The videos were released in response to social media messages from the community about the arrest, police said. The videos appear to have been blurred and redacted by police to conceal the teenagers' identities.

Tulsa Mayor G.T. Bynum said in a statement Wednesday that the incident is under investigation.

"I want every kid in Tulsa to feel safe to walk down the street in their neighborhood. No Tulsa kid should have to fear being tackled and cuffed for walking down the street. I viewed that footage last night more as a parent than a mayor," he said.

"I know the officers in that unit focus on removal of illegal guns from the streets, but the goal of that work should be that families feel safe in their neighborhood. This instance accomplished the opposite."

In the videos of the June 4 incident, the two teenagers can be seen walking down the middle of a road together before they are approached by an officer on foot and a second in a squad car.

Once the officers reach the teenagers, one officer can then be seen forcing a teenager onto his stomach to handcuff him, while holding him down with his arms and knees. The second teenager is also handcuffed, but doesn't struggle and remains standing.

'You want to see me in jail or dead'

The teenagers can both be heard repeatedly asking the officers why they are being detained and handcuffed and the teenager being held accuses the officers of targeting him be because he is black, saying "you want to see me in jail or dead."

One of the arresting officers responds by telling the teens they were breaking the law by jaywalking.

As the officers then unsuccessfully try to place the struggling teenager in the front seat of their squad car, the teen yells, "Call my momma!," threatening to beat the officer holding him if he gets out of his handcuffs.

The second teenager can be heard repeatedly telling his companion, "Chill out, bro. It's not worth it."

A caged squad car arrives and an officer shoves the teenager who continues to struggle, into the vehicle.

In the course of the arrest, a black man across the street starts to question the officers' treatment of the teenagers, when one officer can be heard telling him to get out of the street or be arrested as well.

While the first teenagers remains inside the caged squad car, the second teenager is eventually released from his handcuffs and instructed on how to avoid jaywalking going forward.

Tulsa police says the department's Internal Affairs Unit is investigating the first teenager's arrest and said it is unable to comment on the arrest pending that investigation.

The footage was released as a Tulsa Police major faces sharp criticism from city officials for denying the existence of systemic racism and saying that police shoot African Americans "less than we probably ought to be based on the crimes."

"...You're going to hear these little buzz words, it's going to be vague. Nobody's going to define it," he said. "That's why there's this systematic racism, all vague. They won't, they can't give you specifics, because I said as I said earlier, it doesn't exist," he said during the podcast.

"When you take the total number of people shot -- 96% of people shot by cops who had a weapon and were threatening that weapon. Okay, so 96%, when you take that number, it's about 24% African American and you know the rest mixed races and that's why you get this meme of blacks are shot two times, two and a half times more," he said.

"So when you look at law enforcement contacts, if a certain group is committing more crimes, more violent crimes, and law enforcement's having to come in more contact with them, then that number is gonna be higher," Yates said. "Who in the world in their right mind would think that our shootings should be right along the US Census lines? That's insanity. Right? But everybody's just buying off on this."

Yates said the research shows "we're shooting African Americans about 24% less than we probably ought to be based on the crimes being committed."

Speaking to CNN, Yates said that he meant that systematic racism in policing doesn't exist, but he said he recognized racism does exist and calls it our "sin nature."

He also said that he stands by his comments and added he was just quoting research.

Tulsa Police Chief Wendell Franklin said he and the police department do not "endorse, condone, or support" Yates's comments, and he said Yates is assigned to the Records Division, which is primarily staffed with civilians.

"We want to make it clear the statements made by Yates are not a part of any curriculum or training provided by the Department. Yates's comments do not align with the mission, values or policies of the Tulsa Police Department," he said.

"I want to believe he didn't intend to say what he did, but what he did say goes against everything we are trying to achieve in community policing," Mayor Bynum said.

"The United States in effect operates two distinct criminal justice systems: one for wealthy people and another for poor people and people of color," The Sentencing Project writes.

The end result of what author Michelle Alexander calls the "criminal injustice system" is that black Americans make up a third of the US prison population despite only making up around an eighth of the country's total population.