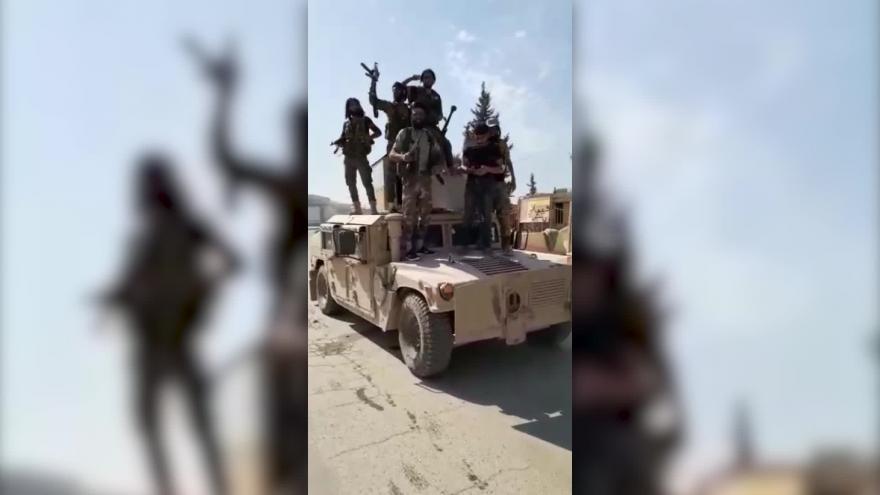 (CNN) -- Turkish forces took control of their first town in northern Syria on Saturday, the defense ministry said, as the country's offensive intensifies.

The Turkish military tweeted that it had seized Ras al-Ain on the border "as a result of ongoing successful operations within the scope of the Peace Spring Operation."

But the Kurdish-led Syrian Democratic Forces (SDF) disputed this, with commander Mervan Qamishlo telling Reuters that the group had conducted a "tactical retreat" from one neighborhood of Ras Al Ain, before "very fierce clashes" restarted.

It comes days after Turkish President Recep Tayyip Erdogan launched the incursion into Syria to drive Kurdish forces -- a key US ally against ISIS -- away from the border and to use the area to resettle around 2 million Syrian refugees.

An estimated 100,000 people have been displaced since the beginning of the military offensive, according to the United Nations on Friday.

There has been growing concerns since the beginning of the operation that Turkey might be pushing to gain more control of the nation, according to a US official familiar with the situation in Syria.

The official told CNN that Turkey was seeking to control an area stretching from the Iraq border into northwest Syria -- an area inhabited mostly by Kurds and other minorities.

The road to besieged Ras al-Ain became almost deserted about six miles out out. Motorcycles and the occasional pickup truck raced past, and the villages appeared deserted. A drone could be heard hovering overhead.

Down the road, Tal Tamr, the next town, was abuzz with those who had fled down there, its markets bustling and SDF forces on the streets.

There are also concerns over what the incursion could do to stability in the region, as well as the fight against ISIS.

The SDF has been a key US partner in the fight against ISIS, but shortly after Turkey launched its operation, the SDF suspended its counter-terrorist operations against the group to focus on the Turkish offensive.

A commander for the Kurdish forces that guard Al-Hol camp told CNN Friday that ISIS families had already attempted to escape from the camp.

Qamishlo said there was "civil disobedience" in the camp on Friday, when people tried to raze tents and attack security personnel. Video footage showed what appeared to be chaotic scenes inside the camp, which houses roughly 70,000 displaced people from ISIS-controlled areas, including relatives of ISIS members.

A senior State Department official told CNN Friday that the Turkish operation "undercuts" US efforts but did not go so far as to criticize President Donald Trump.

"It undercuts our efforts to defeat ISIS by drawing these SDF forces away from the battle in the south and frankly forcing our troops to focus on the military aspects of the invasion," the official said.

For now, according to a US defense official, US troops are still co-located with SDF elsewhere in Syria and remain in other places such as Manbij. While they are still "working" with the SDF, counter-ISIS operations have been suspended so they aren't conducting operations together, according to the same official.

Also on Friday the Pentagon said US troops in Syria "came under artillery fire from Turkish positions" and demanded that Turkey halt all operations that could require the US to take "immediate defensive action."

"US troops in the vicinity of Kobani came under artillery fire from Turkish positions at approximately 9 p.m. local Oct. 11," Navy Capt. Brook DeWalt, a Pentagon spokesman, said in a statement.

"The explosion occurred within a few hundred meters of a location outside the Security Mechanism zone and in an area known by the Turks to have U.S. forces present."

The Pentagon's confirmation stands in stark contrast with the Turkish Defense Ministry's comments on the incident. The ministry issued a statement late Friday night denying that its forces had fired on US troops in Syria and instead said Turkish troops were targeting Kurdish fighters nearby.