Turtle crashes through a car's windshield, sending a woman to the hospital 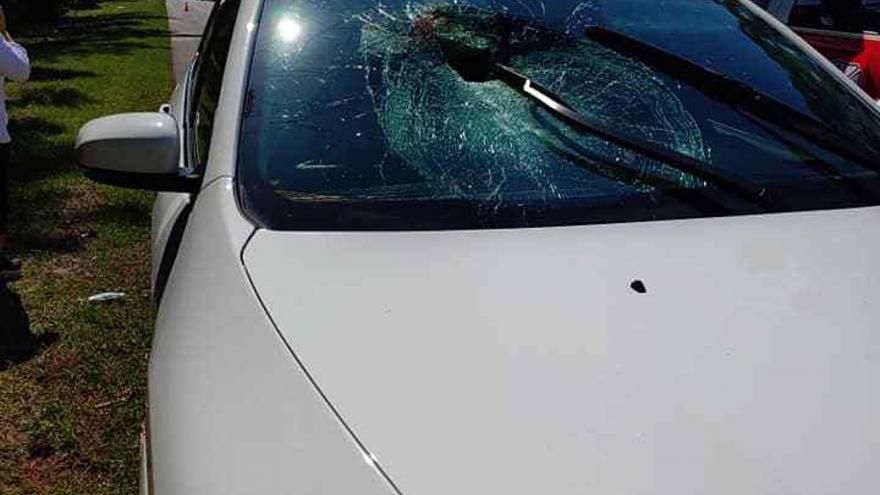 A turtle crashed through the windshield of a car on Interstate 95 near Port Orange, Florida. - Chuck Paul

(CNN) -- A turtle crashed through a car's windshield in a story that seems on-brand with the weird news that comes out of Florida. What may surprise you though, is this bizarre accident has happened around here before.

A 71-year-old woman was riding with her daughter on Interstate 95 near Port Orange, Florida, on Wednesday when a turtle smashed through the windshield, hitting the elderly woman in the head, according to the Daytona Beach News-Journal.

"She's got so much blood coming out of her head," the daughter is heard saying in a 911 call obtained by CNN affiliate WKMG.

The daughter didn't realize it was a turtle that came through the window, suggesting to the dispatcher it may have been a piece of concrete.

"An actual turtle?" the daughter exclaimed after another driver who stopped to help said that's what it was.

While she had to go to the hospital, the woman was OK, the Daytona Beach News-Journal said. The turtle survived too, only suffering a few scratches on its shell.

It's not clear how the turtle became airborne, but it may have gotten knocked in the air by another vehicle, which has happened in the past.

In 2016, a woman suffered a small bump on the head and minor cuts after a vehicle clipped a turtle on the highway, sending it through her car's windshield. This was on Interstate 4 near Deltona. That turtle also survived the crash.

A similar situation happened in Georgia too. Last year, a turtle nearly hit a passenger in the face after it crashed through a woman's windshield in Savannah.