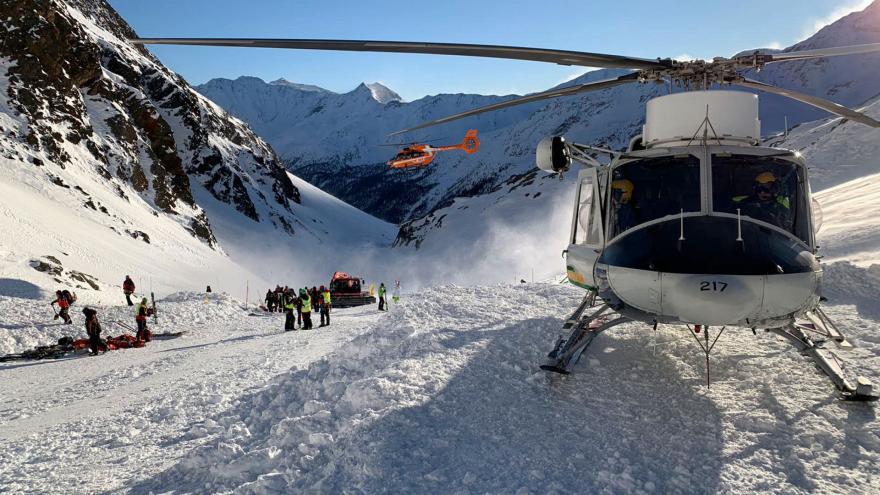 (CNN) -- At least four people are dead after two avalanches struck the Italian Alps over the weekend.

On Sunday, a 28-year-old died after an avalanche in the Brenta Dolomite mountains at an altitude of 2,700 meters (8,860 feet) around 11 a.m. local time, the Carabinieri told CNN.

The man had been making his way up a gully with three others -- all expert off-piste alpine skiers from the Dolomite area --- when the avalanche hit. A second skier caught up in the incident was injured and transported to a hospital in Trento.

Officials have not released the names of the four individuals.

Earlier on Saturday, a woman and two children died after an avalanche struck a ski slope at the Val Senales glacier in South Tyrol, a province in northern Italy near the Austrian border, a Guardia di Finanza (Finance Police) source told CNN.

That avalanche happened around midday on Saturday. Officials from the Finance Police, Alpine rescue and Carabinieri attended the scene, with assistance from three helicopters and dog units specialized in avalanche search and rescue.

The bodies of a 35-year-old woman and a 7-year-old girl were found buried under the snow, according to a finance police source, who cannot be named as they did not have permission to speak to the media. Another 7-year-old girl died while en route to Santa Chiara hospital in Trento by helicopter, the source added. All three victims -- who are believed to be German -- were regular skiers.

The source also said that two other skiers received minor injuries while two more were rescued from under the snow.

Magistrates in Trento have opened an investigation and were headed to the accident scene on Sunday morning. They will survey the site and assess if appropriate security measures were in place on the ski slopes.

Officials have not excluded the possibility the avalanche was caused by off-piste skiers.