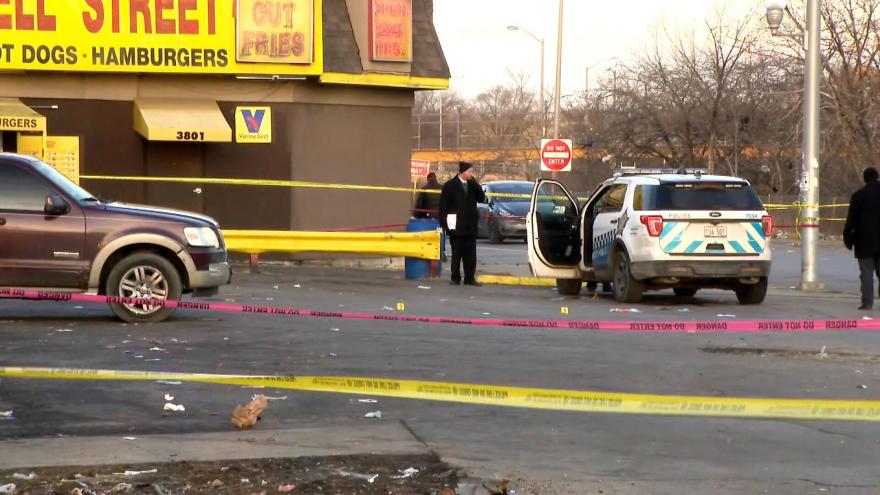 (CNN) -- Two Chicago police officers were shot while waiting to order food after a man who was waiting in line allegedly fired at them, authorities said Friday.

Chicago Police Superintendent David Brown said the two officers working the overnight shift stopped at a hot dog stand around 3:30 a.m. One officer remained in the squad vehicle while the other went to wait in line.

Brown said a man at the front of the line dropped a gun from his waistband while reaching in his pocket to retrieve money.

The man picked up the gun and without warning, started shooting. He struck the officer in line, and then fired three shots into the squad car before fleeing, Brown said.

According to Brown, nearby officers responded and were able to capture the shooter and recover the weapon.

Brown said there is video of the shooting but did not say when it will be released to the public. He did not identify the shooter or the officers.

It is not clear if the suspect has been charged.

One of the officers has been released from the hospital, Brown said, and the other officer will remain hospitalized for several days.

"This is a stark reminder of at every hour of every day the men and women this department put their lives on the line," Brown said. "And it's another call to action to all of us to get guns off the streets of Chicago and out of the hands of individuals who should not have them. Acts of senseless violence cannot be the norm in our city."

"I am relieved to hear that both officers are in stable condition with non-life threatening injuries, and that a suspect has been safely apprehended," Lightfoot said in the statement.