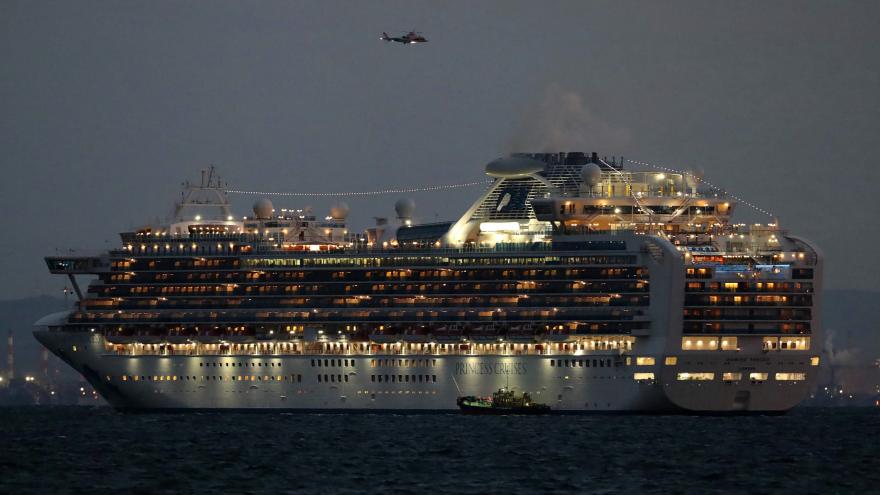 (CNN) -- More than 6,000 people are being quarantined on two cruise ships off Hong Kong and Japan amid concerns passengers and crew were inadvertently exposed to the Wuhan coronavirus by infected passengers.

People aboard both ships are being given health screenings, and those with suspicious symptoms are being tested for the virus that has quickly spread throughout mainland China and beyond.

Concerns about potential infection among thousands of passengers at sea exposes the vulnerability of cruise ships to viral illnesses, like the coronavirus. The threat alsoraises questions about thedurability of Asia's booming leisure cruise industry, which counts the elderly as among its most loyal customers.

Older people are especially susceptible to the Wuhan coronavirus -- China's National Health Commission said Tuesday that 80% of all fatalities in mainland China were over the age of 60.

The Diamond Princess is anchored off the coast of Yokohama, near Tokyo, with 1,045 crew and 2,666 passengers -- including 428 Americans -- on board. The second ship, the World Dream, is docked at Hong Kong's Kai Tak Cruise Terminal with more than 3,600 passengers and crew members on board, the city's Department of Health said Wednesday.

As of Wednesday evening, 33 people working on board the ship claimed to have developed symptoms of upper respiratory tract infections. Three had fevers and were sent to the hospital "for isolation and management."

Tests for 32 of the crew members came back negative, and the last one is still pending, authorities said.

The coronavirus outbreak has killed more than 560 people and infected over 28,000 -- the vast majority in China. Outside mainland China, it has spread to over 25 countries and territories, and killed two people.

Cruise companies worldwide have vowed to enact extra measures to protect their customers from infection, with several barring passengers who have been to mainland China in the past 14 days.

Royal Caribbean has canceled eight cruises out of China through early March and will "deny boarding to any individual who has traveled from, to or through mainland China or Hong Kong in the past 15 days." It will offer those people full refunds, the company said in a statement. It will also conduct health screenings for all China or Hong Kong passport holders as well as on guests who report feeling unwell or demonstrate any flu-like symptoms.

Japan's Health Ministry said that 20 people on board the Diamond Princess had been infected.

The rest of the passengers on board will remain under quarantine for at least 14 days, "as required by the Ministry of Health,"the cruise company's statement added.

The cases were detected after medical officials went room-to-room to check each guest's temperature and condition, Japan's health ministry said in a statement. Those who showed symptoms were subject to further testing.

More passengers than expected needed to be temporarily quarantined while being tested, the statement said. More than 100 test results are still pending, it added. The company also said the first phase of screening of all the passengers on board has been completed.

Spencer Fehrenbacher, a traveler on the ship, told CNNhe was tested because he complained about a sore throat and fever last week.He said swabs were taken from the left and right side of his throat.

Fehrenbacher, a US citizen living in Tianjin, China, and studying for a master's degree there, said he was in good spirits. He is on the cruise with his roommate from Tianjin and two other friends.

"The Princess crew has been incredible in their support and communication up to this point," he said. "They're providing complimentary internet to everyone on board to ensure that everyone is able to communicate with family and friends."

Ships are considered particularly at risk from outbreaks, due to the close-living quarters of passengers and crew.Researchers are still unsure exactly how the coronavirus spreads and how infectious it is.

Chinese officials had previously said that patients can be infectious even if they are not presenting symptoms. An early study on asymptomatic transmission of the virus published last week in the prestigious New England Journal of Medicine appeared to confirm Chinese health officials' assessment.

But public health officials now say the report may be flawed. Interviews with the Chinese patient at the center of thestudyrevealed she may have actually had mild, nonspecific symptoms.

An important factor yet to be determined is whether the Wuhan coronavirus spreads via the fecal-oral route, like norovirus and severe acute respiratory syndrome (SARS), according to Dr. John Nicholls, a clinical professor in pathology at the University of Hong Kong.

Norovirus is a contagious stomach bug that causes vomiting and diarrhea that is notorious for infecting cruise passengers.

Viruses like norovirus spread so quickly on cruises because "you've got so many people in a crowded area and people are sharing areas, touching places," Nicholls said.

The World Dream is being held in Hong Kong's Victoria Harbour as a precautionary measure, after three former passengers who took a World Dream cruise from January 19 to 24 to Vietnam were found to have tested positive for the coronavirus, the ship's operator, Dream Cruises, said in a statement.

The more than 4,000 passengers on that journey disembarked at two stops -- in Nansha in southern China and in Hong Kong -- on January 24 after the cruise to Vietnam, the Hong Kong Department of Health said at a news conference Wednesday.

Dream Cruises said it was attempting to contact all the passengers who had been on the January 19 to 24 cruise "to inform them of the situation and to remind them to seek professional medical assistance at their local Centers for Disease Control and Prevention or health authorities should any symptoms arise or if they have any questions."

The crew from that voyage, however, stayed on and the World Dream then picked up a different set of passengers before arriving in Hong Kong Wednesday morning, Hong Kong authorities said.

The current group of passengers got on for another itinerary, but the exact stops are unclear. Dream Cruises and its parent company, Genting Hong Kong, did not reply to CNN's phone calls and emails seeking clarification. There are currently more than 1,800 passengers and 1,800 crew on board, Hong Kong authorities said.

Hong Kong's Health Department said Wednesday some 30 members of the crew reported feeling sick, but all are in stable condition. Three who reported fevers are in isolation in a Hong Kong hospital for further testing.