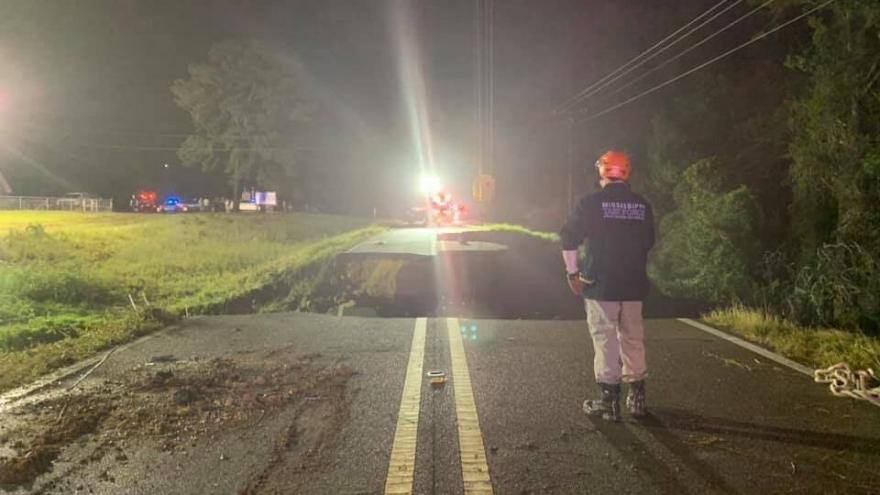 State Troopers along with various other agencies are at the scene of a road collapse in George County, MS on Highway 26 near Crossroads Road.

(CNN) -- Two people were killed and 10 others injured after part of a highway washed away Monday night near the town of Lucedale, Mississippi, officials said.

The incident occurred on the two-lane Highway 26 in George County, Trooper Cal Robertson of the Mississippi Highway Patrol told CNN on Tuesday. The washout was likely related to rain from Hurricane Ida, he said.

Seven vehicles went into the hole created by the washout, according to Robertson. It's about 50 feet in length and 20 feet deep, he said.

"I've never seen anything in my 23 years in law enforcement like this," he said.

Three of those injured are in critical condition, he added.

Highway 26 is a main artery between Mississippi and Louisiana, the George County Sheriff's Office told CNN.

Mississippi has been battered by torrential rain from Ida, which made landfall in Louisiana as a Category 4 storm on Sunday. According to satellite and radar estimates, the area had seen 10 to 13 inches of rain since the storm began, with isolated higher amounts. Monday night, the National Weather Service warned that 2 inches of rain an hour were falling in the area. This, on top of already saturated ground, led to flash flooding in and around Lucedale.

Nearly 60,000 customers in Mississippi remain without power due to the storm, according to PowerOutage.US.