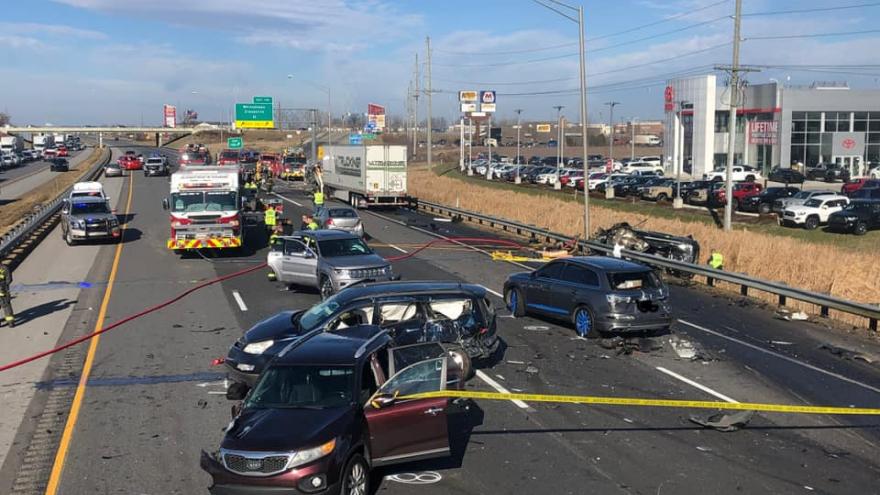 (CNN) -- Two women and a baby were killed in Indiana on Sunday when a semitractor-trailer smashed into eight vehicles, police said.

Matthew Lewis Small, the 34-year-old driver of the semi, told officers he was driving on Interstate 65 and looked away from the road to set his coffee mug down when he ran into the cars that had been slowing down, the Boone County Sheriff's Office said in a news release.

Small has been charged with three counts of reckless homicide and booked into the Boone County Jail, the sheriff's office said. CNN has not yet determined whether Smalls has an attorney.

Witnesses told officers a fire broke out after one vehicle was pinned against the guardrail by the semi and another was pushed over the guardrail and flipped over, the sheriff's office said.

The incident happened northbound on I-65 near the Zionsville exit, north of Indianapolis, the sheriff's office said.

Fourteen people were taken to nearby hospitals with non-life threatening injuries.

"Two people, from the vehicle pinned against the guardrail, were pronounced dead at the scene. Later it was discovered that a third person, an infant, was also deceased inside of the same car," the sheriff's office said.

The baby was identified as 1-year-old Hadley Tomey. The other two victims were Mariah Tomey, 21, and Kaylee Kirk, 19. The sheriff's office said they were from Lebanon, about 10 miles from the scene of the accident.

"Please pay attention to your driving when operating a motor vehicle," Nielsen said. "Give yourself plenty of room to have a way out, put down your phone or other objects, DO NOT drive distracted or impaired! Keep these families in your thoughts and prayers."