Two injured as helicopter crashes into the ocean near Miami Beach 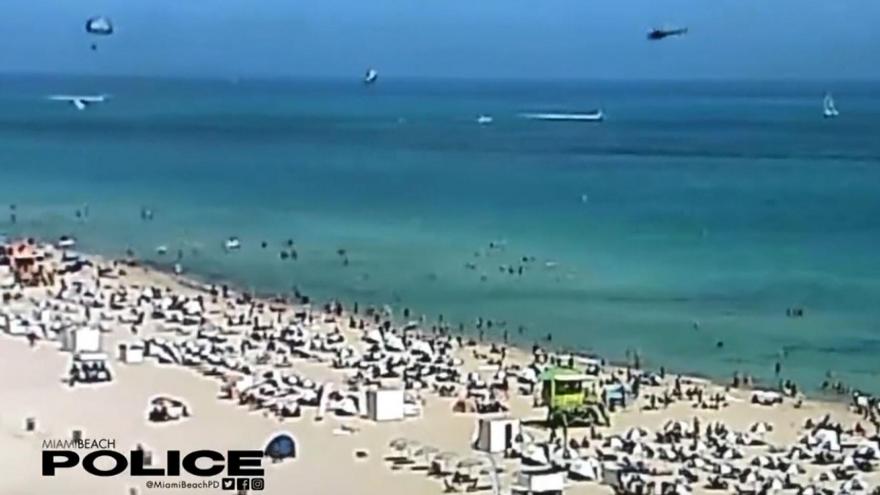 Miami Beach Police shared a video on Twitter of a helicopter falling into the Atlantic Ocean on Saturday, February 19.

(CNN) -- A helicopter crashed into the Atlantic Ocean near the Miami Beach shore on Saturday, according to a tweet by Miami Beach Police.

Two passengers were transported to Jackson Memorial Hospital, police said in the tweet. Their conditions were described as "stable." A third passenger was not injured in the crash, according to Miami Beach Police Public Information Officer Ernesto Rodriguez.

Police said that there were three people on board the helicopter when the crash occurred, but it's unclear which person was the pilot.

"This afternoon at 1:10 p.m., MBPD received a call of a helicopter crash in the ocean near 10 Street. Police and @MiamiBeachFire responded to the scene along with several partner agencies. Two occupants have been transported to Jackson Memorial Hospital in stable condition," police said.

A video accompanying the tweet shows a helicopter falling into the ocean near a populated area of beachgoers and swimmers.

The Federal Aviation Administration (FAA) is ?responding to the scene and officials have closed off a two-block stretch of the beach between ninth and 11th streets, police said.

The helicopter is a Robinson R44, according to a statement from the FAA obtained by CNN. The crash occurred under "unknown circumstances," the FAA said.

"The FAA and the National Transportation Safety Board will investigate. The NTSB will be in charge of the investigation and will provide additional updates," the statement reads.

Beachgoer Sean Adams, who was on vacation at Miami Beach with his wife from Las Vegas, described the crash to CNN affiliate WPLG as a "harrowing experience."

Adams, who is an aircraft mechanic, told WPLG that the helicopter went "back and forth over the deep water several times." After it crashed, the helicopter started tipping and the "whole beach ran to the scene," he said.

"These are things you never want to see or talk about," he said. "It was 50 yards from the beach, right next to everybody. It was crazy that nobody got hurt."

Adams said the pilot exited the plane and the passengers were "somewhat unconscious" and "in shock," as they were being helped out of the helicopter.

Another traveler, Ana Diaz, was swimming in the ocean when she heard her family calling for her to come to shore as they watched the helicopter descend, she told WPLG.

Diaz, who was visiting Miami with her family from Colombia, said she was just six or eight meters away from where the crash took place. She described the crash scene as one from a "movie" with extremely loud noises as the aircraft hit the water.

"I was really scared and I was swimming towards my family," Diaz told WPLG. "I was very worried about it and it was a very tough moment."