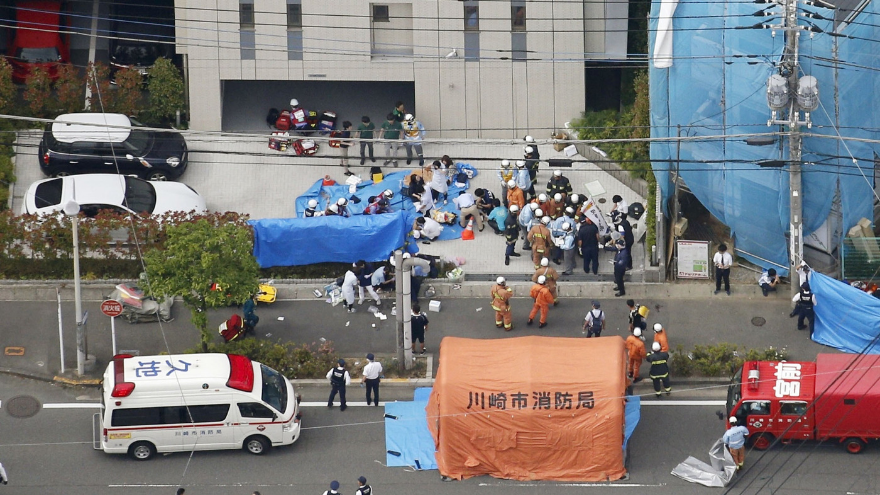 This aerial photo shows the scene of an attack in Kawasaki, near Tokyo. Source: Kyodo News/AP.
By Yoko Wakatsuki, Junko Ogura and Miki Lendon, CNN

(CNN) -- Two people, including a 12-year-old girl, were killed and 15 other children hurt in a stabbing spree in Japan on Tuesday -- a rare act of public violence in a country considered one of the safest in the world.

The attack took place near a park in the city of Kawasaki, about 13 miles (21 kilometers) from Tokyo, authorities said.

Victims were taken to four different hospitals. A spokesperson at the Nippon Medical School Musashikosugi Hospital confirmed the young girl and a 39-year-old man died.

"We must keep our children safe at all costs," Abe told reporters. "I've instructed the related ministers to take immediate action to ensure the children's safety in going to and leaving school."

The suspected attacker also died from a "self-inflicted wound," Japanese public broadcaster NHK reported. Police officers previously told NHK that the man, believed to be in his 40s or 50s, had stabbed himself in the neck.

NHK reported earlier Tuesday that three people -- including an elementary school student -- were in critical condition. It's unclear if the girl who died was among them.

Several residents in the area said they were shocked that such an attackcould take place in what is usually a quiet town.

Kosuzu Sunayama, 26, who lives near to where the stabbings took place, said she could hear the screams from her home.

Mass stabbings are extremely rare in Japan. In 2016, 19 people were killed in a stabbing spree at a care home for disabled people -- the deadliest mass killing in Japan since the end of World War II.

Japan also strictly regulates weapons, and it's illegal for people to carry a pocket knife, craft knife, hunting knife or box cutter in public, according to the US State Department.

The Tuesday incident took place during US President Donald Trump's visit to the country. Speaking aboard a Japanese helicopter carrier, Trump said the American people grieved for the victims' families.