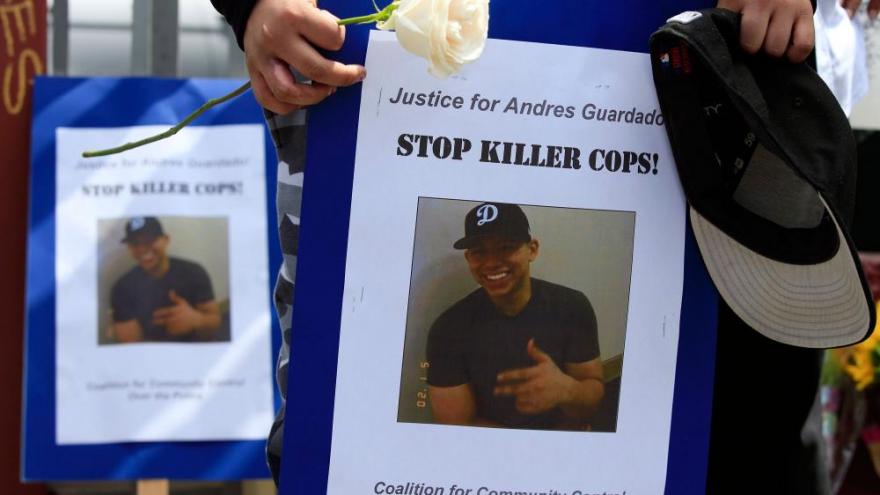 In this file photo from June 19, mourners hold images of Andres Guardado, who was fatally shot by a Los Angeles County sheriff's deputy, at a memorial site in Gardena, CA.

(CNN) -- The two Los Angeles County Sheriff's Department deputies involved in the shooting death of 18-year-old Andres Guardado in June have been relieved of duties in response to an unrelated traffic investigation, the department announced in a Friday statement.

"Both Deputies' peace officer powers have been suspended, pending the outcome of an investigation which stemmed from a traffic collision occurring on April 13th, 2020," the department said.

The statement did not name the deputies, citing an ongoing investigation and the department did not elaborate on the details surrounding the April incident. In June, attorneys for the two officers identified them as Miguel Vega and Chris Hernandez.

The FBI, the Los Angeles County District Attorney and the Office of Inspector General have been notified of the decision, the department added.

"We cannot comment further on details being it is a active investigation," said Shawn DuBusky, department spokesperson.

CNN contacted the California Highway Patrol, based on Los Angeles Times reporting that the CHP responded to the April incident. The CHP said no one would be available for comment until Monday.

CNN also reached out to the LA County District Attorney and to the LA office of the FBI but received no response.

In the Guardado case, Deputy Miguel Vega did not appear to testify at the November 30 inquest -- ordered by the county coroner -- and is out of the country until the middle of December. He indicated he planned to invoke his Fifth Amendment protection against self-incrimination, according to his lawyer, Adam Marangell.

Deputy Christopher Hernandez, Vega's partner during the incident, also did not appear at the inquest, but he filed a declaration saying, "if called, I would assert my Fifth Amendment rights and refuse to answer any questions."

Sheriff Alex Villanueva "did not instruct anyone to invoke or plead the Fifth Amendment," the department said in a statement to CNN.

On Saturday, Marangell told CNN, "Thank you for reaching out regarding a comment. At this time, I cannot add anything in addition to what has already been announced by the Sheriff's Department."

CNN has tried to contact attorneys for Hernandez, as well, but has received no response.

Guardado was shot five times in the back

Guardado was killed on June 18 after running away from sheriff's deputies at an auto body shop in Gardena. LA County Sheriff's Department Captain Kent Wegener said after the shooting that two sheriff's deputies saw Guardado in front of a business and he "reportedly looked toward the deputies" and "produced a handgun" before running down the driveway of the business.

The deputies pursued Guardado and caught up to him at the rear of the business, where one deputy fired six rounds.

"Guardado refused multiple commands not to reach for a gun, forcing deputy Vega to fire his weapon in fear for his life," Vega's attorney, Marangell, told CNN in June.

An independent autopsy ordered by Guardado's family found the teen was shot five times in the back. The Los Angeles County Coroner's Office came to the same conclusion. Guardado's manner of death was certified a homicide.

Transparency concerns surrounding the shooting have plagued the sheriff's department, which placed a "security hold" on the autopsy report in an effort to prevent its release. In a highly unusual move, Chief Medical Examiner-Coroner Dr. Jonathan Lucas released the report anyway.

Last month, the coroner ordered the inquest in Guardado's death -- the first in Los Angeles in more than three decades.

Two detectives from LA County Sheriff's homicide bureau took the stand, but invoked their constitutional right not to testify. None of the sheriff's officials are accused of any crime.

US Reps. Maxine Waters and Nanette Diaz Barragan called for California's attorney general to launch an investigation in the death as a civil rights violation.

"It is outrageous that the officers involved in the killing of Andres Guardado are now refusing to testify in the coroner's inquest into Guardado's death," Waters said in a statement released on December 1.