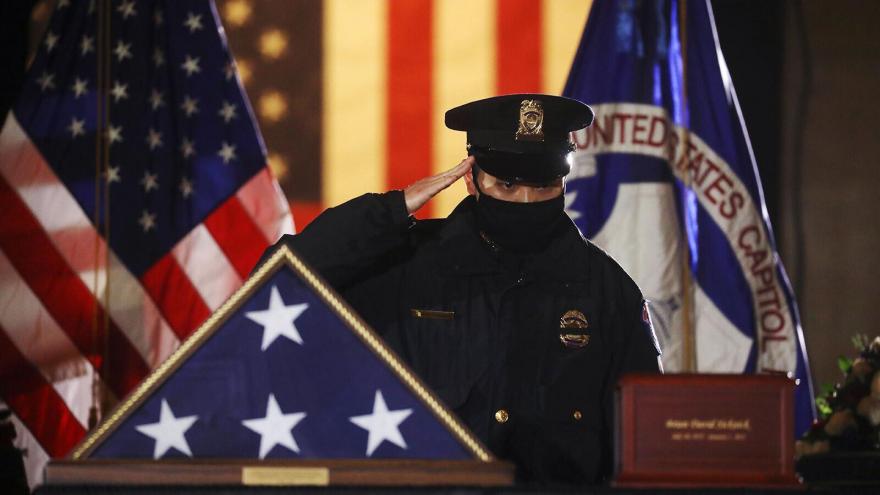 (CNN) -- Two men have been arrested and charged for assaulting US Capitol Police Officer Brian Sicknick, who died after responding on January 6 to hundreds of rioters who stormed the Capitol, the Justice Department announced Monday.

Julian Elie Khater, 32, of Pennsylvania, and George Pierre Tanios, 39, of West Virginia, are alleged to have worked together to spray police, including Sicknick, with a toxic chemical spray during the Capitol riot. Khater called what was in the cannister "bear sh*t," according to court records, but the Justice Department on Monday said the spray is unknown.

Investigators had struggled for weeks to build a federal murder case in Sicknick's death as they pored over video and photographs to try to determine the moment in which he suffered his fatal injuries. Investigators determined that initial reports suggesting Sicknick had been struck with a fire extinguisher weren't true.

"Officers Sicknick, Edwards and Chapman, who are standing within a few feet of KHATER, all react, one by one, to something striking them in the face. The officers immediately retreat from the line, bring their hands to their faces and rush to find water to wash out their eyes," the FBI wrote in court papers, describing the melee caught on video.

The two men are charged with nine counts, with several of them relating to violence and assaulting officers.

Khater and Tanios were spraying police in the face and eyes as rioters tried to remove bike racks being used as barriers to keep the crowd of pro-Trump supporters away from the west and south side of the Capitol building, court records allege.

About an hour into the riot, Khater grabbed for the chemical spray canister. But Tanios told him to "Hold on, not yet ... it's still early," the FBI said, recounting an open-source video of the scene outside the Capitol.

A Metropolitan Police Officer's body camera then caught Khater spraying him, Sicknick and another Capitol Police officer from a few feet away.

The court record noted that the police were temporarily blinded by the chemical -- as strong or stronger than anything they had been exposed to during police training, they said -- and needed help washing it from their faces.

The second Capitol Police officer to have been hit, identified in court records as C. Edwards, has had "lasting injuries" around her eyes including scabbing.

The court record doesn't mention Sicknick's death, or how the spray may have contributed to it.

For weeks after Sicknick's death, federal authorities said they were pursuing a murder investigation. Neither alleged rioters were charged with murder.

Tanios called into court Monday via zoom video conference, and he set in orange jail scrubs, wore a surgical mask and shook his head. The hearing was procedural, so he could be given an attorney following his arrest less than a day ago. Tanios is set to have a hearing on Thursday on whether he will stay in jail pending trial.

Prosecutors are seeking to keep him in jail pending trial, because he could flee or obstruct justice, and because they believe he is a danger to the community, court records say.

Khater also appeared before a judge Monday. His defense attorney said he plans to enter a plea of not guilty when he is arraigned, and hopes to be transferred to Washington, DC, quickly for further court appearances.

A native of New Jersey, Sicknick joined the Capitol Police in July 2008 and had served in the Department's First Responder's Unit. He also served as a staff sergeant for the New Jersey National Guard.

"The attack on the US Capitol and on our police officers, including Brian Sicknick, was an attack on our democracy," US Capitol Police acting Chief Yogananda Pittman said in a statement Monday. "Those who perpetrated these heinous crimes must be held accountable, and -- let me be clear -- these unlawful actions are not and will not be tolerated by this Department."

More than 300 people have been charged in connection with the January 6 assault on the US Capitol by pro-Trump rioters -- a figure DOJ now says could easily pass 400. Charges are also likely coming against additional members of the Oath Keepers, building on the existing conspiracy case that already has nine defendants, prosecutors said last week in court.

This story has been updated with a statement from the USCP acting chief.