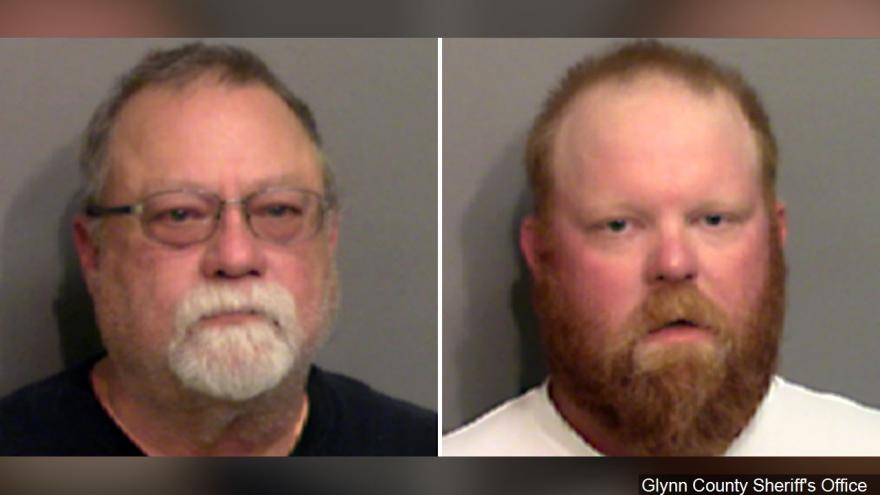 Gregory McMichael, 64, (left) and Travis McMichael, 34 (right); father and son arrested in connection to the death of Ahmaud Arbery, who was shot and killed while jogging on a residential street in south Georgia., Photo Date: Undated
By Steve Almasy and Angela Barajas, CNN

(CNN) -- Two men involved in the fatal shooting of Ahmaud Arbery near Brunswick, Georgia, have been arrested and face murder and aggravated assault charges, according to the Georgia Bureau of Investigation.

Gregory McMichael and his son, Travis McMichael, were taken into custody, the GBI said Thursday evening. They were booked into the Glynn County Jail.

The GBI said in a tweet it would hold a news conference Friday at 9 a.m. ET to discuss the case. It did not say when the McMichaels would appear in court.

The arrests come two days after a 36-second video that appears to show the deadly confrontation surfaced online.

Jasmine Arbery, Ahmaud's sister, told CNN's Chris Cuomo that the family feels a sense of relief over the arrests.

She told CNN she thought the shooting was a hate crime. Arbery was black and the men involved in the shooting incident are white.

Arbery, 25, was jogging in a neighborhood outside Brunswick on February 23 when Gregory McMichael, a former police officer, and his son chased him down, authorities said.

According to a Glynn County Police report, Gregory McMichael, 64, later told officers that he thought Arbery looked like a person whom theysuspected in a series of recent break-ins in the area.

In the video, three shots can be heard before Arbery is seen stumbling and falling to the ground.

Arbery family attorney S. Lee Merritt has said that the McMichaels saw a black man jogging through their neighborhood, assumed the worst and tracked him down and killed him.

CNN's attempts to reach Travis McMichael this week have been unsuccessful. Gregory McMichael has declined to comment because he's under investigation.

Two district attorneys had recused themselves from the case, though one said he thought the McMichaels had used their citizen's arrest rights.

A third DA, Tom Durden of the Atlantic Judicial Circuit, said this week he would present the evidence to a grand jury, once the coronavirus pandemic restrictions against them were lifted.

The GBI got the case Tuesday night when Durden requested the agency take over.

On Tuesday, demonstrators converged on the Satilla Shores neighborhood where Arbery was killed.

"You want to chase somebody down? We got over 100 bodies out here. Chase us down," said a man leading the demonstration. "We're a community. We're not going to keep allowing this to go on in Glynn County."

The alleged rash of burglaries

Gregory McMichael told Glynn County police that Arbery was suspected in "several break-ins," but no such string of crimes was reported in the weeks before the shooting. Police have yet to clarify whether Arbery is accused of any crime at a home that was being built.

The owner of an under-construction home, who is listed as a victim in the police incident report, said his surveillance system captured at least four short clips of a man who appeared to be Arbery "coming onto his property" February 23. He declined to share them with CNN and spoke on the condition of anonymity because he says he's been receiving death threats.

The man walked by the garage and down to a dock on the Little Satilla River, the motion-triggered cameras show, according to the homeowner. Asked whether they showed the man stealing or committing any other crime, he said they show him "trespassing."

In the more than seven weeks preceding the shooting, there was only one burglary report in the neighborhood, said Glynn County police Lt. Cheri Bashlor. A 9 mm pistol was stolen January 1 from an unlocked truck outside the McMichaels' home, she said.

Merritt said Thursday that Arbery didn't do anything that warranted a citizen's arrest. The attorney said if Arbery went by a house that was under construction it was at most trespassing.

On Tuesday, a local radio personality released video that appears to show Arbery's killing. The captured events match numerous accounts of the shooting -- including, in many respects -- that of Merritt, Waycross Judicial Circuit District Attorney George Barnhill and, as chronicled in the police report, Gregory McMichael. CNN has not verified who recorded the video.

It was taken was taken by a person in a vehicle that pulls up behind a pickup truck that has stopped in the road.

The recording has sound, but yelling in the video is unintelligible. It is not clear what happened immediately before or after the confrontation.

The video begins with Arbery, wearing a white T-shirt, jogging down the middle of street toward a pickup. Gregory McMichael is in the bed of the truck and Travis McMichael is standing near the driver's side door.

As Arbery approaches, he goes around the pickup on the right side, and just as he's passing the front of the vehicle, he makes a left and begins tussling with Travis McMichael.

A shot goes off, and the two disappear off the left side of the screen as Arbery appears to throw a punch. Gregory McMichael takes out a handgun but doesn't fire.

A second shot is heard as the men who are fighting are off-screen. As the men come back into view, both are still grabbing the shotgun.

Arbery appears to throw a right-handed punch at Travis McMichael's head as a third gunshot is heard.

Arbery recoils, as blood appears on his T-shirt below his left ribcage. He stumbles and falls in the middle of the two-lane road.

Travis McMichael walks away as his father runs toward them with his gun in his right hand.

The first shot went through Arbery's right palm, consistent with Arbery grabbing the gun barrel, Barnhill, who said he saw an autopsy report, wrote. The second shot is consistent with Travis McMichael "attempting to push the gun away from Arbery while Arbery was pulling it toward himself. The third shot, too, appears to be in a struggle over the gun," the prosecutor wrote.

Gregory McMichael had blood on his hands when police arrived, observed a Glynn County police officer, who concluded in his report that the blood came from Gregory McMichael turning Arbery's body over to check for a gun. The report does not say any were found.

The police report says a third man was involved in the chase. Merritt said he hopes that person will be arrested soon.

Merritt told CNN that Georgia's stand your ground law does not allow people to be "lying in wait."

"We don't believe that this was even arguably self-defense or a citizen's arrest, but even under their sort of peculiar theory, they can't set a trap," he said.

"They can't stop someone in the middle of the road, hop out with (guns), create a dangerous situation and avail themselves of stand your ground or self-defense. That's just not how the law's designed to work."

Benjamin Crump, an attorney for Arbery's father, said it was outrageous that it took more than two months for the father and son to be arrested.

"It's a travesty of justice that they enjoyed their freedom for 74 days after taking the life of a young black man who was simply jogging. Yet, tomorrow, on Ahmaud's birthday, his parents are denied the simple joy of celebrating with their son," he said.

Jasmine Arbery told CNN her family hasn't had time to grieve. On Friday, they will honor her brother and his birthday by going to Brunswick and releasing balloons.