Two men with parachutes leap from a hotel roof in Nashville 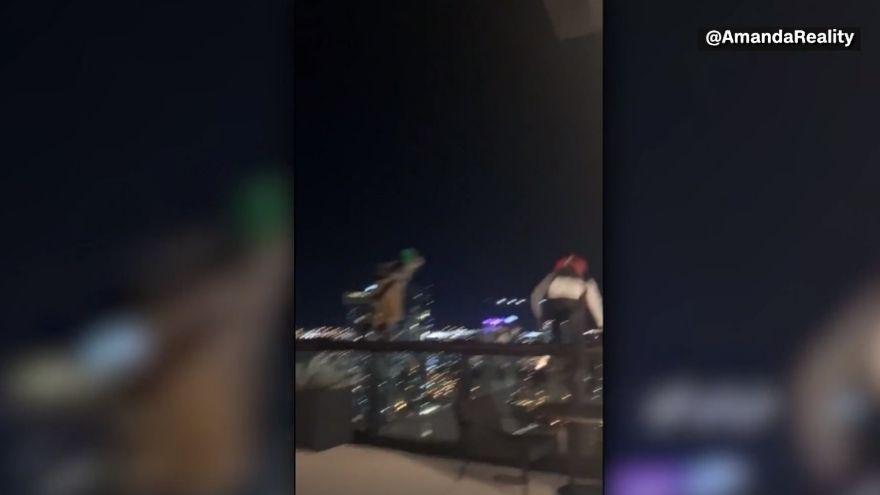 (CNN) -- Two men BASE jumped from the rooftop bar of the Grand Hyatt hotel in Nashville on Friday, causing a "mass panic" among the bar's patrons, police said.

Hotel security told police that two men approached the ledge of the rooftop bar on the hotel's 25th floor on Friday evening and jumped off it, according an incident report from Metro Nashville Police.

When the men jumped, patrons at the bar started screaming and there was a "mass panic," according to the police report. Witnesses looked over the edge of the building, and saw the two men parachuting across the road to an adjacent parking lot. Once they landed, they got into a parked car and drove off, according to the report.

A patron at the bar posted video footage of the incident on social media.

BASE jumping is an extreme sport and BASE is an acronym for building, antenna, span and earth. Unlike skydivers, who parachute out of planes, BASE jumpers practice their sport from fixed points like skyscrapers, cliffs or bridges.

Hotel security told police they believed the men may have been guests at the hotel and, according to the report, video of the incident was provided to police. The identities of the men are unknown.

The rooftop bar is open to both hotel guests and local patrons. The hotel chain confirmed the two men were hotel guests in a statement.

"The hotel immediately engaged local authorities, and the guests were subsequently evicted and banned from the hotel," the statement said. "We vehemently condemn this kind of reckless behavior, and further questions regarding this situation may be directed to the Metropolitan Nashville Police Department."