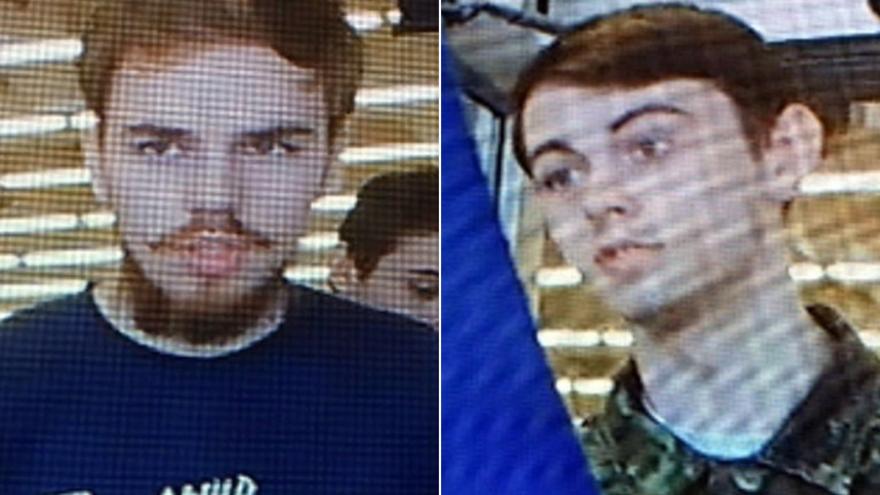 (CNN) -- Two Canadian teens who were believed missing are now considered to be suspects in the shooting deaths of a young American woman and her Australian boyfriend, as well as in the death of an unidentified man in rural British Columbia.

Kam McLeod, 19, and Bryer Schmegelsky, 18, are considered armed and dangerous, and members of the public should not approach them, authorities said. They were last seen in northern Saskatchewan — about a day's drive east of where the bodies were found — driving a gray 2011 Toyota RAV4, authorities said. The pair may now be in Manitoba, east of Saskatchewan, the Royal Canadian Mounted Police said.

The Manitoba RCMP confirmed Wednesday they had recovered the Toyota the suspects had used. They found it near the town of Gillam.

The RCMP sent more officers there and set up an informational checkpoint at the road leading into town, said Cpl. Julie Courchaine.

They are suspected in the shooting deaths of Chynna Noelle Deese, a 24-year-old American, and Lucas Robertson Fowler, her 23-year-old Australian boyfriend.

Fowler was living in British Columbia, and they were exploring the area while Deese was visiting him, RCMP Sgt. Janelle Shoihet said. Deese's mother, Sheila Deese, said the couple had been on a road trip through Canada up to Alaska.

In addition, police said a vehicle and camper belonging to McLeod and Schmegelsky was found burning on the side of Highway 37 on Friday. While investigating the fire, police discovered the body of an unidentified man more than a mile away, the RCMP said in a statement.

Authorities released a composite sketch of the man to assist in confirming his identity.

The man was described as a Caucasian with a heavy build, 50 to 60 years old with gray hair and a bushy beard, and between 5 feet, 8 inches and 5 feet, 10 inches tall.

The two teenagers are wanted in the deaths of all three victims. Authorities declined to say what new information led them to make the announcement, but it came just a day after the RCMP said it was a "possible" that their disappearance was related to the couple's death.

Cpl. Chris Manseau had said it was unusual for investigators in sparsely populated northern British Columbia to have two "complex and dynamic" cases at once.

The teens, both from Port Alberni, were traveling through British Columbia to the Yukon Territory to look for work, the RCMP had said.

Family of victim speaks out

Canadian police released surveillance video on Monday of Fowler and Deese, the young couple, at a gas station in Fort Nelson on July 13. The video shows the couple arriving in Fowler's van at 7:30 p.m. and departing the gas station at 7:47 p.m., investigators said.

Deese's mother, Sheila Deese, told CNN that she spent the night watching that video over and over again.

"Every night gets harder. The sketch was not bothering me, it was the video," she said.

Deese's older brother Stetson, 30, said he was struck by their loving embrace seen at 7:20 of the video.

"That video shows they were happy, healthy, and well on their way, to possibly getting engaged and all that. They didn't look like they had a concern in the world," he said. "They were a team and a unit. It was haunting to see that video, because they looked in great shape. There was nothing wrong."

Stetson Deese said that the pictures and videos of the couple only paint a glimpse of their reality.

"They were even nicer than they looked in their picture. They were attracted to each other because they were so much alike. Free spirited. Nothing stopped Chynna from her doing anything she wanted to do, going anywhere she wanted to go. She was living her life to her fullest," Stetson Deese said.

Fowler's father, New South Wales Police Force Chief Inspector Stephen Fowler, said his son was "having the time of his life" traveling the world with a woman he loved.

"I may be an experienced police officer, but today I'm standing here as the father of a murder victim. We are just distraught, this has really torn two families apart," he said on Monday.

"It's a love story that's ended tragically, it really is -- it's the worst ever love story because we now have two young people who had everything ahead of them, tragically murdered."