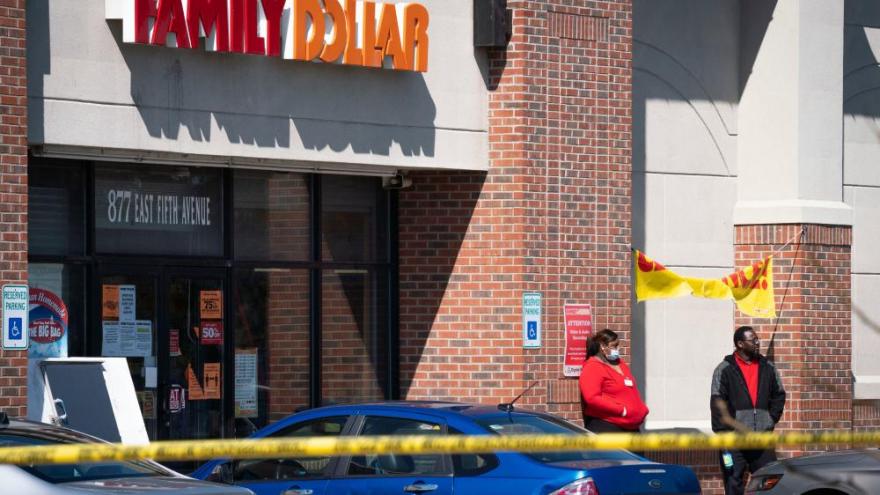 A fourth person has been charged in connection with the shooting death of a Michigan Family Dollar security guard who told a customer to put on a face mask, officials said.

(CNN) -- Two men charged in connection with the shooting death of a Michigan Family Dollar security guard who told a customer to put on a face mask have been arrested, officials said Friday.

The two were previously charged with first-degree premeditated murder, felony firearm and other charges but remained at large.

Authorities on Thursday arrested and charged Brya Bishop, 24, a fourth suspect in the case.

She has been charged with tampering with evidence, lying to police investigating a violent crime and being an accessory after the fact to a felon, according to a statement from the Genesee County Prosecuting Attorney's Office.

After Munerlyn told Brya Bishop she needed a mask, he got into a verbal altercation with Sharmel Teague, according to the prosecutor's office. Surveillance video confirms the incident, Leyton said earlier this week.

Brya Bishop left the store, but "Teague began yelling at Munerlyn who then told her to leave the store and instructed a cashier not to serve her," the prosecutor's office said this week.

Under an executive order from Gov. Gretchen Whitmer, all retail employees and customers have to wear a mask.

Footage shows that immediately after the altercation, Teague left in an SUV, but about 20 minutes later, the SUV returned.

Leyton said Thursday that Brya Bishop attempted to help her stepfather and brother after the shooting.

"Brya Bishop's attempts to shield family members will not be tolerated and we will likewise hold anyone else involved in offering shelter and assistance to Larry Teague or Ramonyea Bishop accountable under the law," Leyton said.

Brya Bishop is in custody at the Genesee County Jail. According to Deputy Chief Assistant Prosecutor John Potbury, she won't have a lawyer until her arraignment, which was scheduled for Friday morning.

Sharmel Teague has been arraigned on charges of first-degree premeditated murder and felony firearm and remains in jail with no bond. Her court hearing is set for May 14.

CNN left a message for her attorney Thursday but has not heard back.