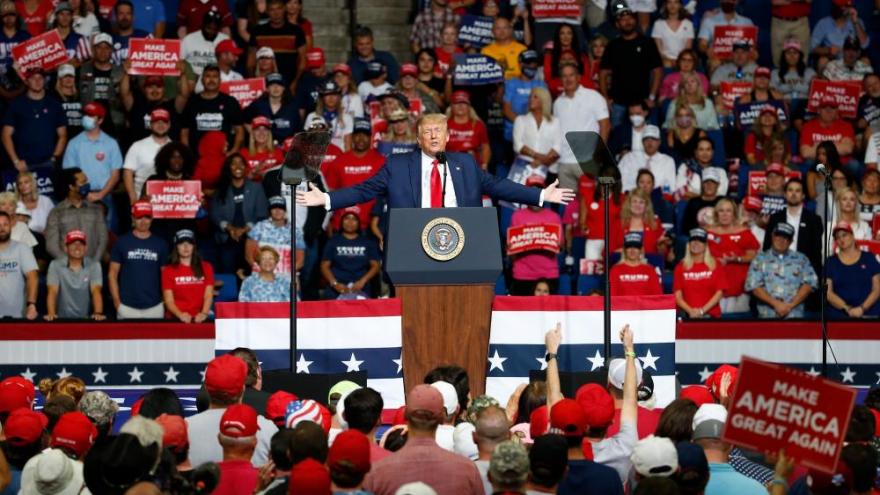 "After another round of testing for campaign staff in Tulsa, two additional members of the advance team tested positive for the coronavirus. These staff members attended the rally but were wearing masks during the entire event. Upon the positive tests, the campaign immediately activated established quarantine and contact tracing protocols," Trump campaign communications director Tim Murtaugh told CNN in a statement.

The two positive tests, first reported by CNBC, bring the total number of Trump advance team staffers in Tulsa who tested positive for coronavirus to eight.

Hours before Trump's Saturday rally, the campaign said that six staffers working on the rally tested positive for coronavirus.

Murtaugh said in a statement then that "per safety protocols, campaign staff are tested for COVID-19 before events. Six members of the advance team tested positive out of hundreds of tests performed, and quarantine procedures were immediately implemented."

"No COVID-positive staffers or anyone in immediate contact will be at today's rally or near attendees and elected officials," he said.

Attendees at Trump's rally were not required to wear a mask or practice social distancing, despite the Trump administration's top public health officials stressing the importance of both measures in preventing the spread of coronavirus. Several administration officials at the rally did not wear masks, though campaign manager Brad Parscale was seen in one.

Those attending the rally had to agree to not to sue the campaign if they contract coronavirus, acknowledging the "inherent risk of exposure to COVID-19 exists in any public place where people are present."

"By attending the Rally, you and any guests voluntarily assume all risks related to exposure to COVID-19 and agree not to hold Donald J. Trump for President, Inc.; BOK Center; ASM Global; or any of their affiliates, directors, officers, employees, agents, contractors, or volunteers liable for any illness or injury," the disclaimer attendees agreed to read.

The Tulsa rally was the President's first since coronavirus shut down the country and halted all in-person campaigning. The President's reelection campaign had dismissed concerns about the ongoing pandemic, which has killed nearly 120,000 Americans, despite Oklahoma seeing a steady increase in its average of new confirmed cases per day leading up to the rally.

Fewer than 6,200 people attended the rally, according to the Tulsa Fire Department, which fell far short of what the Trump campaign was expecting. The Trump campaign is disputing that number.

Trump said at the rally that he had told his staff to slow down testing for the disease in order to conceal the discovery of more cases. Murtaugh, echoing advisers to the President, told CNN's Brianna Keilar on Monday that Trump's comments were "tongue-in-cheek," and an attempt at humor.